It’s Friday night and the witching hour is at hand. I have no wheels and I’m stuck on an army base. I’m sitting at a table in the NCO club surrounded by 5 colleagues. The place is dark. Even during the day, the dive is somber and gloomy.

I finished my basic training not too long ago and am now on 6 month course to become a company clerk, like Radar of MASH fame. Although, I am not likely be posted to a medical unit after I complete my trade course. Maybe I’ll be sent to an infantry battalion as a combat clerk?

I’m drinking, but I’m not drunk. I’m dead tired, but not sleepy.

We are all privates, except for a corporal. He decided to change careers and become an administrative clerk, so he is in our class. He is married and is crying in his beer. “I miss my wife” and so on. He wants to go home for the weekend and invites us to come along with him. He’s the only one with a car. What he really needs is a driver because he knows he is in no condition to drive, yet he’s oblivious to the fact that we’ve all been drinking.

I’m the first to oblige. The sergeant has been on my case all week. “Comb your hair!” “Do this!” “Do that!” I badly want to get away from the joint, if only for a couple of days.

Six spit-and-polish(ed) soldiers, (well make that five and one that is so-so, according to my sergeant), climb in a Ford Custom. We should really be turning in for the night. Three in front and three in back. The corporal sits in the front passenger seat near the door. I’m behind him in the back seat. Did I mention it’s 30 below outside in the dead of winter?

What Could Possibly Go Wrong?

We rejoice the moment we’re outside the gate as the MP looks at us drive away. He hadn’t seen the toilet paper we let unroll on the base before we got near his little guard house. The alcohol content in our bloodstream had prevented us from feeling the cold when we briefly rolled down the windows to do our lame deed.

The youngest of the bunch, who had not been drinking that much, volunteered to drive. There’s no traffic for 20 miles or so. The base is out in the sticks. It’s mostly dark until we get to the highway where there are lights at every exit and ramp. The booze and the fatigue catch up to us, except for me and the driver, which is surprising because the ride is pretty boring and should have put us all to sleep.

We drive through a large metropolis of about 3,000,000 people and the traffic has picked up – the highway is elevated and splits the city in half. Yet, we eventually make it through the city and the humdrum of the trip returns. It’s dark and there isn’t much to see except the odd car and the occasional big rig. Truckers like to drive at night because there are fewer of those pesky people conveyances impeding their progress on long hauls.

I’m starting to doze off but do not fall asleep completely. Suddenly, my spidy or 6th sense tells me to pay attention. I look back through the rear window. A dark blue Peterbilt pulling a nondescript silver trailer is coming upon us. The truck driver is not alone. His wife, or girlfriend, or mistress is sitting in the passenger seat. They are fooling around, like children play fighting. We are in the slow lane and the truck is moving faster in the passing lane. As the truck gets closer, you can see more clearly that the couple is still goofing off.

The driver of our car is doing his job and keeps to his lane.

Without warning, the truck veers and the trailer side-swipes us. Luckily, there is very little snow on the ground adjacent to the highway. There is no barrier or bumps of any kind either, just a smooth, even surface. The truck driver, too busy with his girlfriend, must have assumed that his rig was clear of us and that he could pull back in the slow lane. It was a perfect hit, like a well coordinated stunt you see in movies. He’d try that again a thousand times and would never be able to repeat the feat.

We skid for a while and finally come to a stop. Dazed and confused, the sleepy heads are slowly waking up, except for the guy in the back seat next to the glass-less window. Both the driver side and rear passenger side windows have been smashed to bits.

A concerned motorist following behind had stopped his vehicle and came running to our aid. He sticks his head through the opening of the rear door. He can see that we are all awake, except for the one guy closest to him.

He gently shakes the shoulder of the soldier who appears to be dead, but finally comes to. He starts laughing and turns to the rest of us. “Look, this guy is running besides the car.”

He then says to the Good Samaritan, “hey, what are you doing, man?”

It turns out that, in addition to drinking, our buddy had enjoyed some Acapulco Gold. Satisfied nobody was hurt, he told us he would try to flag down a highway patrol car. We thanked him before he left, now that we were all wide awake. The corporal inquired as to what happened and the young driver explained the sequence of events.

“There’s one problem, however,” the kid told the corporal.

“What’s that,” replied the corporal, visibly not happy.

“I know how to drive, but I never got a driver’s license.”

Reluctantly, the corporal tells the young soldier to switch places with him before the police arrive, even though he is afraid his insurance is going to go up. But there’s really no other choice. We all get out of the car to assess the damage. In addition to the smashed windows, the entire side of the car has been pushed in.

Ugly enough, the rear door does not open.

A lowly policeman arrives and the corporal is sitting in the driver’s seat. We tell him the story. To our surprise, he doesn’t have the car towed and decides to look for the rig instead. Still upset, the corporal decides to do the same and follows the patrol car. Maybe it was a hunch, but the policeman takes an exit a little farther away. There is a refueling station and bar near the ramp, and the rig that hit us is parked there. Our description must have been good enough because the policeman parks right beside the trailer.

We all examine the trailer for damage, but in the middle of the night, there isn’t much to see and there is no visible point of contact.

The policeman decides to go inside after receiving information on the owner of the trailer. The corporal follows him with our driver. I mean, passenger. The rest of us stay behind, just in case the trucker and his girlfriend return. They manage to find him inside the club, but he denies having ever hit us. The policeman can’t do anything, especially since there is no sign of an impact on his trailer. It would be our word against his. The patrolman says he is sorry and leaves.

We have a brief meeting and decide to go on, except for one. He wants to cut his losses and chooses to head back, which is closer to where we are than the final destination. He will find his way to the base, somehow. But the rest of us want to see the journey through to the end. In for a penny, in for a pound.

In all the excitement, we had forgotten how cold it was outside. We manage to scrounge some cardboard boxes from the bar and open them flat. They will be makeshift windows for the rest of the trip.

The engine is making a very unhealthy sound, as if to say “shoot me now and put me out of my misery.” And the wheels want to roll in every direction, except straight.

I’m sitting in the back with another guy. There are three up in front and the corporal is driving – he ain’t gonna let anybody else drive. The heater is going full blast, but we can’t even feel the memory of heat sitting in the back seat. Every half hour, or so, we stop and the two us get in front while the other two passengers get in the back. But the luck of the draw is such that I spend more time in the back seat, away from the heater.

The cardboard windows do nothing to keep the cold out. With the wind chill, our real enemy, the temperature is more like -50 or -60° Fahrenheit.

We arrive at the apartment building where the corporal lives, just as the sun is coming up. After the briefest of introductions to his wife, we are promptly ushered into the living room. A few blankets are thrown on the floor and they close the door behind us. An argument ensues between the corporal and his wife on the other side of the thin door. But fatigue has priority over listening to the muffled sparring that grows louder and louder.

I’m still shaking from the cold. If I had been wearing dentures, I would have put them on the coffee table and they would have kept on chattering for another three or four hours.

Did I mention it was his wife’s car? It’s a total write off. No longer would she experience her big in-line six-cylinder 4-door sedan, with a Cruise-O-Matic transmission that could do 0-60 in 17 seconds. Gone would be the nearly 42 inches of leg room in the front. But worst of all, she would no longer be able to enjoy her favorite music on her factory installed 8-track tape player. And I’m dreaming. I can still see the Quadraphonic cartridge of Tres Hombres by ZZ Top sticking out of the deck, and I can still hear La Grange playing.

We are suddenly awaken and my dream is cut short, right in the middle. Without much explanation, we are unceremoniously ushered to the bus station by her father. The wife had brought in reinforcements in the form of daddy, and the corporal is nowhere to be seen.

We start the long journey back to the base. As the comfortable seat and the smooth ride of the Greyhound bus lulls me back to sleep, I smile. At least I got away from the sarge for a little while. 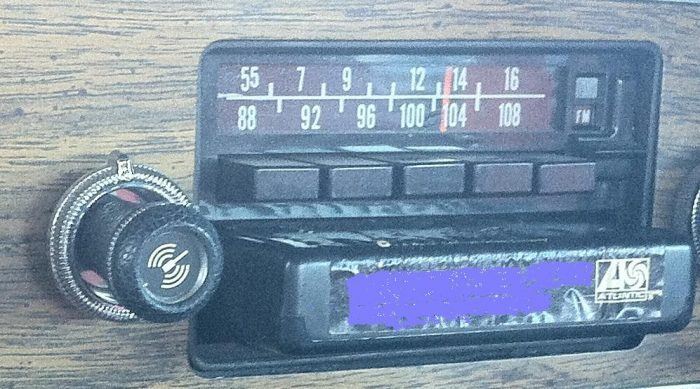