It’s just arriving now at local Honda dealers and it’s sure to be a hit with a new generation of consumers. You may have seen the 2016 Honda Civic Coupe TV ads. The Japanese automaker has hit a grand slam with this compact coupe – it’s an all-new design, with updated styling both inside and out.

Why would you want a coupe over the more practical Civic sedan?

Two reasons: It’s more stylish and it’s cool to own coupe. But the coupe still has some practical aspects to it. Earlier this week, we drove the 2016 Honda Civic Coupe Touring to see just how practical it is.

The 2016 Honda Civic has undergone a full redesign. A new sedan is also available – you can read our full review here. A new four-door hatchback body style is coming later, as well as a high-performance Si and Civic Type R.

Inside the Honda Civic Coupe an updated, modern interior is revealed. The dash, door panels, and console all have appealing, contemporary lines. Like the Honda commercial says, its made for a new generation who feel like they live in a square world. The interior reflects this message well. Honda succeeded in appealing to younger buyers when they designed this cabin.

It was easy to find the perfect driving position with the tilt/telescoping steering wheel and height-adjustable front seat. The sporty leather seats are comfortable and can be heated for extra comfort in colder climates. There’s plenty of soft touch materials, mixed with some hard plastics, for an overall quality feel throughout.

The one downside? We thought the touchscreen interface was slow to respond to inputs.

In the back, there’s more room than you would expect for a coupe body style. The seats are comfy and there’s room for two adults with ample legroom. Rear passengers will feel a bit closed in, but it won’t be an issue for the kids. Seat backs can be lowered easily with two convenient switches for extra cargo carrying ability.

The trunk is also larger than expected for a compact coupe. There’s room for two suitcases or a handful of bags while on a shopping trip.

The Honda Civic Coupe Touring is powered by a turbocharged 1.5-liter four cylinder engine, making 174 horsepower and 162 lb-ft of torque. This engine is new and the turbo is a first for Hondas sold in the United States. It comes mated to a continuously variable automatic transmission (CVT).

We immediately noticed how this is a sporty coupe but visibility is somewhat limited for the driver because of the raked roofline. The multi-view rearview camera is a welcome addition for backing up and we were happy to have it this week because of the visibility issues.

This Touring model gets the new 1.5-liter turbo engine and it’s a sweet powerplant. It provided us with brisk acceleration even as we pushed it hard up into the mountains west of Denver. The coupe was eager to please as we maneuvered around the mountain corners near Evergreen. Through the tight curves we found out the Civic Coupe’s strong point is agility. It feels sportier than the sedan we tested earlier this year with added stiffening around the front and rear suspension mounting points, as well as slightly firmer suspension tuning overall.

Body lean was minimal and the coupe responded well in hard cornering. The electric power steering is exceptionally quick too. The 2016 Honda Civic Coupe ramps up our fun-to-drive meter to a 7.5 out of 10. 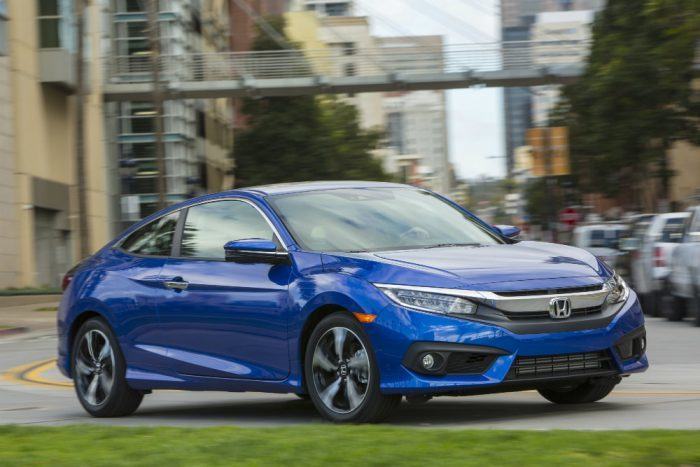 Granted, it doesn’t perform like a rear-drive sports car. The front-drive Civic has some typical understeer and wants to go straight rather than grip the corner. Journalists like us are probably the only ones who care about this. Most will love the sporty driving dynamics – you won’t be taking this car to the track anyway.

On the highway and city streets, the Civic Coupe is a joy to drive. It’s small, maneuverable, and the ride is comfortable. Like the sedan version, Honda lowered the noise level coming in from the outside and it’s one of the quietest compacts on the market.

The CVT automatic is, well, still a CVT, but it’s paring with the 1.5-liter turbo seems to work better than most. It offers a Sport mode that seems to boost engine speed a bit to make the turbo’s sweet spot more accessible. We like the new engine and it kept pulling at altitude like a more expensive sports car. It’s a good marriage of sport and economy.

The new 2016 Honda Civic Coupe is stylish, comfortable, and you can use it during the week to make the drive not so mundane. The sporty coupe will make the commute fun and you can transport people and cargo like a typical sedan. It does a lot of things well and it has impressive looks. You may originally buy this model for its styling, but you will quickly find out it’s also a practical compact.