Letter From The UK: The Gentleman Flyer

Slowly I banked into a lazy left turn and heard the engine pick up as I opened the throttle. As my speed increased, I adjusted my goggles and hunkered down to shelter as much as possible from the power of the wind.

Suddenly they were on my tail, coming at me from out of a low sun at my back. Hastily, I reduced my speed to allow the police car to roar past on its way to an unknown emergency, somewhere on the outskirts of Malvern.

Schoolchildren on a crosswalk giggled as they observed me snuggled in my Morgan 3 Wheeler.

They wondered how such a relic of history could still be on the road.

They also admired it.

Table of Contents show
Morgan: A Suitable Case For Treatment?
The 3 Wheeler
The Getting In
The Car
The Experience

Morgan: A Suitable Case For Treatment?

Malvern is a small, quintessentially English town nestled in the countryside in the County of Worcestershire. It is popular with antique hunters and home to the venerable institution that is the Morgan Motor Company.

The company was started in 1909 when H.F.S. Morgan completed the first three-wheeled ‘Morgan Runabout.’ Since then, this distinguished business has produced a variety of sporting motors, renown throughout the world as a benchmark for hand-built quality. It is a testament to their expertise that Morgan, as an independent brand, have continued to prosper, despite the era of driverless cars approaching.

If there is any one car that can take you back in time to the days when motoring was an adventure, it is this one. No bells, no whistles; designed to bring back the passions of driving as it should be: The sense of piloting a piece of precisely engineered machinery.

Lift the catch on the ‘bomb release’ starter button and it’s easy to feel the thrill as the front-mounted, twin-cylinder engine detonates to life.

Power comes from a 1983cc ‘V-Twin’ fuel-injected motor. This in turn is mated to a tried and tested Mazda five-speed manual gearbox. There are two small leather bound bucket seats, a stick-shift, and a dashboard with aircraft dials that tell you only what you need to know.

Unless you have the flexibility of a 1980’s Eastern European gymnast, mounting the 3 Wheeler is something of an art form. There are no doors. The driver and passenger must step over the side of the car and slide down into the seat in the manner of a Formula One driver.

Save the ballgowns for the Cadillac Escalade and cut back on the Ben & Jerry’s.

The fit is snug.

The driver sits low in the car and the sensation of speed is instantaneous; the performance extreme. 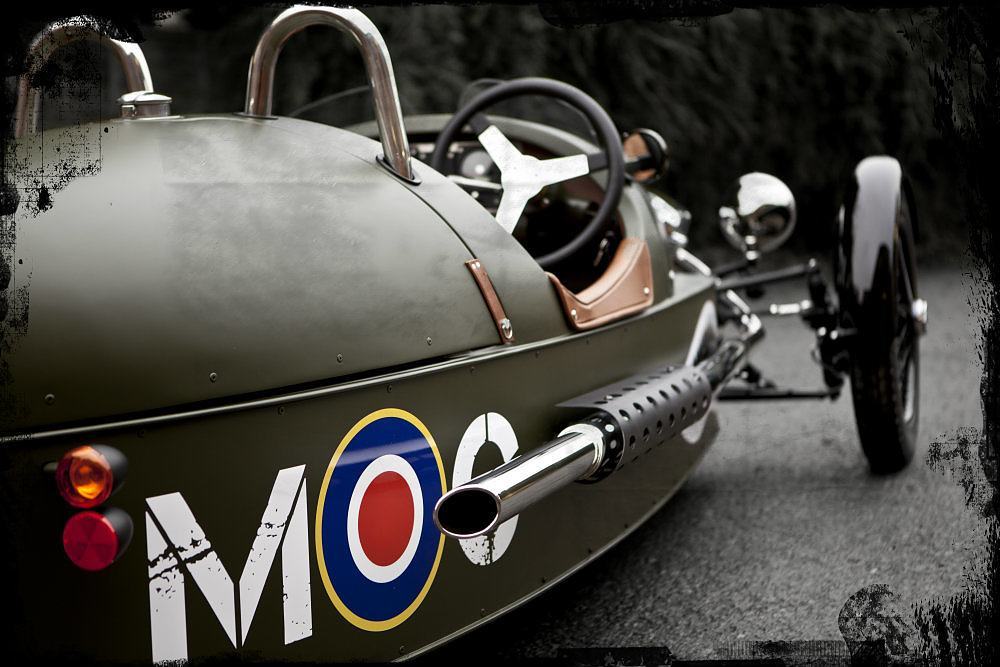 The whole car is hand-built by craftsmen around a tubular steel space frame, and as such, no two are exactly the same. However, The Morgan 3 Wheeler is designed for one purpose alone: to make driving fun! With 140 N m of torque the motor provides maximum power at minimum revs. The car seems to respond as much to thought as physical movement.

A unique experience in more ways than one.

When coupled with a weight of 1,157 pounds, the latest Morgan 3 Wheeler provides an unrivaled power-to-weight ratio, despite only having 82 bhp on paper. Sixty miles per hour arrives in just under six seconds. The Morgan has a top speed of 115 mph, and believe me, that is plenty when you are as exposed as this.

Those of an ecologically pure persuasion may choke at emissions of 215g/km (European standard), but this will have to reduce as the new 2017 European Union regulations come into being, sucking the fun out of life like Harry Potter’s dementors.

Fortunately Morgan has come up with an awesome 61 bhp electric version. Not as fast perhaps but at least you can limit your carbon footprint. It has no equal. The Morgan 3 Wheeler is not a motorcycle. Three wheels drive differently than two. You do not lean through corners. It requires an adaptation of your usual driving style. The vehicle drives like nothing else on the road, as you might expect with something short of the usual four wheels.

The unassisted steering is brilliantly weighted, and as you notice the eye level skinny front tires, you are rewarded with superb feel and feedback.

Safety is the driver’s responsibility entirely. There are no automatic safety aids so three-wheel drifts are available on demand. Wet roads demand caution. This is unsophisticated, seat-of-your-pants motoring that brings out your inner auto pioneer.

Above all, driving the Morgan 3 Wheeler is about sensations. The driver sits low to the ground, possibly leaning a nonchalant elbow over the leather padded sill. The diminutive screens don’t do much to protect you from the wild wind, although they do help to deflect potential insect strikes. Small winged creatures do their best to get you in the eye, you know.

Some form of eye protection is essential: goggles are the preference, for that authentic look.

Below you the rushing road, above the big, open sky. The sound that you hear is your own elemental heart pounding. Driving the Morgan 3 Wheeler is as close as you can get to flying a Sopwith Camel without leaving the ground, which is just as well.