Memory Lane: The Fury and The Challenger

It’s early Sunday morning. I can’t sleep and I’m bored. I live in an apartment building and soundproofing wasn’t part of the architect’s or the developer’s plan. I don’t want to turn on the TV and wake up half the building. Last thing I need is some irate neighbor banging on my door.

So, I’ve got to move, in more ways than one.

I decide to go for a ride and check out a 20 miles stretch of highway that has been repaved. I get in my two-tone blue, 1976 Plymouth Fury and slowly drive away. It has a 360cid motor with a 4-barrel carburetor, and a great transmission.

The highway is near my house and the drive is pleasant with nary a car on the road. When I reach the end of the new black top, I turn around to head back home. As I drive up the ramp to get on the highway, I see a bright orange Cuda or Challenger drive by. I could never tell those apart, but it has a black stripe with 440 on the side of the rear fender. I think to myself that I can take this 6-pack toting dude or dudette. When I was a teen, the older sister of one of my friends drove a Mustang Mach I and my aunt drove an AMX. I thought that they were the two coolest women on the face of the earth. Whoever is driving the 440 is wise to this wannabe. As I accelerate so does the driver of the orange car. Except for the two of us, the highway is clear.

The chase is on.

No time to enjoy the scenery now.

I grab the steering wheel a little tighter with both hands. I feel like inspector Frank Bullitt pursuing the ’68 Dodge Charger. It doesn’t take long for the trees on the side of the road to zoom by. The anticipation of catching the prey is exhilarating, except the R/T I’m after doesn’t stop in between takes to retrieve hubcaps that have popped off on the hilly streets of San Francisco. Unlike the City by the Bay, our playground is flat and freshly paved. I become tenser as we get past the speed limit.

What if a highway patrol car was hiding up ahead?

Nah! It’s too early in the morning, especially on a Sunday. I’m getting hot under the collar, and I don’t know if it’s because of the speed or my disappointment at not being able to get closer to the orange muscle car. The numbers on the speedometer of the Fury stop at 120. I have reached 100 miles per hour and I still can’t catch up to the 440. My car has over 125,000 miles on the odometer and the temperature needle is creeping up faster than the speedometer needle, which is now past 120mph.

But I’m young and foolish, so I press on.

There is a pin at about 125mph. The speedometer needle is pressed against the pin. The miles zip by and the temperature needle is as far as it will go in the “H” domain. I still can’t get any closer to my prey and we are already nearing town. I know when I’m beat and I decide to stop the chase. Besides, I will have to exit soon, I rationalize, as if I couldn’t keep going.

It takes a while for the speedometer needle to leave the pin and indicate deceleration. I reach my exit. I make it home and park the Fury. What was I thinking, taking on a car that displays 440 on its sides? Still, I’m happy in defeat because I gave it my all, and so did the car. Thank you, Mr. Chrysler for a not so boring Sunday morn. I get out of the car and for some reason look back as I walk away. My coming in second in a race of two quickly fades. I notice something odd about the front driver-side tire.

I make my way around the car only to realize that all the tires are like that. It turns out the fiberglass belted tires I have on are not rated for anything, especially not for speed. Now, I have to buy four new tires. Regardless, it was worth it. But I never did get close enough to see who was driving the 440.

He or she must have had a good laugh at the pretender in the Fury. 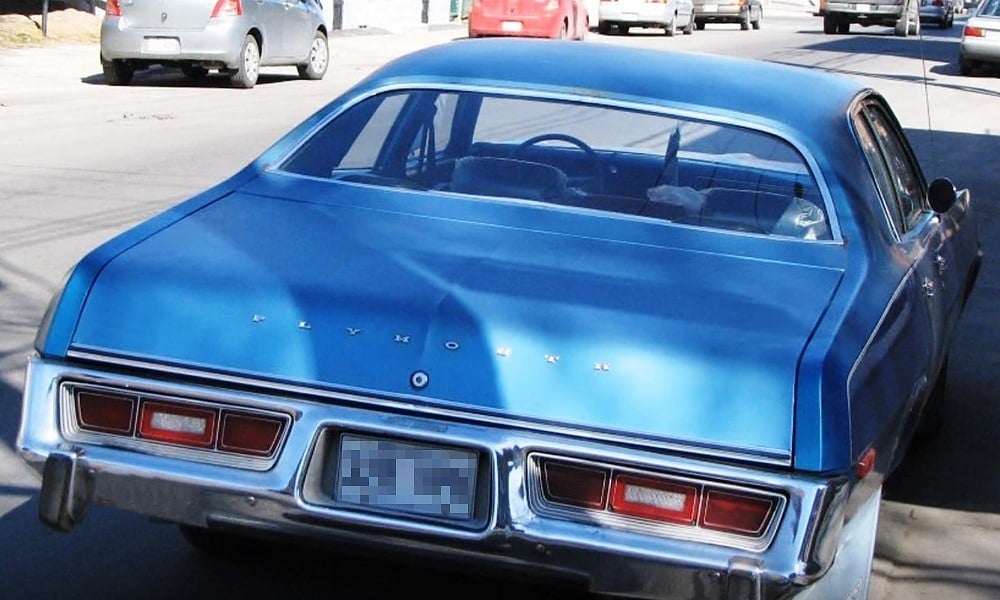