But, in this segment of the auto industry, there is no room for resting on laurels, and constant refinement is not only part of the game, but rather a way of life.

The 2017 Bentley Continental GT Speed remains vastly unchanged. However, in the name of constant refinement, the 2017 models do get a slight bump in power and gain a new Black Edition trim. The Black Edition trim, which can be optioned on both the coupe and the convertible, adds a bunch of dark exterior and interior accents. Trims around the windows, headlights, and the 21 inch rims are finished in gloss black.

The lower aero components, consisting of the front splitter, side skirts, and rear diffuser, can be painted in contrasting colors like Cyber Yellow or St. James Red. Carbon fiber trim is standard inside the Continental GT Speed. Customers can also trim the outer edges of their seats in color schemes to match the exterior.

The 2017 Bentley Continental GT Speed continues to be powered by the 6.0 L twin-turbo W-12 engine (a new version of the engine will debut in the next generation Continental). With a slight increase in the turbo boost throughout the range, the re-tuned engine now produces 633 horsepower and 620 lb-ft of torque (an increase of 7 horsepower and 20 lb-ft of torque over the 2016 model).

With the added power, the 0-60 mph time of the 2.5 ton beast drops by 0.1 seconds to 3.9 seconds. Top speed remains unchanged at 206 mph, making it the fastest Bentley model in the company’s history. Power from the 6.0 L twin-turbo W-12 engine continues to be routed to all four wheels via a quick-shifting, eight-speed automatic transmission.

As of this writing, Bentley has not disclosed the final price for the Black Edition trim package. However, considering that a 2017 Bentley Continental GT Speed coupe has a starting price of $265,000, many owners will not be too concerned about the package’s final price.

Expect the 2017 Bentley Continental GT Speed coupe and convertible to go on sale this summer.

Previous
Are Replica Wheels Really as Safe as OEM Wheels? 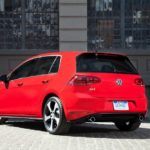