In the Detroit area, it’s not uncommon to spot a prototype car covered in black and white wrapping. I will see them on my trips, in and out of the city, on Interstate 94. If you head over to the Dearborn area and cruise through the Ford campus, you are likely to see many more.

These days, everybody carries a smartphone and it’s not difficult to snap a photo and upload it to social media. As automakers like Ford test on public roads, engineers are challenged with hiding these vehicle prototypes in plain sight.

Design is a common motivator for purchase, but for Ford customers, it ranks higher on the list.

“While design is the fourth most important reason for purchase in the industry overall, it’s number two only behind fuel economy for Ford,” said Dave Fish, Senior Vice President, Expert Services at MaritzCX, which conducts the New Vehicle Customer Study. “It’s not surprising Ford goes to extraordinary lengths to try to keep the wraps on its designs as long as possible.” Ford has looked at more effective ways to conceal their creations, opposed to the black vinyl applications that were once popular. Granted, the black vinyl is still used sometimes, but by and large, Ford employs vinyl stickers with patterns that trick the eye. The patterns conceal body lines and create an optical illusion, making it difficult to spot any particular vehicle details in a photograph.

This allows the automaker to conceal their confidential designs as they conduct testing in broad daylight. Think of it as an incognito car.

“The work we’re doing is crucial to Ford staying competitive in a constantly evolving industry,” said John LaQue, Ford Section Supervisor, Prototype Planning and Build. “When we make it to a reveal without a photo surfacing of a non-camouflaged car, we have all done our jobs.”

Unlike traditional vinyl cladding, the stickers don’t need to be made specifically for a vehicle and are easily attachable. The stickers are lighter weight too, meaning they allow for more accurate testing. Other bonuses come as the stickers wont’t trap heat or dramatically affect aerodynamics. They are also very durable.

Just the other day, I saw one of these chameleon cars in nearby Allen Park where Ford has a healthy base of operations. Like I said before, it’s not uncommon to see vehicle prototypes running around but for the car spy who wants to catch one before it’s released, it’s a different story. These stickers allow Ford and other automakers to stay ahead of those who may get just a little too curious. 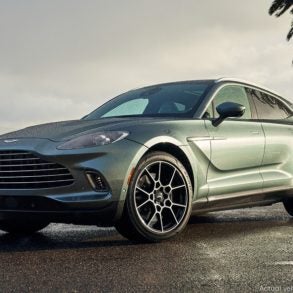