The series What Makes a Honda is Who Makes a Honda portrays the lives of more than 30,000 Honda employees in North America. One of the latest videos follows two Honda R&D engineers, Hideaki Takahashi and Kenton Williams, as they lead the Walking Assist program in the United States.

ASIMO, Honda’s advanced humanoid robot, has been instrumental for the Walking Assist program.

Takahashi, a native of Japan, worked on ASIMO prior to joining Honda R&D Americas in Raymond, Ohio, where he works on the Walking Assist Device. Williams is a graduate of MIT’s Mechanical Engineering program with a specialization in robotics. His interest in robotics began as an Ohio State University undergrad after attending a campus demonstration of ASIMO.

Williams was thrilled to have the opportunity to work with Takahashi years later and appreciates their cultural differences. The two make a remarkable team.

“Synergy is the best way to describe it,” Williams said.

Takahashi does not worry so much about their differing backgrounds. After all, both share a passion for using modern advances to help people with disabilities.

“We have a language barrier, and we also come from different cultural backgrounds, but of course, the common language is technology,” he said.

Honda’s “The Power of Dreams” becomes more than a catchphrase as people like Takahashi and Williams take the ideology to heart. Things like the Walking Assist Device create new hope for those that would greatly benefit from its capabilities.

“Walking is the most primitive, fundamental form of mobility. That’s why it is important for Honda to continue to work on this product,” Takahashi said. “I would like everyone to be able to walk – that is my wish.”

The video below is quite endearing . . . 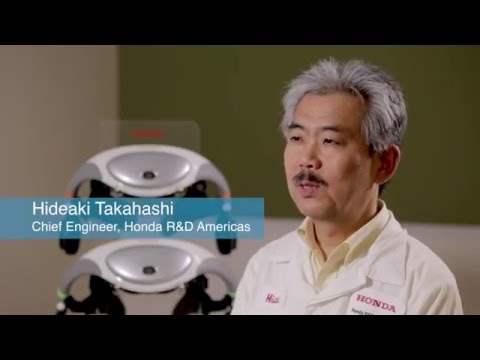