We had the 2016 Toyota RAV4 Hybrid for the weekend and here’s a quick look at the new hybrid from Toyota. If you want fuel-efficiency, this RAV4 small SUV is a fuel-stingy model. Don’t think that hybrid means slow on the go either. It’s peppy and has quick acceleration. With its hybrid powertrain, it’s almost in a class by itself too.

The 2016 Toyota RAV4 gets a mild refresh inside and out. Most of the changes went toward the interior, evidently in response to customer comments.

Also new is the RAV4 Hybrid option, which we drove this week.

The time we spent in the cabin gave us a comfortable feeling in the front seats. Visibility is excellent in the RAV4 and it feels like a bigger vehicle driving down the road. The cabin is attractive with its two-tone SofTex seating material.

The rear seating is sufficient for adults but they may find the rear bench a little flat and hard for extended trips. The kids won’t notice a thing. The seatbacks do recline and fold forward, making it a good cargo hauling machine.

The large rear doors make it easy for adults to slide in and to load larger items. Cargo volume is cavernous: 38.4 cubic feet with all seats up, and 73.4 cubic feet with the rear seats folded. The RAV4 is a practical car for families with kids and dogs.

The new RAV4 Hybrid is more powerful than the standard models and delivers an EPA-rated 34/31 city/highway and 33 combined mpg. This hybrid is powered by a 154 horsepower 2.5-liter engine coupled with the latest generation of Toyota’s Hybrid Synergy Drive system. The RAV4 Hybrid delivers a total combined output of 194 horsepower.

When we “pushed” the push button start there was just deafening quiet. We had to check to see if the car had really started. Once we got underway, the RAV4 Hybrid was responsive and had more power at take-off than many of the gas-only competitors. It doesn’t have the sporty driving dynamics like the Subaru Crosstrek Hybrid, and with 6.3 inches of ground clearance, its ride height is much lower than many small SUVs.

Although, it’s easy to see out of making it practical for families on the go.

The Toyota RAV4 Hybrid can accelerate up to 20 mph on battery power alone, if driven mildly like we did through the parking lot this week. After that, the gas engine kicks in. If you aren’t real easy on the pedal, the gas engine is likely to kick in at below 10 mph. We had fun playing with the car to see how far we could get on battery power alone. We pushed it hard up I-70 into the mountains west of Denver and it has plenty of power. Typical of Toyota hybrids, the gasoline engine connected to the Electronic CVT produces quite a howl when accelerating hard. We had the option of shifting the transmission into EV, ECO, and Sport modes. Around town in heavy traffic, EV works good for saving fuel, ECO otherwise for most city driving, and Sport as we got onto the highway. Each serves their specific driving style and worked well. Responses are a bit sharper in Sport mode, as the transmission makes downshifts smoother by blipping the throttle momentarily.

All-wheel drive is standard on the Hybrid, with a separate electric motor driving the rear wheels, making it a capable all-weather family hauler. The only other all-wheel-drive hybrid SUV in this price range is the 2016 Subaru Crosstrek Hybrid. It does return similar fuel economy as the RAV4 Hybrid, but it’s slower and doesn’t have as much room inside.

The 2016 Toyota RAV4 Hybrid offers ample interior space and a powerful, yet fuel-stingy drivetrain. It comes with Toyota’s reputation for reliability and has loads of standard safety features. It’s not the sportiest small SUV in its class, but it’s highly practical with lots of cargo-carrying ability. It offers families a fuel-efficient city hauler with all-weather capability. 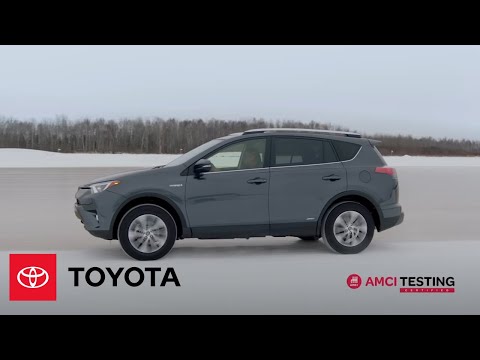