The Toyota Camry lineup gets a new model that bumps up the sporty character of the family sedan. It’s called the SE Special Edition. In past reviews of the Camry, we’ve been somewhat critical of its mundane driving dynamics. Will this new Camry SE Special Edition be different than the rest of the lineup?

Over the weekend, we drove the new 2016 Toyota Camry SE Special Edition. It came with a few sporty features that set it apart.

The rest of the Camry lineup remains relatively untouched except smartphone navigation has been added to the Entune Audio Plus system. The Camry SE Special Edition gets exclusive items like smoked taillights, a sportier gauge cluster, and blue interior accents.

The interior in the Special Edition is different than the rest of the Camry lineup with the unique blue stitching on the seats, dash, and gear shift handle. The seats also get a special blue inlay with a checkered pattern in the front and back. There are also Camry Special Edition floor mats up front. Sport seats in this model are more assertively contoured than in lower trims; they feel more snug, with greater thigh support.

The cabin feels refined, modern, and roomy. There’s more soft-touch surfaces than in the past, accented by the contrasting blue stitching, which enhances both texture and visual appeal. Ahead of the gearshift, an enclosed bin has space for personal items, with a USB port and a Qi wireless charging pad.

In the back, rear passengers can put down the center arm rest that includes two cup holders for those longer trips. The seats split/fold (but not entirely flat) for more cargo room if needed. Seats are well-padded and contoured and will seat two adults comfortably. There’s also good rear headroom.

This four-cylinder-only Special Edition is different than the average Camry on the road. It looks better with its flashy 18-inch wheels, rear spoiler, and chrome-tipped exhaust. But does it drive any different? That was the main question we had.

It comes with the Camry SE’s sport-tuned suspension which ramps up driver engagement a bit. It’s not a true sports sedan, but for those who like to drive, the Special Edition dials up the fun-to-drive meter to about a six out of ten. That’s saying a lot for the typically mundane Camry lineup. The 2016 Toyota Camry is more responsive to more driver inputs than previous versions.

It holds a tighter line when going around corners and the sport-tuned suspension keeps it flatter in the curves. It comes with the 178 horsepower, 2.5-liter four-cylinder engine which is not a powerhouse, but rather geared towards fuel economy, more so than sport.

For most drivers, the four-cylinder engine offers enough power for daily commuting which is what most will use this sedan for anyway. There was some strain pulling up I-70, but we were at 8,000 feet in elevation too. The 6-speed automatic transmission downshifts quickly and decisively and kept the revs up for passing.

Camry has traditionally been known for its comfort and quietness, and this model continues with those traits. Even the sport-tuned trim delivers a smooth ride along with its more confident handling. The SE’s brakes felt confident while wind noise was kept to a minimum at high speeds.

You can’t go wrong with Toyota’s dependability and value with the Camry SE Special Edition. We can’t say it’s a plain vanilla car anymore. Toyota ramped up driver engagement and this car is actually fun to drive. We would score the ride and handling above average for a family sedan. 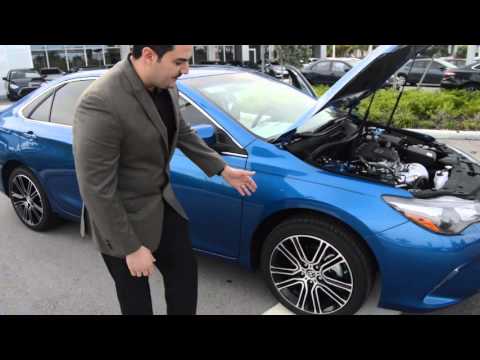