It’s about fuel efficiency performance but also driving performance, and this hybrid’s technology produces both in one package. This week we tested the top-of-the lineup, 2016 Toyota Camry Hybrid XLE sedan – let’s go for a ride, shall we!?

There is an auxiliary audio jack and USB interface too.

Stepping inside the Camry Hybrid, it looks like the standard XLE with just a few minor differences. For example, there are gauges that show what’s going on with the powertrain’s efficiency. The heated leather seats are comfortable and materials throughout the cabin were improved last year, along with the controls. Contrast stitching on the seats, door panels, dash, and gear shifter enhances both texture and visual appeal of the interior.

The cabin feels spacious and visibility is excellent. The enclosed bin is convenient for personal storage of electronic items, especially with the USB port. The 7 inch touchscreen’s virtual buttons are intuitive. It’s also surrounded by large buttons that are easy to use and understand.

In the back, there’s lots of legroom for adults. The seats are nicely contoured and have abundant padding for long rides. The setbacks fold down for additional cargo with a pass-through to the trunk. Because the Camry’s roofline isn’t raked like some, adults can expect good rear headroom.

The 2016 Toyota Camry Hybrid is powered by a 2.5-liter four cylinder engine, coupled with an electric motor and a battery pack. Combined output is a robust 200 horsepower. Power is delivered to the front wheels via a continuously variable transmission (CVT).

EPA-estimated fuel economy for the Camry Hybrid XLE is 40/38 mpg city/highway and 40 combined. It’s more than other hybrid models in the lineup likely due to the increased rolling resistance of its larger wheels and tires.

The fuel efficiency performance of the Camry hybrid is good and the driving performance is impressive. Acceleration is strong for a midsize hybrid sedan – it’s more than the regular Camry four cylinder and close to the Camry V-6 in terms of quickness. It’s because the electric motor produces torque that gets the midsize sedan moving quickly.

Toyota’s engineers have done an impressive job of turning the Hybrid model into a rather engaging car to drive.

We felt confident in its abilities on the open road as it delivered a smooth and quiet ride at higher speeds. The hybrid’s drivetrain is one of the most sophisticated and refined systems of its kind. It features Eco, Power, and Charge modes that are indicated on the instrument cluster. The transition from all-electric mode to the gasoline engine is smooth and seamless. We thought the hybrid delivered good fuel mileage even though we pushed it hard this week. We even experienced a heavy spring snow in the Rocky Mountains and the front drive sedan performed admirably in getting us safely to our destination.

The only complaint we have is the continuously variable transmission behaving much differently than the regular Camry’s traditional automatic. This is used to save fuel, but it holds revs at a constant high level during full acceleration bursts. We never did get used to it.

The Toyota Camry its still the benchmark when it comes to midsize sedan dependability and value. The hybrid offers both fuel efficient performance and a more engaging driving experience. There’s lots of competition in this segment but Camry offers families a good midsize sedan choice. The Camry XLE delivers a sophisticated experience with the more upscale cabin and plenty of technology features.

The Hybrid’s fuel economy and exhilarating personality is an appealing combination. 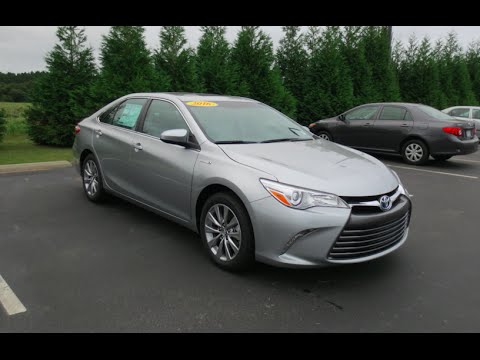