While commuting in heavy traffic over the weekend, we found out why consumers will be interested in the new Avalon Hybrid. As we creeped along in traffic waiting for an accident to clear, we were less stressed with the situation than we normally would have been. Patience is not my strongpoint, but driving this big sedan helped us deal with a difficult situation. The Avalon’s cabin kept us coddled in comfort and quiet as we waited.

If you normally commute in city traffic, this may be the idea car for you.

The 2016 Toyota Avalon Hybrid gets a some exterior tweaks in the front with a new grille and turn signal lamps. A wireless smartphone charging system is now standard for the upscale trims, and the Toyota Safety Sense package is available for the Limited trim we drove over the weekend.

As we sat in traffic we had time to admire our surroundings in more detail than normal. We could appreciate the spacious cabin and its high-quality materials like premium leather seats that are heated and cooled. The seats are upholstered in supple leather with real stitching. This time of year, we adjusted the tri-zone climate control on the seven-inch touchscreen and turned up the heated seats, front and rear.

We found a good radio station everyone could agree on, cranked up the 11-speaker JBL premium sound system, and didn’t care about what was going on outside. Our passengers in the rear had plenty of legroom and asked us to lower the power rear shade to block the sun. The back seats may be the best in the class. They were quite comfortable for lounging and enjoying the slow ride through traffic. One of our passenger’s cell phone needed charging and we used the wireless smartphone charging station, just below the touch-screen.

Cubby storage includes front and rear door bins, a roomy center console, and a leather-lidded bin, convenient for holding a something like a smartphone.

The 2016 Toyota Avalon Hybrid is powered by a 2.5-liter four-cylinder engine coupled with an electric motor, powered by a battery pack that’s hidden under the trunk. Combined, the two power units produce 200 horsepower. A continuously variable transmission (CVT) sends power to the front wheels. EPA estimates are 40/39 city/highway mpg and 40 combined mpg.

We found the Hybrid’s acceleration to be adequate but 200 horsepower isn’t much for the big luxury sedan. But when you are sitting in city traffic, you don’t need much power, and the battery pack kept us in electric mode a majority of the time anyway. We hardly used any fuel.

The cabin is exceptionally quiet and we barley noticed the transition from electric to gasoline engine. Under power, the CVT can cause the engine to drone during sustained acceleration, however.

When we did break free of the traffic jam, the Avalon Hybrid feels respectably secure and sure-footed at highway speeds. It’s also quite nimble in the corners for a big sedan, although the brakes took us a bit of getting used to. They can feel grabby, which is normal for a hybrid vehicle, as they are used to regenerate power to the battery. Depending on your driving preferences, this may or may not be an issue.

The Hybrid features three driving modes: EV, Eco, and Sport. EV mode allows running on battery power alone at speeds of up to 25 mph, Eco cuts down on throttle response and the climate control output. Sport mode is supposed to sharpen the Avalon Hybrid’s throttle and transmission responses, but we couldn’t tell much difference.

The 2016 Toyota Avalon Hybrid Limited sedan comes with a generous standard features list, a comfortable cabin, and impressive fuel economy. You’ll appreciate the attention to detail inside and you’ll be extra comfortable as you commute trough traffic. The efficiency of the Hybrid is ideal for stop-and-go traffic, and it can go 680 miles on a tank of regular unleaded fuel.

Overall, the Hybrid is just easy to drive and it doesn’t leave you stressed at the end of the day or after a long commute. 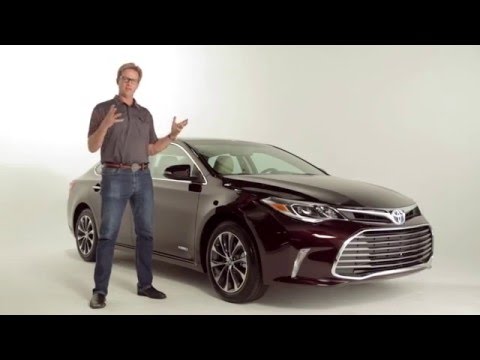