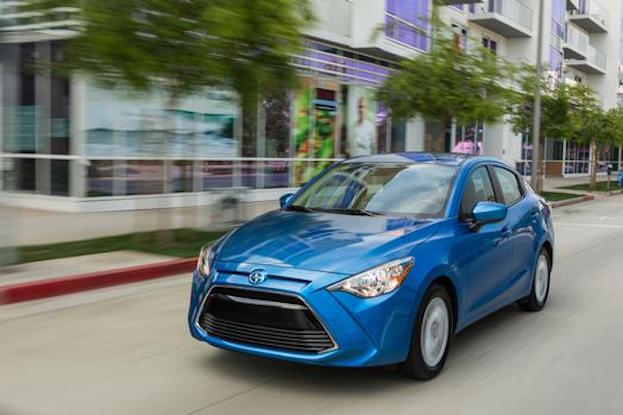 The United States isn’t getting the new Mazda2 subcompact or are we? Even though the new Scion iA 4-Door sedan has a Scion badge on the front and rear, this car has a healthy dose of Mazda “zoom” from the Mazda2. It’s essentially a rebadged Mazda2 with the brand’s fun-to-drive nature installed.

Toyota should be pleased at the partnership with their Japanese rival as Mazda helped produce a winning car for Toyota’s budget brand. This week we test drove the all-new 2016 Scion iA 4-Door Sedan with an automatic transmission.

The 2016 Scion iA 4-Door Sedan is all-new for the Scion brand. Toyota partnered with Mazda to bring out this new subcompact sedan, targeting a younger generation of buyers. It looks like they hit the mark.

We were impressed the moment we stepped into the iA’s cabin. The upright touchscreen and circular vents come right from the page of a Mercedes-Benz CLA-Class. It’s unusual to find this kind of material quality and fit and finish in a subcompact, costing less than $20,000. There’s lots of soft touch materials used throughout and the infotainment system features the kind of technology a high-tech generation is looking for.

The 7-inch touch-screen sits on the dash. It caught and kept our attention with its easy to read display.

Room up front is typical for a subcompact and rear passengers will feel a bit cramped on longer jaunts around town. For cargo, the rear seats do fold flat and open up to the sedan’s trunk.

The new Scion iA is powered by a 1.5-liter engine producing an ample 106 horsepower and 103 pound-feet of torque. The iA engine comes from Mazda, using direct injection with a high 12:1 compression ratio. The four-cylinder powerplant is tuned for fuel efficiency, with EPA estimates of 33/42 city/highway mpg and 37 combined mpg with the available 6-speed automatic. There’s a lot of Mazda’s fun-to-drive nature installed in the Scion iA sedan. The mission was to create a car that feels sporty and Mazda hit the target. Mazda was able to turn the basic MacPherson struts in front and torsion beam in rear, with rear drum brakes, into a sedan that’s high on the fun-to-drive meter.

The iA felt lively and light in the corners west of Denver as we tossed the subcompact around the tight curves. We would describe the driving dynamics as sporty and athletic when it’s pushed hard in the mountain roads.

Its ride is smooth for a light car and it feels bigger than its size would suggest.

The Scion iA is not a sports compact and it won’t blow the doors off with its acceleration, but it holds its own after you get up to speed. We put the 6-speed automatic into sport mode and kept the revs up for more spirited driving on the open road. A six-speed manual gearbox is available for driving enthusiasts but fuel economy is less than with the automatic.

With Mazda’s involvement, Scion has a winner in the iA sedan. How can you go wrong with a price of $17,000 with all its standard features? It’s fun-to-drive, handles great in city traffic, and gets good fuel mileage. The interior is up class for the segment and it comes with all the technology a new generation of buyer is looking for.

For a Scion of a different flavor, click here.

*Denis Flierl has invested nearly 30 years in the automotive industry in a variety of roles. Follow his work on Twitter: @CarReviewGuy