The 2016 Dodge Durango is a tweener. It’s not a car-like crossover, but it’s not a full-blown SUV either. It’s definitely not a minivan, but it comes with many attributes of one. It’s a three-row, multi-purpose vehicle designed for families needing a third row. It fits a growing family and their needs during the week.

It can also be driven on the weekend for more rugged use. The Durango has grown up and we were eager to see what sets it apart from the crowd. Over the weekend, we test drove the 2016 Dodge Durango Citadel AWD.

For 2016, there are a few changes. All 2016 Durango models get new wheel finishes, and the V6 engine gains a stop-start system. Monochromatic exterior appearance is standard on the 2016 Durango Citadel.

This Citadel tester came equipped with the Premium Entertainment Group ($2,490) that adds Beats audio and a rear entertainment system that includes two screens, and a DVD/Blu-ray player.

The Durango interior looks rich especially in the Citadel with its luxury leather seats. The black with light frost beige is an attractive interior color combination, sure to be a popular choice for many families. The Durango cabin features nice shapes and textures, and everything feels more substantial than the competition.

The cabin rates among the best in this class.

The driving position is higher, giving a commanding view from the driver’s seat. The driver’s seat comes with enough bolstering to keep you comfortably planted too.

There is seating for six with the optional captains chairs in the second row. They have a fold/tumble feature to greatly increase cargo space. The optional console between the chairs makes it more comfortable for second row passengers, but it does make it harder to get to the third row. Once back there, the third row seats split 50/50 and are more usable than in some other vehicles. It also folds almost flat into the floor for additional cargo carrying ability.

Behind the third row, we were able to easily load boxes and the power lift gate made it a snap. If you have a growing family, you will want the optional entertainment system with dual screens. The DVD/Blu-ray player is sure to keep the kids entertained on longer trips.

The 2016 Dodge Durango Citadel is powered by a 3.6-liter Pentastar V6, making 295 horsepower and 260 pound-feet of torque. It comes coupled to a sweet eight-speed automatic, sending power to all four wheels. A stylish rotary selector sits on the center console, which controls the transmission. Steering wheel paddle shifters allow the driver to manually shift gears as well.

An automatic stop-start system shuts down the engine when the vehicle stops in order to save fuel, although it was a little annoying for our tastes. This was really our only complaint. While it does improve fuel economy, it’s a little disconcerting sitting at a stop light wondering if the V6 will restart. We eventually got used to it, but it does take time.

EPA fuel economy estimates for the Durango’s V6 are 18/25 city/highway and 21 combined mpg with all-wheel drive.

As we clicked the doors open with the remote walking up to the Durango, the large, rear LED tail lamps lit up in red all across the back. You will be seen by anyone following you – no worries of getting rear-ended in this well lit vehicle! The Durango looks substantial on the outside and felt like it once we were underway on the road. It has the ride quality of a crossover yet offers the sturdy off-road ability of an SUV, especially with the optional all-wheel drive.

We were impressed with the V6 and its 295 horsepower. A V8 Hemi is available but the V6’s 260 pound-feet of torque has enough grunt to get the big vehicle moving quickly. We think the V6 Durango is quick and strong enough for most families.

It also gets a combined 21 mpg too, making it much more fuel efficient than the larger Hemi.

The cabin is quiet and refined, and we were comfortably cocooned from the noisy, outside world. Durango’s fully independent suspension delivers a firm, yet supple ride. Even with the Citadel’s large 20-inch wheels, the ride is comfortable across patchy, rough roads.

We put the all-wheel drive to the test during another late spring heavy snowstorm that hit the Rockies. The Durango powered through the 12 plus inches of heavy, wet snow without issue. We felt confident as the vehicle kept us moving up the snow-packed interstate as others were struggling to maintain traction.

The Dodge Durango Citadel stacks up well against rivals like the Ford Explorer, GMC Acadia, and Chevrolet Traverse. Families looking for a third row will want to put this vehicle on their list. If you can’t get yourself to plunk down money on a minivan, this is a good alternative.

It features a comfortable large cabin, lots of cargo carrying ability, and plenty of entertainment options. While the Hemi is available, we would recommend the V6 because of its ample power and improved fuel-economy. 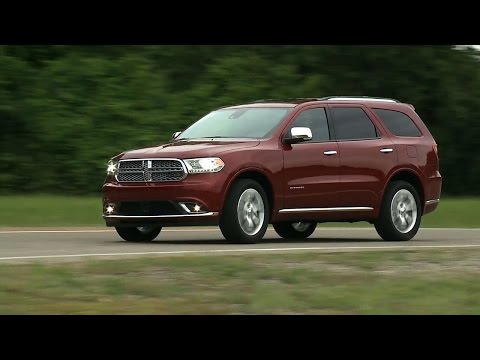