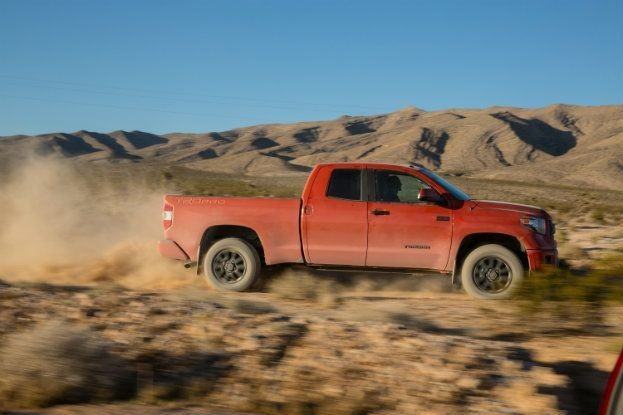 The Toyota Tundra TRD PRO is a rugged, good looking truck designed to compete with the Ford Raptor, and it’s even built in San Antonio, Texas. You may not ever take the TRD PRO racing, but you could just like Toyota did last year and win your class in the Baja 1000. After the race, Toyota turned around and drove it 1000 miles back to Ensenada, California where they started.

This truck is as rugged underneath as it looks on the outside. Everything is bigger in Texas and so is the 2015 Toyota Tundra TRD PRO Double Cab.

The 2015 Toyota Tundra gets the off-road TRD PRO trim level and will offer an integrated trailer brake controller. The TRD PRO gets a strong, black grille and air intake below the body-colored bumper, and a cool, thin horizontal air intake over the bumper.

Inside there are TRD floor mats and a shift knob, red stitching on uniquely colored seats, and touch-ups to the instrument panel.

The TRD PRO stands out from the rest of the Toyota Tundra lineup. The off-road truck rides higher because of the two-inch lift in the front springs. It’s also one inch taller at the roof. Our tester came with a new copper exterior paint called Inferno that received lots of looks. It also came with a few upgrades like paint protection film, bed mat, center console storage tray, and remote start.

This Toyota Tundra gets special seats with unique upholstery and red stitching. The backrest on the Tundra Double Cab rear seats recline and are comfortable for longer trips. The cushions fold up in a 60/40 split for tossing large cargo in back. If you need more room, check out the TRD PRO CrewMax, ideal for hauling your whole crew of hunting and fishing buddies.

TRD PRO is powered by a 5.7-liter V8 engine that produces 381 horsepower and 401 pound-feet of torque. It comes mated to a 6-speed automatic with sequential shift.
Fuel mileage estimates are 13/17 city/ highway mpg and 15 combined mpg.

The TRD PRO’s 5.7-liter comes with a dual cat-back exhaust with a deep-throated sound that we noticed the moment we got on the big V8. The torque matches the sound and gets this Toyota Tundra moving quickly from a standing start.

Toyota engineers developed this truck in the high desert of California and it’s designed for off-road use. We didn’t get a chance to do any serious stuff with the truck this week, but we did take it up Berthoud Pass at 12,000 feet elevation on our way to Grand Lake. On the dirt and gravel roads, the TRD PRO’s special suspension improved the ride over the harsh terrain.

Our lengthy time in the Double Cab left us impressed with ride quality over the road. It was comfortable on the 1 1/2 hour ride up the mountain pass. On the open road, power from the V8 engine is linear and strong with plenty of low-end torque.The 5.7-liter engine delivers 90 percent of its 401 pounds of torque from 2400 rpm to 5500 rpm.

It’s a solid powerplant that’s very responsive when quick acceleration was needed to pass slower traffic on I-70, while still being smooth and powerful when cruising at altitude in the Colorado mountains.

The TRD Off-Road Package delivers excellent pavement handling and isn’t too harsh for driving as an everyday commuter. Although this truck is long and will be difficult to maneuver in the city, especially if you try to find a parking spot. This Toyota Tundra comes standard with 375/65R18 Michelin tires that are a good compromise between off-highway traction and on-highway driving where they provide a quiet ride.

The new Toyota Tundra TRD PRO is built for the serious off-roader, recreation enthusiasts, or hunter who wants to get away from civilization.
It looks distinctively rugged on the outside but offers plenty of comfort on the inside for those extended trips into the high country.