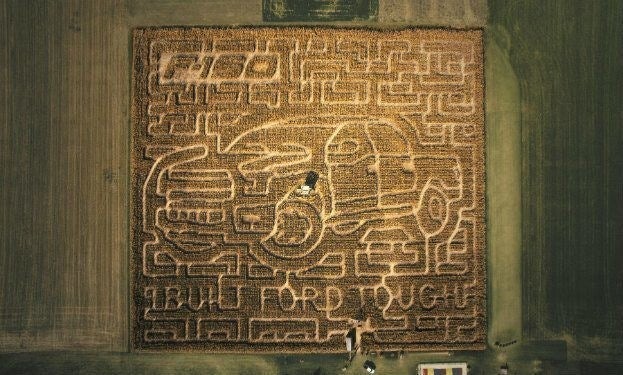 A few years ago, I went to a corn maze with some friends. We where given a trivia sheet and should we find all the answers inside, we would receive a prize pack of bratwursts, ribs, and hamburgers. I saw the very box. Enough meat to humble even the most committed carnivore.

How hard could it be?

Several hours later, as the orchard was closing up for the night, my buddies and I walked back to my truck. The lady who ran the corn maze felt sorry for us and gave us the “runner up” prize: a nice Dixie cup of cider. Its sweetness did little to raise our heads, now hung low in defeat.

I vowed never to return to a corn maze but now I am considering it again.

Leaders Farms in Napoleon, Ohio is a mere 100 miles from my Detroit home. They have entertained Midwest residents for 18 years with hayrides, barnyard golf, and a cannon named “Big Jack,” launching pumpkins nearly a half mile. The brave are invited to try ScreamAcers, where monsters of all types leap out in the middle of the night. Many have found themselves trapped in the “infested laboratory” as they wonder around aimlessly.

Although, if visitors to Leaders Farm this season know trucks, they might be able to find their way through the infamous corn maze. This year, it was inspired by the 2015 Ford F-150 and the seven-acre labyrinth is quite fitting for the Leaders; Ford owners their entire lives.

“We are a multi-generation Ford-driving family.  My husband, Brad, was reading a magazine last winter and saw the new F-150 design and loved it. We thought it would really stand out as the feature of this year’s corn maze.” ~ Kristin Leaders of Leaders Farms

The Leaders work throughout the entire year, planning, designing, and then growing the maze.

Given the special layout this season, GPS technology was utilized to imprint the 2015 Ford F-150 into the corn field. The giant Ford F-150 maze is expected to yield about 1,120 bushels of corn. Luckily, the new F-150 is 700 lbs. lighter for increased towing and payloads – they are going to need it! After the maze closes for the year, the corn will be harvested and fed to cattle raised on the property.

The Leaders will then start planning for 2016, although no word on what they will come up with next.

Despite the creatures that may jump out on a trip through ScreamAcers, the Leaders Farm is really not so scary.