Our favorite TV shows have us hooked, mind, body, and soul. When you find a TV series you love, it becomes all you talk about, all you think about, and all you look forward to. For some, we look forward to that one day in the week when we get to see our favorite character do what they do best, and there’s nothing more us gear heads love than seeing them do it in a great car.

Here are The Best Cars On Weekly Television.

The old-school show deserved an old-school classic; the 1965 Cadillac Coupe DeVille. Don Draper is seen driving a 390 horsepower, 6.4L  V8 version on the show but a 429 horsepower, 7.0L version was also available as an upgraded option.

A good car with good specs, this kicks off our Best Cars on TV list.

The funny and lovable leader of the Greendale Community College study group is always seen sporting a blacked out Lexus IS 300, 3.0L V6 in a ridiculous parking spot. Although it debuted late in the series, Walter White drove a Chrysler 300 SRT-8 after selling his signature Aztek for just $50. In the show, the 6.1 L Hemi Charger can be seen camping out of Eddie Velcoro’s high school or following up leads all around the city of Los Angeles. Of course Frank would be driving an Audi.

He’s done so in the past million transporter films.

In the series, he is mostly seen driving a black Audi A8 4.2L FSI Quattro before upgrading to the R8. Compared to the cars on this list, it’s not the fastest but definitely one of the best looking ones. Our favorite power agent has had a long list of brilliant rides but we mostly see him in the S550 throughout the series.

My personal favorite on this Best Cars list. A well-dressed “fixer” deserves a good-looking car.

Under his hood is a 4.7L twin-turbo V8 that fires up 402 horsepower to get Ray through his daily, uhm, client “visitations.” 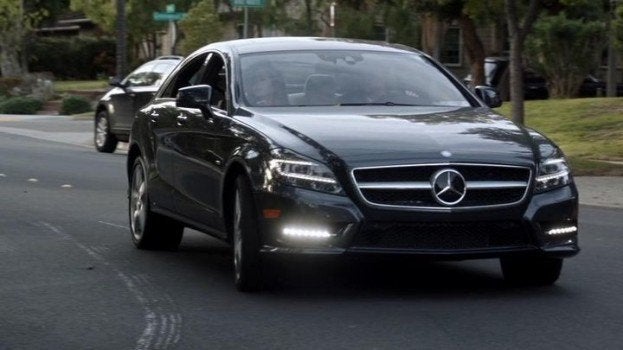 Although not the one he drives throughout the series, he retained this upgrade in season 5. The CEO of Pritchett Closets & Blinds is as angry as his car sounds. He drives a convertible SL65, with a 6L twin-turbocharged V12, that distinctly matches his personality.

And the best ride on the list goes to the local valley douchebag, Russ Hanneman. Russ is packing a 3.8L V8 that gets him from 0-60 in 3 seconds and his ego from 0-100 in just under a second.

What are your favorites and why?