Here it is Folks – the Tesla Model X!

We’ve known quite a lot about the upcoming electric luxury SUV, the Tesla Model X, for some time now. Well, mostly the fact that it was on its way and had Falcon-style doors. But last night, just outside of Tesla HQ in Fremont, California, Tesla big boss Elon Musk unveiled the Model X Steve Jobs-style and gave the first six customers the keys to their new machines.

So what does the Model X have in store for us?

Table of Contents show
The Specs
One of the Safest Vehicles on the Road
Bioweapon Defense Mode
What other cool stuff?
Interior
Availability and Price

First off, the Tesla Model X is a seven-passenger, all-electric SUV that has that similar sporty profile as the BMW X6 and Mercedes GLE-class, but at first glance seems to be a bit more practical.

In case you skimmed past that – the new Tesla Model X SUV is faster to 60 mph than a McLaren F1, or a Lamborghini Gallardo LP560-4 supercar. Now that’s impressive. 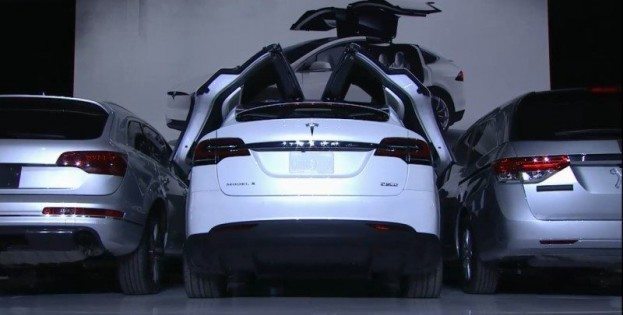 The “Falcon Wing” doors are meant for both style and function, allowing Model X owners to open their doors in super tight spaces. This was the original point of Lamborghini’s scissor doors but has been overdone for the sake of style for decades and lost the point after a while.

One of the Safest Vehicles on the Road

Just like Tesla’s Model S, the fact that it’s a completely new electric car (and not an electric drivetrain thrown into an existing car’s chassis) allows Tesla engineers to completely redesign how the car should be laid out. This allows things like a massively low center of gravity thanks to the battery packs, which helps with performance and makes it unlikely that the Model X will ever roll over – and if it does, according to Tesla reps, it’ll “land on its feet”. The X also has a huge front-impact crumple zone and greater strength all around. Remember when the Model S broke the machine that was testing its strength? Don’t be surprised if the Model X does the same. Musk expects the new SUV to get five stars in every category. 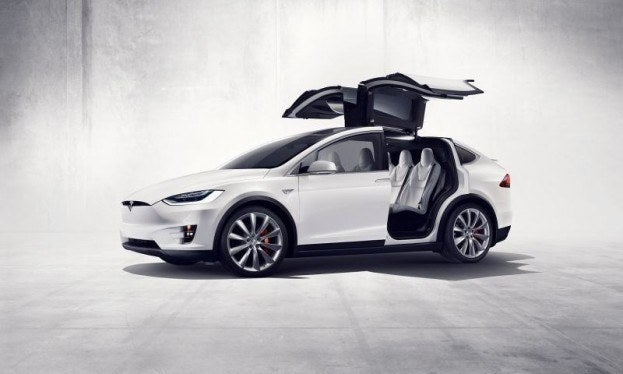 I imagine when Musk announced the Tesla Model X’s “bioweapon defense mode”, more than a few people chuckled, thinking the comparison of Musk to Tony Stark has gotten to his head. But this thing is for real:

“If there’s ever a bioweapon attack, the safest place is your car. There’s actually a ‘bioweapon defense mode’ right there in the HVAC. We figure you shouldn’t have to think if you’re in an emergency.”

What other cool stuff?

Plenty. The car has an “invisible butler” that doesn’t just unlock the door as you approach it, but opens and closes the door for you so all you have to do is climb in and push a button. The doors also have embedded radar sensors to ensure they don’t hit anything (or anybody) as they open and close.

And for the SUV-y kind of stuff, the Tesla reps say it’s “great offroad” with 5 ride heights with the max ground clearance of around 9.5 inches.

It can tow up to 5,000 lbs thanks to the electric drivetrain’s massive torque. Roof racks are available but actually discouraged, as they obviously has an aerodynamic disadvantage that will reduce range.

Reports from the event say legroom is plenty even in the back, although with seven people in the car, cargo room is expectedly tight. And the back seats aren’t for tall people.

Just like the S, the Model X will have over-the-air updates allowing upgrades and additions to the car at any time Tesla engineers decide – expect things like more efficiency and range without having to actually do anything at all. The X can use the same 30 minute quick charge system at Tesla’s Supercharger Network. In fact, it uses the exact same battery as the S.

Everything I’ve read about the Tesla Model X from the event suggest that just like the Model S, the X is incredibly pleasant inside, with an amazing 560 watt, 17-speaker sound system, a windscreen that takes the word “panoramic” to a new level (the largest windscreen ever installed in a production vehicle), an incredibly smooth and quiet ride, and a dashboard that puts the Millennium Falcon to shame.

Seating can be has with two arrangements – 6 or 7 seats. Removing that single seat (second row middle seat) allows for more room for cargo and maneuvering. Either way, the seats have a “monopost” design – similar to high-end office chairs, to give even more versatility.

The first six lucky owners given their cars at this event get the “Founder Series” Model Xs, which is a similar kind of idea to a crowdfunding campaign. If you want to buy a Model X, though, they come in two variations. The highest performance version – the P90D, is the one we’ve been quoting performance numbers on above (with ludicrous mode which is optional, otherwise 0-60 is a still-fast 3.8 sec) and starts at $143,000. The P90, which decreases performance to 4.8 seconds for 0-60 mph, starts in the $130,000s and is still stupid fast, it just has a weaker rear motor. It also gets a few more miles of range, but nothing major. Here is a quick comparison: 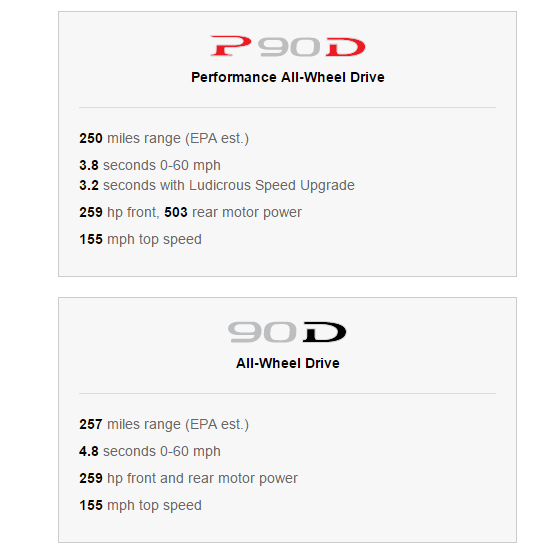 After the announcement on price and a bit of inevitable backlash, Mr. Musk said the following on his Twitter page:

So expect lower cost versions of the Model X soon.

Either way, expect a lengthy wait of “8 to 12 months” if you order one now. Worth the wait? We’ll have to see, but in my eyes, Tesla just made the luxury SUV market cool in the same way they made the luxury sedan cool.

Check out more details on the official Tesla Model X page and let us know what you think of the Model X in the comments below.