Henry Ford said a customer can have a car painted any color as long as it’s black. The Dodge brothers, who worked with Ford and owned stock in the company, didn’t hold to this theory of only black cars. After their partnership with Ford ended, the brothers began planning production of their own Dodge automobile and established Dodge Brothers Motor Car Company.

Dodge will let you customize your Charger SXT to set it apart from all the others – or if you want a color other than black. You can max-out this four-door sedan with extras like special wheels, additional safety features, all-wheel-drive, connectivity technology, and various luxury features.

The 2015 Dodge Charger is heavily updated inside and out. An eight-speed automatic transmission is now standard. The new Dodge Charger adopts a host of electronic driver aids and safety features, including a frontal collision warning and mitigation system.

LED interior lighting and an auto-dimming rearview mirror were included.

The Pitch Black exterior of this Charger is beautiful, but the black and white leather contrasting interior with gold stitching is gorgeous. The dash trim, gauges, and center console have a unique subtle honeycomb effect you can see in the sunlight.

The front seats offer plenty of side bolstering for spirited driving and are supportive but we felt they were a bit on the firm side. The Dodge Charger is a full-size sedan and offers a very usable back seat.

The attractive color scheme goes to the heated back seats that offer an average amount of legroom for adults. The sloped roof, however, can make headroom tight for tall people. There’s a handy folding center console with storage and cupholders for longer trips but we felt there was limited rear visibility due to the small side windows and raked rear glass.

The 2015 Dodge Charger SXT comes with a 3.6-liter V6 engine that produces 292 horsepower and 260 pound-feet of torque. This tester had the Rallye Group and modest tuning tweaks boosted output to 300hp and 264 lb-ft of torque. As on all 2015 Chargers, an eight-speed automatic transmission is standard. Rear-wheel drive is also standard, but this SXT came equipped with optional all-wheel drive.

Fuel mileage for the AWD model is an EPA estimated 18/27 city/highway mpg and 21 combined.

After driving the Toyota Camry last week, we immediately noticed the Charger is a big, heavy sedan. That’s a good thing for ride quality and makes the sedan comfortable, stable, and smooth on the highway. The Charger gives the driver confidence as it feels very solid and quiet on the open road.

When we pushed hard on the gas, the V6 gave a healthy enough growl as the 300 horses came alive under the black hood. The engine connects well with the 8-speed automatic and has enough power for all driving situations. 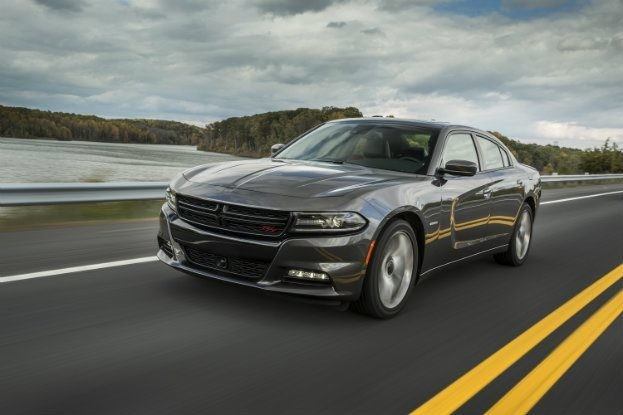 The Charger SXT handled the curves well for a big sedan as we tossed it around the tight mountain corners. We did experience some body roll, as you would expect, with a full-size sedan. The AWD is seamless in the Charger V6 and runs as rear-drive unless needed, to improve highway economy.

We hit the gas from a stop where there was some gravel and broke the rear tires loose. The front wheels will only be engaged if they begin to slip.

We used the steering wheel paddle shifters which dials up driver engagement and proves that driving a family sedan doesn’t have to be boring.

The steering feels sporty and precise. Ride quality was supple and forgiving on rutted, dirt roads.

The 2015 Dodge Charger SXT Rallye AWD offers a good mix of sport and power with the 300hp V6. The Charger is a good choice for families that need more room than a mid-size sedan.

It’s a balanced performer with plenty of features and options.