Trucks get the attention when it comes to the job site.  As champions of work, they are often given the title – and rightfully so – but perhaps another type of vehicle deserves those accolades too?

While the Ford F-150 continues it’s longstanding work ready reputation, it’s commercial van cousin is racking up sales. Through the first half of this year, commercial van registrations as monitored by Ford and ISH indicate the blue oval is the fastest growing manufacturer of this segment in the United States.

Commercial vans are stepping up to the plate and frankly, knocking it out of the park.

The Ford Transit went on sale last year and provides over 58 different configurations.  A dual sliding door option has been introduced for 2016 for easier access to cargo, equipment, and other payloads.  Ford Transits have been fitted into passenger shuttles, emergency response units, food catering trucks, and even mobile dog grooming.

“Transit customers appreciate the van’s flexibility because it can enable them to right-size their vehicle to the needs of their vocation.  There are 12 ship-through upfitters located within 30 miles of Kansas City Assembly Plant, making it easy and fast for customers to design their Transit vans to serve their business requirements.” ~ Yaro Hetman, Ford Brand Manager – Transit, Transit Connect, and E-Series. With the success of the Transit, Ford has captured 56 percent of the U.S. commercial van market as of June 2015.

That’s up 48 percent from June 2014, according to IHS new commercial vehicle registration data.  Commercial van sales overall increased in accordance with the U.S. economy, although Ford sustained 80 percent of that growth in the segment, during the first half of the year, according to their analysis of IHS data.

Ford vans are top sellers in 47 states, according to the automaker’s continued examination of IHS data. Those 47 states also represent 99.09% of the U.S. population.

In 2009, Ford introduced a smaller commercial van, now the best seller in its segment with a 69 percent market share.

The Transit replaced the E-Series, which first went on sale in 1961 as the Ford Econoline.  It stood as the segment’s top seller for 35 years but the Transit has filled the shoes well.  For the 2015 model year alone, more than 100,000 Transit vans, wagons, cutaways, and chassis cabs were built at the Kansas City Assembly Plant.

Granted, these vans are classified by Ford as trucks and listed on their website accordingly.  However, they don’t look like or fit the typical description of a truck.

Vans like this are a select market too – we probably won’t see a Super Bowl commercial touting the benefits of these vehicles on the job site like we might the new F-150.

However, they are just as deserving of the merit we would ascribe to any vehicle we depend on to get the job done. 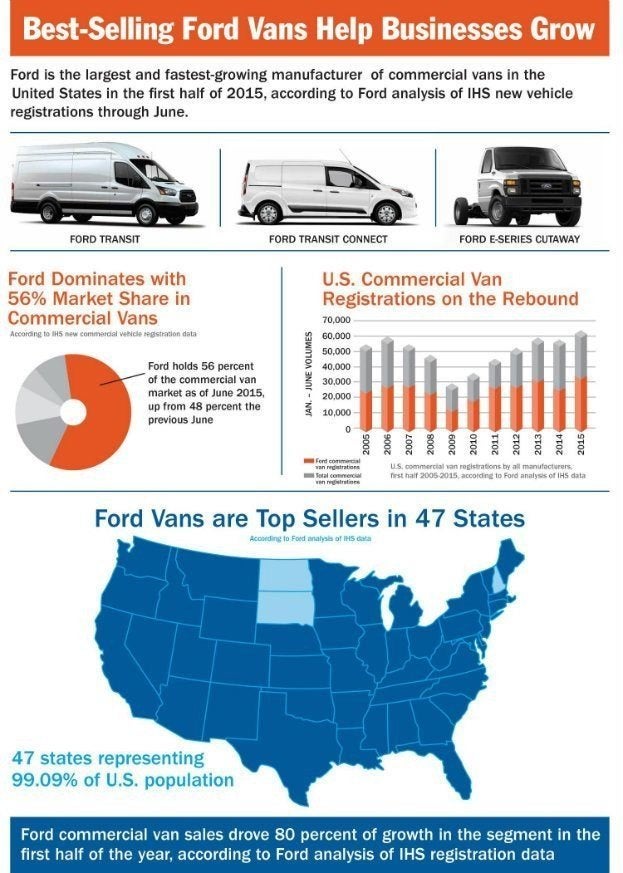