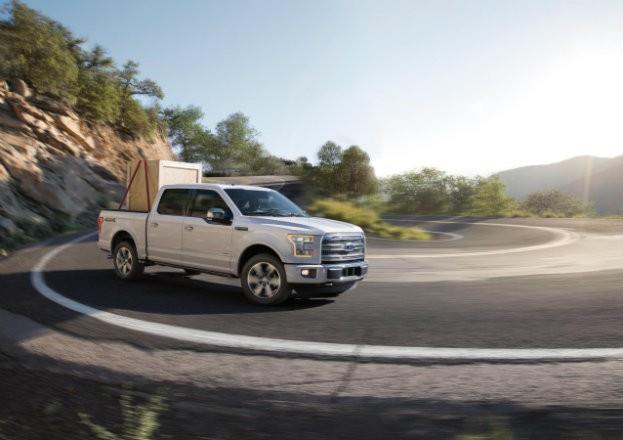 The 2015 Ford F-150 resembles the Mustang.  Seems unlikely, perhaps even impossible, yet the two are “linked” not so inexplicably, although wonderfully.

The transmission technology for the Mustang and F-150 were created in unison and that becomes strikingly obvious when the best selling truck enters Sport Mode.

Sport Mode allows F-150 to mirror the performance of the Mustang, especially as it matches engine RPMs during a downshift in anticipation for a tight corner. The electronics calibration for such a feature comes directly from the infamous pony car. The 2015 Ford F-150 received a complete re-design with a plethora of changes – none as arguably prominent as the aluminum body.  The weight savings enhances all aspects of performance for the F-150, especially with the six-speed automatic transmission.

The 2015 Ford F-150 and Mustang were developed on similar schedules.  As a result, power-train engineers often drove both on durability testing trips.

It was only a matter of time before the responsive transmission of the Mustang met the benefits of an aluminum body.

“Our team realized how well the new F-150 handled and responded to acceleration due to its reduced weight.” ~  Karl Jungbluth, Ford Transmission Calibration Engineer.

Sport Mode changes shift frequency, allowing F-150 to hold lower gears longer.  There is less shifting for a more enjoyable and thrilling ride through sweeping roads and dusty trials. Straight line acceleration is quicker and quite noticeable when doing two back to back runs – one in normal and the other in sport mode.

“Sport Mode keeps the engine operating in the desired power and torque ranges, or what we like to call the ‘sweet’ spot.  “It makes Mustang come alive and we feel it does the same thing in F-150.  We decided we could adapt the Sport Mode capabilities of the six-speed automatic transmission from Mustang to F-150 to enhance the overall driving experience for truck customers.” ~ Karl Jungbluth

Tow/Haul Mode also enhances the F-150’s driving dynamics.  Like Sport Mode, the shift points are changed through Tow/Haul Mode to better accommodate the driver when hitched to a trailer.

Under acceleration, the truck holds higher RPMs, further up the power range. Upshifts are limited when climbing a hill but when cresting it, engine braking is then enacted to help maintain a healthy, safe speed.

Push Tow/Haul twice.  An amber S shows in the lower-right portion of the tachometer.

Hold on and enjoy!