Around The World In 15 Taxis

When somebody says “taxi” I think New York City but there is some disagreement on who actually owns the title of the first taxi.

One claim is the Reimenwagen, produced by German industrialist Gottlieb Daimler, put into public use in 1897.  However, around the same time, Walter C. Bersey’s fleet was active through London and in New York, Samuel’s Electric Carriage and Wagon Company was offering their services.

Original taxis did not have meters and fare disputes between driver and passenger could arise.  Early taxis were not always efficient either.

Bersey’s London taxis were called “hummingbirds” from the excessive hum like noise they made.

Taxis today have built in meters, TV screens, and a host of other advertisements decorating the vehicle.  Taxis have become more fuel efficient but in certain nations, they may not be motorized.

These graphics are provided by The Taxi Centre and will serve well should you travel the world. 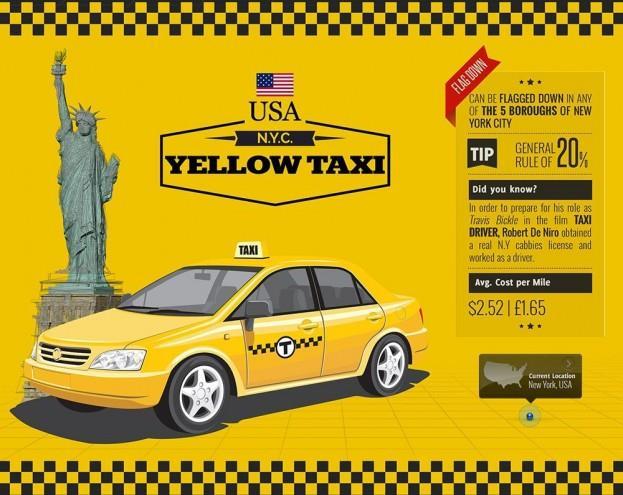 On a recent visit to New York City, Danielle and I flagged down a taxi in order to get to Central Park and then to dinner.  Both our drivers raced in and out of traffic – it was not so much scary as it was amazing.

I felt like I was on a ride at an amusement park.

Danielle discouraged me from acting like Tom Cruise in Collateral during our rides. 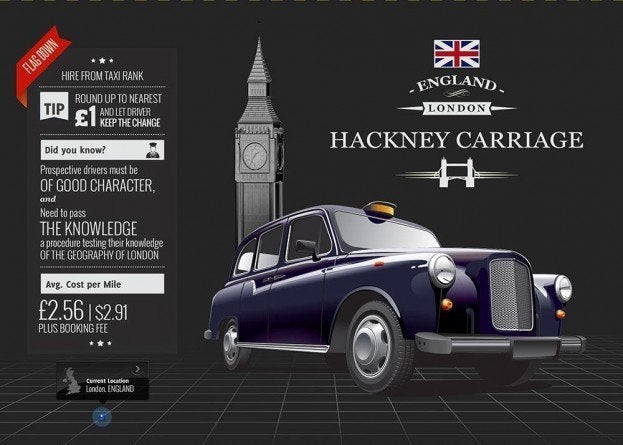 In London and Paris, horse and carriage taxi services began in the 17th century. These were the first Hackney Carriages, deriving from the French “haquenée,” a small to medium-sized horse.

It’s also the name of a London borough.

Taxi services in the 17th century operated in a surprisingly similar manner to today, where passengers could choose their destination after being picked up at the inn.

World travelers say the London taxi service is the most efficient, praising low fares and ease of flagging one down.

One morning, I was walking down the street, at sunrise, and the Queen of England pulled up in a Hackney Carriage. 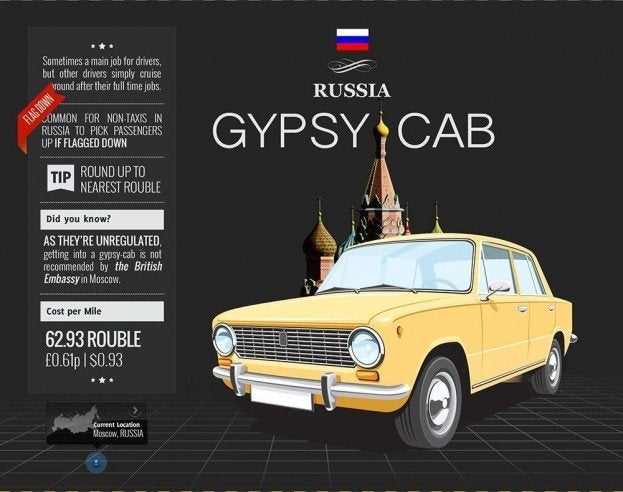 Russia has a huge unlicensed taxi trade, with many people working as drivers for a second gig, after their full time jobs.

In Moscow, almost any person can be considered a taxi driver.  It’s common for civilians to offer lifts on an individual basis when hailed, agreeing to a price on the spot.

When on break from Street Fighter tournaments, Zangief moonlights as a gypsy cab driver. According to Mexperience, taxi fares in Mexico are less expensive than other nations but more than Mexico’s public transit system.  Taxi related crimes, including robbery have happened in Mexico City, so it is not recommend to flag one down after dark.

Traveling in pairs, during the day is safest.  If you cannot speak Spanish, have a map to show a driver exactly where you need to go. “Copacabana!  And step on it!” 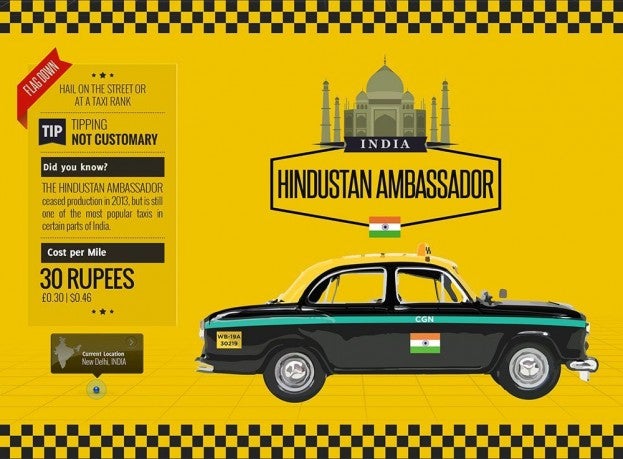 In Delhi, Compressed Natural Gas is the fuel of choice for the city’s taxi fleet.

With a swelling population over 16 million, the use of CNG cuts pollution drastically. 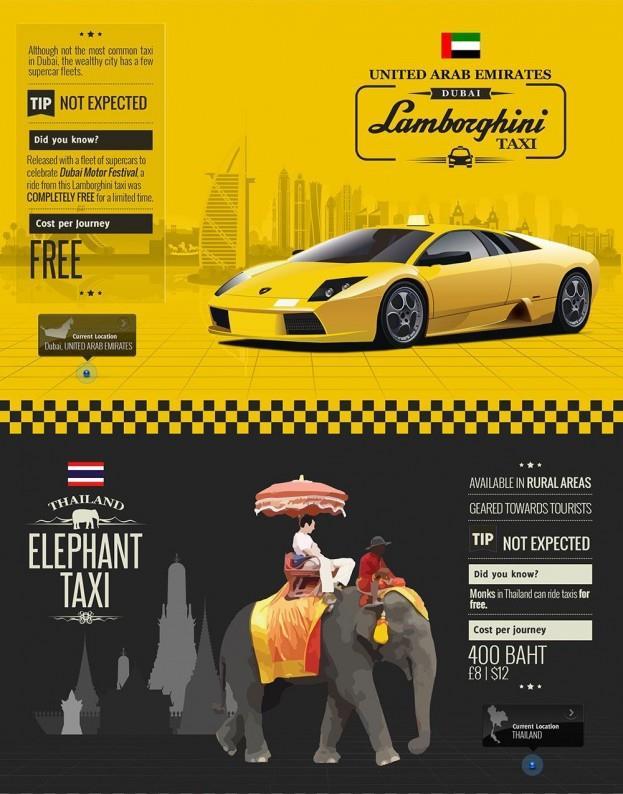 Quite a difference between The United Arab Emirates and Thailand, from exotic cars to elephants.

Thailand probably has the most original, unique (and strongest) taxi in the world.

These are often geared towards tourists who have never ridden on a Saharan camel or an elephant.

Many animal taxis are multi-purpose, with the animal performing daytime agricultural duties, then hired out on a nightly, case by case basis. In China, taxis can be procured for up to a whole day, as long as the price is agreed on ahead of time.

Due to heavy traffic in China, taxis often park in a particular standing zone so it is recommend to hail one there.

It is also recommend to grab a receipt. 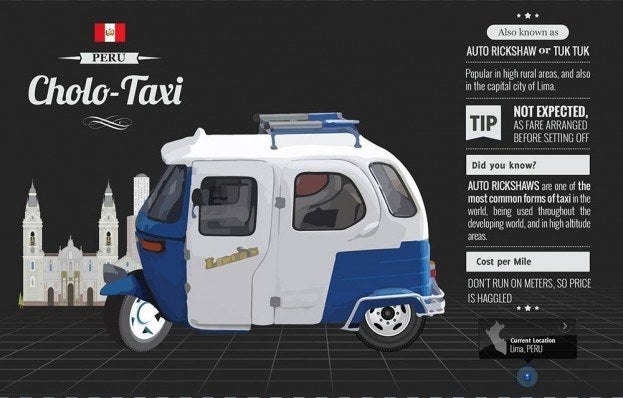 If you have a background in sales, negotiating the price of a ride in Peru might not be a problem. For others without that strength, world travelers suggest leaving when a fare feels uncomfortable.

That may prompt an immediate reduction in price.

It is also recommended, in order to get the best fare, actually seeing the vehicle and be skeptical of taxis that approach you.  They oftentimes present a higher than the normal figure. In Haiti, taxi cabs are recommend over rental cars for cost and infrastructure reasons.

Taxi sharing is common for both nations, having separate public transportation categories for it. When I see the water taxi, I automatically think Indiana Jones and the Last Crusade.

Water taxis are regulated for safety and undergo routine inspections.  Fire extinguishers and life jackets are also on board.

Trans Maldivian Airways has quite the history, along with some beautiful planes that no doubt offer stunning views of the Indian Ocean and Arabian Sea.

From planes and cars, to animals and boats, I imagine a taxi driver leads an interesting life.

Even though cultural norms are different regarding taxis, think of the people you would meet and all the stories you would have.  If you know your city well, then you will serve as a unique ambassador to your passengers, be it driving or flying them.