If the Volkswagen Golf were a person, who would it most likely be? The 2015 Volkswagen Golf TSI SE would be like the girl next door that you really don’t pay much attention to. She is pretty – not a knock out – but every guy wants to take her out.

She is fun to be around and when you really get to know her, she is a party animal!

The 2015 Volkswagen Golf TSI SE could be the sleeper vehicle of the year. It will fly under most people’s radar and never be discovered for what a good vehicle VW has in the stable.

There have been changes on the outside that aren’t easily identifiable: a front end that is slightly lower and wider, along with a shorter front overhang. It also gets new narrower headlights.

Underneath is where most of the changes occurred.

Golf gets VW’s new MQB platform that is two inches longer, an inch lower, and slightly wider. It now rides on a two inch longer wheelbase as well. 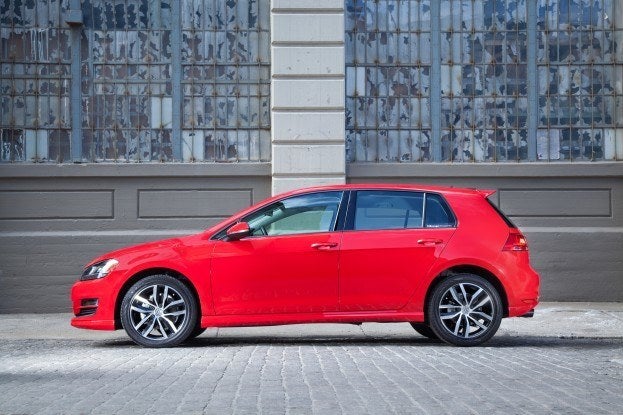 Volkswagen interiors have always been simple but tastefully done. The 2015 Volkswagen Golf SE exudes that same simple sophistication. It’s a nice change from the high-tech luxury vehicles to be able to easily change the radio station and find the needed setting for the A/C, without getting out the owners manual.

The Golf’s front seats are comfortable and even though this is a compact car, it has enough room for the tallest drivers. The back seat is big for a small vehicle and the riders we took to lunch thought it had good legroom.

For those looking to carry cargo, the Golf SE measures 22.8 cubic feet of cargo carrying ability, and the Golf’s boxier shape allows stuff to be stacked nearly all the way to the roof.

Most buyers in this segment will be millennials who like their music on the louder side and this sound system delivers. The 8-speaker, plus sub-woofer, premium audio system that comes on Golf SE is made by Fender, of guitar fame.

The louder you crank it, the better it sounds! 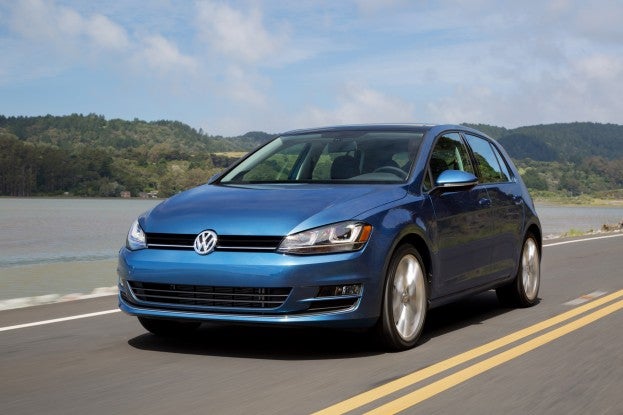 The 2015 Volkswagen Golf TSI is powered by a 1.8-liter turbocharged, direct-injected inline-4 that produces 170 horsepower and 200 pound-feet of torque.

We took the Volkswagen Golf SE on a trip up I-70, into the Rocky Mountains for a good test. We found the Golf to be like the neighbor next door – we weren’t expecting anything spectacular, but came away thoroughly impressed.

We found this compact car to be sporty, fuel-stingy, and high on the fun-to-drive meter. Outward visibility is excellent on the highway, good for zipping through city traffic. Even at altitude, the 1.8-liter engine had ample power for tooling up the mountain pass. We got through the Eisenhower tunnel and made our way to Frisco where we stopped for lunch. On the way back, we decided to take a different route, going along the twisting road between Frisco and Breckenridge.

The tight curves gave us a good idea of why this new Golf is highly touted.

The turbocharged four-cylinder pulled us up and through the high-altitude corners with little issue. The 6-speed automatic is smooth and the shifts were timely. There is a brief moment of hesitation when pushed hard, but it’s quickly followed by ample thrust.

We put the transmission into Sport Mode and the gearbox held gears longer for the spirited driving up the two lane mountain road.  We got excellent fuel mileage too and the gas gauge hardly seemed to move.

The ride is firmly sprung, which is ideal for quick maneuvers in and out of traffic.  Over a stretch of rougher road, the rear independent suspension helped keep things relatively smooth.

Like the girl next door, there’s a lot more to the Golf TSI than meets the eye. We found the 2015 Volkswagen Golf TSI SE very fun to drive, with a ride that’s firm but comfortable.

The interior is simple yet sophisticated and convenient. The technology inside is easy operate.

The Volkswagen Golf is a versatile hatch that’s very high on the fun-to-drive meter. The Golf TSI achieves excellent fuel economy and has enough cargo space for active lifestyles.