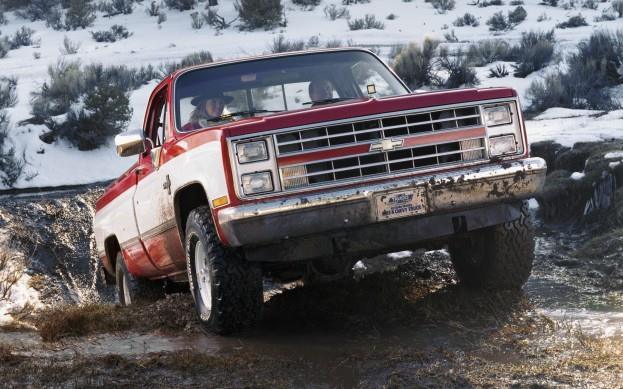 I remember when my father brought home his 1987 Chevrolet Silverado 10.  I was a kid and everything about it was so incredible.  The radio had sleek, sliver dials and the climate controls were on a slider tab.

I remember asking, upon moving them, what the “bi-level” label meant.

The black dash glistened in the sun, while the orange on the speedometer needles glared.  And when she would fire, the 305 V8 had such a purr.

It wasn’t a truck – it was the truck.  Of all the vehicles a kid could admire – and many I did – none where as profound as my father’s 1987 Chevrolet Silverado 10.

All across the industry today, there are movements towards smaller displacement, turbo charging and the use of lighter weight materials.

We don’t give up fuel economy in the interest of power nor do we give up safety when using lighter materials.  As an entire industry, we are more balanced because we are getting better at engineering, designing and manufacturing automobiles.

We have truly advanced since my father’s 1987 Chevrolet Silverado 10. Imagine where we will be in the next 10 years?

I recently spoke with Rebecca White, Engineering Communications Manager of General Motors.  When new automotive technologies surface, incorporating them into manufacturing and making them beneficial and practical for the customer becomes paramount.

And a new generation of automotive professionals will ensure such things come to fruition.

“These are jobs that will enable General Motors to continue to innovate and evolve our products to meet the changing needs of our customers and keep them at the center of everything we do,” White said.

According to General Motors, here will be the Top Ten automotive jobs by 2025: Autonomous Driving Engineers – General Motors is developing vehicle-to-vehicle communication on the 2017 Cadillac CTS that will allow it to “talk” to others equipped with the same technology.  Super Cruise is on deck for Cadillac too, a semi-autonomous driving advancement that will no doubt be expanded on.

These engineers will give our next vehicle sharper “eyes” through which autonomous driving can be made possible.

Automoblog recently contributed to a panel on autonomous driving by Part Catalog.

Electrical Engineers – Electric and battery powered automobiles are not a one-off concept and further development will increase their viability.  Over the next 10 years, it will be a top priority for electrical engineers to explore ways of making these types vehicles more efficient in terms of range and power.

Alternative Propulsion Engineer – Getting the wheels to turn on the future automobile might get very interesting as demands increase.

“We develop vehicles for our customers around the globe who have various needs and wants when it comes to the way in which their vehicle moves,” White explained.

While battery and electric vehicles might be easier to visualize, White reveals propulsion is on the table at General Motors.

“We will continue to innovate in the areas of diesels, battery electrics, fuel cells and we will need the right talent to keep pushing forward in the area of propulsion too,” she said.

3D Printing Engineer – A mockup printing used to take weeks but now, only hours.  3D printing is instrumental in the development and creation of our next automobile, especially as the art of it becomes more intricate.

These types of 3D printings allow GM the ability to better see what they are testing before mass production.

“This helps make the development process more efficient overall,” White said.  “We will need engineers who are well versed in this area to find new uses for 3D printing as that technology develops.” Interaction Designers – Digital screens are now more common, controlling all the marquee features from climate and media to ambient lighting.

Interaction Designers are needed so a customer can access the key elements of their vehicle without compromising their safety.

Web Programmers – Connectivity now ranks with fuel economy and horsepower.  Such accessibility is important for the next generation car owner and Web Programmers will create the software platforms that make it possible.

“The auto industry is changing in terms of the level of connectivity and we’re seeing that integrated into cars and trucks,” White said.

Analytic Experts – Algorithms bring car and customer closer, making it easier for the automobile to communicate everything to the driver, from navigation routes to possible service problems.

As automobiles become more advanced, the communication to the driver must be even more streamlined.

“Vehicles are more integrated into people’s daily lives and there are some exciting areas in which to work,” White explained.  “These are areas that weren’t even thought of a few years ago but we are now in need of qualified engineers, statisticians, data analysts, and software developers.“

As these fields expand it could make Detroit a future, technological hub.

“Hopefully we will be attracting the types of candidates that may have historically only been interested in Silicon Valley jobs,” White said. Industrial Engineer – Vehicles are mass-produced and done so quite efficiently but there are always ways to enhance.  Industrial Engineers will develop new protocols in manufacturing so future advancements go from imagination to integration.

Customer Care Experts – The farther we advance in the automotive industry, the greater need to humanize the machines.  These customer care experts range from Sales Consultants to Service Advisors and will ultimately be responsible for explaining, demonstrating and fixing the new technologies emerging in the next decade. For as long as I can remember, the only thing I ever wanted to be when I “grew up” was a car guy.  I am blessed as I now live in Detroit and make a living as an advocate for our great city and its most iconic industry.

Looking at these new trends, as promising as they are, I am reminded of the old saying:

“the more things change the more they stay the same.”

Yes, the automotive industry is evolving and will continue doing so.  There are all kinds of new, cool technological features that make today’s vehicles almost unrecognizable from their counterparts of yesterday.

Yet, I still recall cruising with my father in his 1987 Chevrolet Silverado 10 and listening to Def Leppard on the radio.

We would drive through downtown of the small Iowa community I grew up in.

With the windows down, rock music blaring and bowtie logo shining on the hood, we got some looks.

You can do the same thing with a 2015 Chevy Silverado.

Let the advancements in terms of safety, performance, infotainment and fuel efficiency come and change for the better.  Let such demand create automotive jobs that will, in turn, breathe life into one of the most prolific cities in the United States – my home of Detroit, Michigan.

Let’s keep the memories the same, however . . . especially the ones with our father’s old pickups.