It’s a little more functional but still rates high on the fun to drive meter. That’s what MINI has introduced for the 2015 model year and we took it for a drive over the weekend.

The 2015 MINI Cooper S Hardtop 4 Door was interesting to us.  We really wanted to see how four doors for the car could make a difference in utility.

The 2015 Mini Cooper hatchback is available as both the traditional two-door as well as a new four-door model. All 2015 Mini Cooper models come standard with heated mirrors and automatic climate control. The Cooper S hatchback gets a more powerful engine with a hood scoop, a black mesh grille, dual center-mounted exhaust tips, a “torque-vectoring” electronic limited-slip differential underneath and LED fog lights up front.

The newly introduced 2015 MINI Cooper S four-door hatchback is only 6.3 inches longer than the two-door, so you won’t use it to haul your friends around town. We had to leave it at the office Saturday and take one of the pickups to lunch because there was no way two big guys could squeeze in the back.

They did, however, comment on the Electric Blue exterior paint as we walked by and said it was nothing like they’d ever seen before.

The MINI Cooper S four-door comes with the familiar sport seats and were heated in this tester. They offered plenty of lateral support for our more spirited driving. Up front the cabin feels bigger than expected and is a comfortable place for driver and passenger.

The new four door MINI Cooper gets 40.7 cubic feet of cargo carrying ability, which is a little more than the two door.

We found the rear doors made it much handier as we loaded a few small boxes into the Cooper S this weekend.

It’s much more convenient than folding the seat forward in the two door and wrenching your back trying to squeeze things in. The rear hatch offers even more cargo carrying capacity for small items – like a trip to the grocery store.

For parents, backpacks and school items will fit nicely for the kids. 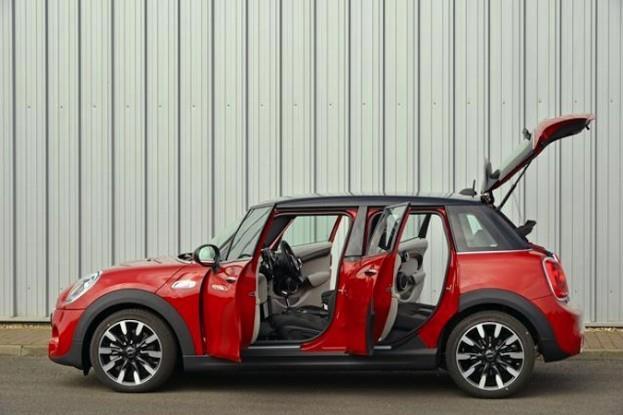 The MINI Cooper S hatchback packs a turbocharged 2.0-liter four-cylinder engine that produces 189 hp and 207 lb-ft of torque. It also offers a choice of a six-speed manual or a six-speed sport automatic featuring steering-wheel-mounted paddle shifters.

Mini Cooper S is quick and can sprint from 0-60 mph in 6.4 seconds with the automatic we had in this tester.

We did not have the opportunity to test acceleration on the manual.

Fuel economy is 26/33 city/highway with the automatic and 29 mpg combined.

We started the MINI by pushing a toggle switch in the middle of the climate control knobs which is unique. The new MINI Cooper S four-door hatchback is only 6.3 inches longer than the two-door, so we were able to fit the small compact into some tight parking spots at the mall this past weekend.

If you need a vehicle that is easily maneuverable, this is the best in the segment.

We found the new MINI Cooper S four door pegs the fun-to-drive meter just like the two-door we tested.

If you like to drive, the MINI is the car for driving enthusiasts. We had fun over the weekend, darting through slower traffic on the highway and navigating tight spots in the streets of downtown Denver. The S is especially responsive to driver inputs and was even more fun to push hard through the tight mountain curves near Evergreen over the weekend.

The TwinPower turbo 2.0-liter’s 189 hp doesn’t sound like much, but in the MINI’s 2605 lb. frame, it has all the power needed to provide more fun than any other compact car on the planet.

The MINI Cooper S has Go-Kart like handling because of the 2.0-liter turbo engine and sport-tuned suspension while large front brakes provide extra stopping power.

The suspension in the S is designed for maximum driving dynamics and is stiffer than the standard model. This translates, naturally, to a stiffer ride which some people may not like.

The Hardtop’s new Sport automatic transmission is impressive and is definitely worth the extra $1,500.

It is especially responsive to driver inputs when in Manual mode and using the paddle shifters.

While driving the MINI 4 Door, we realized the upside to this small sports car is the size.

We were able to maneuver in and out of traffic on the highway with room to squeeze the small compact car anywhere we wanted.

Yet, the downside is also its size.

We were next to an 18 wheeler on the highway and the driver couldn’t see us in his mirror. As he switched lanes, we were able to quickly exit the lane and get over to avoid a collision.

It’s best to stay far enough behind a large truck or use the turbo charged engine to quickly pass them. It also passes on the freeway with ease.

The MINI is designed for driving enthusiasts who want a compact car for commuting that’s more enjoyable to drive. The new MINI 4 Door offers a bit more cargo carrying ability and the rear doors make it easier to load.

The base model is affordable – if you add options they can push the price up quickly but part of the fun is making your own MINI.

Photos: MINI USA
The rating scale of Automoblog.net is based 1 through 5, with 5 being the best.