The Toyota Corolla started as a tiny, boxy compact back in 1966 and has grown into one of the world’s most successful cars.  To date, Toyota has sold 40 million Corollas worldwide. Corolla has never been about flash – more about being reliable and dependable.

The 2015 Corolla follows that same pattern and is still an affordable commuter.

This week we have been driving the 2015 Toyota Corolla S Premium model, a very capable, small sedan.

And that’s a bit more fun to drive than the standard Corolla.

Following a full redesign last year, the 2015 Toyota Corolla adds a fold-down rear center armrest to all trim levels, except the base L. The Premium trim also received the Driver Convenience package as standard. 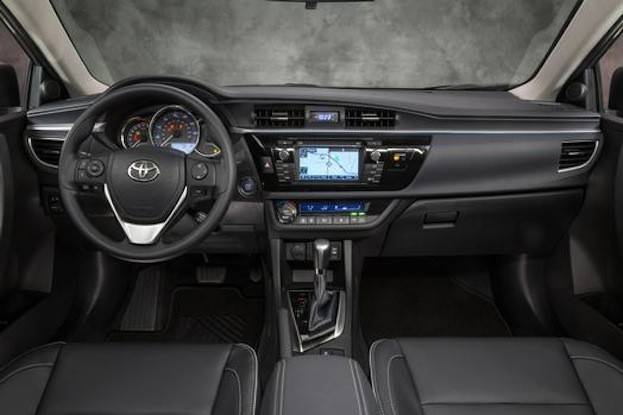 We were impressed with the Corolla S interior as it comes with plenty of extra features: eight-way heated, power seats, backup camera with useful tracking guides and push button start.

The materials and switchgear are of high quality, with soft-touch controls and coverings applied throughout the cabin. Last year’s redesign increased the overall length of the Corolla which allows a considerable, positive difference in cabin space.  And a genuinely impressive increase in rear seat legroom.

One of Corolla’s strong suits are the seats. The sport front seats are superb, with firm, well-fitted side bolsters and proper lumbar support. The seats kept us firmly planted during some more spirited driving through the mountain curves.

The Softex upgrade upholstery is attractive and the mixed-media combination of Sport seats in the Corolla S are particularly good looking for a compact car.

The 2015 Toyota Corolla S is powered by a 1.8-liter four-cylinder engine that produces 132 horsepower and 128 pound-feet of torque.

The Continuously Variable Transmission (CVT) gets an EPA estimated 29/37 city/highway with 32 mpg combined.

While the Corolla S is the sportier model in the lineup, it’s not a sports sedan. Although, it does have an engaging nature and particular dynamics that keep the driver connected to the car.  For example, ride and handling are superior for a compact car in this segment.

The Corolla’s 1.8-liter, 132-hp four-cylinder is an efficient, smooth and competent powerplant and gives adequate performance in all driving situations.

The Corolla S’s CVT automatic transmission with Sport Mode and steering wheel paddle shifters is what sets the S apart from the other models. The CVT offers seven ratios, though by definition, a continuously variable transmission contains no gears.

Toyota engineers were able to mimic the effects of selecting a lower gear when downshifting manually.

We experienced this when driving at 70 mph in seventh gear. When we downshifted with the paddle shifters to sixth gear, the engine’s rpm immediately rose to 3000 rpm. With each successive downshift, RPMs were raised another 1000 to increase the effect of having real gears.

While most driving enthusiasts dislike CVT transmissions with a passion, Toyota has one of the better ones.

Its benefit is greater efficiency and improved mileage. Toyota says the new generation Corolla had its suspension tuned and tested in Europe.

We immediately felt the difference in the corners with improved handling of the independent MacPherson strut front suspension and torsion beam in the rear. The overall ride is smooth and well controlled for a compact car.

The biggest gain seemed to be in the cornering ability that produced very little body roll while taking corners fast in the mountains west of Denver. The 2015 Toyota Corolla S is higher on the fun to drive meter than most compact sedans. With the S models dramatic improvements in ride and handling, it’s more than just basic transportation and borders on sporty.

Even the more upscale S Premium model has an attractive starting price point just below $23,000.

The 2015 Toyota Corolla S offers the Toyota quality and reliability reputation and will likely maintain its standing as one of the world’s most popular compact cars.

Editor’s Notes: While the review focused strictly on the Toyota Corolla S Premium, the photos show various Corolla trim levels.  Also, the rating scale of Automoblog.net is based 1 through 5, with 5 being the best.