If the Honda CR-V were a flavor, it would probably be vanilla. Chocolate may have more of a following with some, but vanilla is still a favorite with many ice cream lovers. The Honda CR-V has been one of those small SUVs that has a wide appeal even if it’s not as hot as a chocolate Sunday, with nuts on top.  Yet, the 2015 Honda CR-V AWD Touring appeals to a wide audience who like the small crossover because they can count on its tried and true virtues, year after year.

CR-V gets even better in 2015 for vanilla lovers.

The Honda CR-V has received some substantial upgrades for the 2015 model year. The small SUV has a new engine with more power and is more fuel efficient than the outgoing model. The new continuously variable transmission (CVT) helps it get 3-4 mpg improvement in fuel economy. The suspension and body architecture has been modified with a wider track and the CR-V maintains top safety status. The interior gets a new dashboard and console and new air conditioning vents in the rear have been installed. A new side camera is added to most models. And the new CR-V Touring model a suite of safety features, power tailgate and 18-inch wheels. Inside, the cabin of the new CR-V sports a revised dash panel and a more standard center console that does away with the deep storage compartment. It’s big enough to swallow a small dog! Also gone are the van-style pull down seat arm rests in favor of the new front console armrest. Gauges are easier to read but we could not share the same enthusiasm about the new buttons on the navigation and radio. This was a complaint this week as the controls are too close together and too small. When we tried to select the radio station, our fingers would change the mode and we’d have to reset it again. There’s adequate room and comfort up front.  The CR-V is easy to get in and out of because of the relatively flat cushions on the front seats too. Seats are heated and covered in leather on the Touring and they offer good support. The steering wheel and shifter on the upper trim model are also wrapped in leather. The CR-V cabin is all about convenience with a small families and their needs in mind.

The 60/40 rear seats fold down easily with the pull of a lever and the cargo cover can be removed and stowed for larger items. Dropping the seats is a one-pull job and doesn’t require removing headrests. It’s a clever system that is mechanical, though it acts as if it’s a power system.

We carried a load of boxes this week and the power tailgate opened up easily with the push of the latch.

The 2015 CR-V is now powered by the Accord’s direct-injected, four-cylinder engine and CVT automatic. The 2.4-liter four-cylinder delivers 185 horsepower and 181 pound-feet of torque. Fuel economy is improved with an EPA-estimated 26/33 – city/highway with a combined number of 28.  That’s with the all-wheel drive, using regular unleaded fuel.  The front wheel drive CR-V improves slightly at 27/34 – city/highway with a combined of 29. 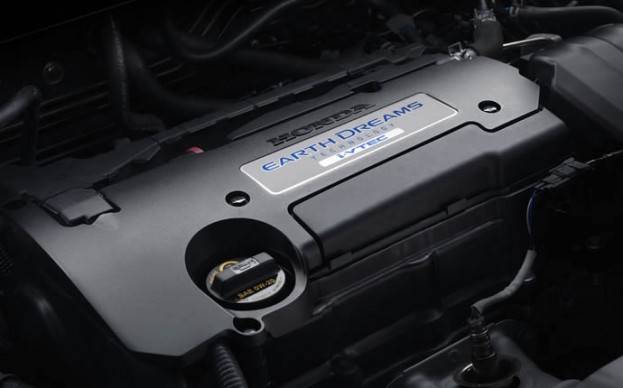 The CR-V is a small crossover in the “cute ute” class that is easily maneuverable in the city. Even with the revised suspension, the ride still leans more on the comfortable side than sporty.  The Honda CR-V isn’t about performance but it will handle every driving situation with confidence. There is very good visibility from the driver’s seat too which is important for a city commuter. We took the CR-V up into the hills west of Denver and the small crossover had enough power to get us past slower traffic without an issue. The cabin was quiet at highway speeds too because of added sound insulation.  The CR-V does use a CVT transmission which pushed the four-cylinder revs to the limit when we stomped on the gas but that’s the price you pay for near segment leading fuel mileage. A driver-enabled Eco-Assist feature is available and intended to save fuel by adjusting power-train operation, while still delivering full power when you need it.

We had snow this week and the all-wheel drive worked as advertised. The system operates as front-wheel drive until slip is detected and then power is sent to the rear wheels for additional traction. CR-V has 8 inches of ground clearance but the small SUV is not designed for severe off-road excursions.

The Honda CR-V is a capable, efficient, safe compact crossover that is ideal for a small, urban family. It’s got considerable cargo carrying ability and the new power lift gate is a nice addition. The top of the line Touring offers plenty of extra comfort and safety features that make it worth looking at. The new 2.4-liter engine has more power and the increased fuel mileage is a plus.

The new 2015 Honda CR-V is still a very tasty flavor that many people will enjoy. What do you think of the new CR-V AWD Touring?  Would you buy one?  Tell us here!
Editors Note: All Automoblog.net staffers love ice cream, regardless of flavor.

-Rating based on a 1 through 5 scale-
-Photos: American Honda Motor Co, Inc.