Back in 1997, Daimler (owners of Mercedes) decided to throw their already expensive hat (an S600 was over $130k then) into ultra luxury transportation. The big competition was Rolls-Royce, not really doing so hot at the time, and Bentley, same story as Rolls. I am not sure what Daimler saw in that market but they thought there was room for growth. So they pulled out a pre-war luxury mark that had been gathering dust since purchase in the ’60s and made a big ass car. The Maybach 57 and 62 were born.

These two models came to market in 2002 and were damn near the most money that you could spend on a car without buying a limited production Ferrari (looking at you, Enzo). The starting price for the 57 was over $350k and could easily break half a mil with options. For the target market, however, this is all fine and dandy. The idea was to create a luxury plane type experience for ground travel. The interior was excellent but the outside looked like a bloated Kia. Sales were pretty terrible. Daimler pushed Maybach along for over 10 years before throwing in the towel. They had only managed to pedal 3000 units in that time. Barely a year and a half worth of projected sales. During the same time period, Rolls-Royce was flying with more than 4000 units sold in 2014. The market was there, but the Maybach just wasn’t cutting it. Daimler closed Maybach in 2013 and apparently were losing almost $400k a car. That is harsh. So Daimler has decided to try again, this time under the Mercedes-Benz name. The new car is a sub-brand, not just a package. Merc was very specific on this point. I think someone is trying really hard to church up the S-Class. They say that Maybach will be treated similarly to the AMG sub-brand, providing prestige and exclusivity instead of AMG’s usual burbling noises and kidney punching suspension. The regular S-Class is selling great! 2014 was a banner year for MB and it seems like a good time to introduce a new, high end model. From my perspective, adding Maybach as a sub-brand is smart. It opens them to upsell regular buyers instead of getting them to switch to a different brand. I know that this doesn’t make sense as the last Maybach was also purely Merc but it didn’t have that all important tri-star emblem that the kids crave. The new car also is WAY cheaper. It is less than $25k to upgrade to the S600 Maybach over the regular (pedestrian) S600.

The Maybach edition shares its bones with the standard S600 with a few major changes and a ton of smaller ones. The biggest change is eight inches of extra wheelbase and overall length. This is all in the rear passenger area to really stretch out those legs. The Maybach is also exclusively sold as a four seater with that large, luxurious (how many times can I use that word!) console between the seats. I think this might just get in the way of some other activities but it is best to keep up appearances. Merc also went through a lot of trouble to make the rear occupants have the limo feel. They redesigned the rear doors to move the seats back from the door edge. Supposedly this “creates a feeling of exceptional privacy and exclusivity.” Right… I guess that makes sense. That is how Rolls does it so whatever. They are also claiming to be the quietest production sedan ever. MB has gone so far as to create an aeroacoustics wind tunnel for testing. Talk about taking this shit seriously. 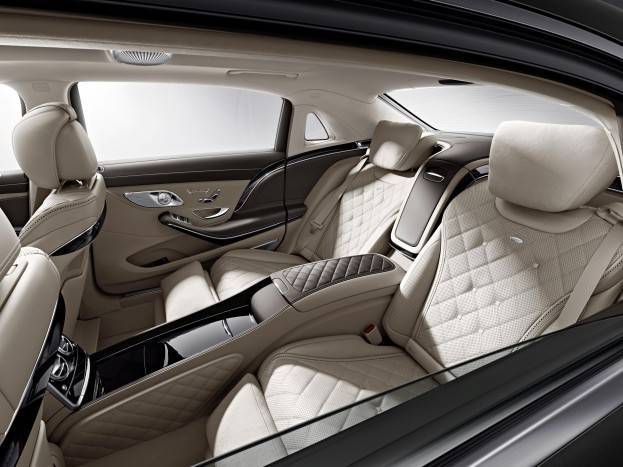 I think this thing could sell pretty well. Which probably means 5-10K units a year, worldwide. It makes the S-Class a little more exclusive and what corporate big wig doesn’t like a good one up? I doubt I will ever drive or be driven in one, but in case I do I will have a monocle on standby to help me fit in.