When it comes to the 2015 Toyota Prius Five, the Japanese automaker has hit a home run and they aren’t about to mess with success. It’s still the number one selling hybrid in America, and one of the most recognizable cars on the road.

Toyota hasn’t changed much for 2015 and why should they? When you have a good thing going, why change the formula? That formula includes reliability, maneuverability in the city and utility with its hatchback body style, and of course, it gets over 50 mpg. That’s a good formula and one that is still working for Toyota.

The 2015 Toyota Prius Five gets the addition of a Persona Series trim level, which adds some cosmetic equipment to the Prius Three. Also, a rearview camera is now standard across all Prius trim levels.

The 2015 Toyota Prius Five is powered by the same reliable 1.8-liter four-cylinder engine coupled with a pair of electric motors. Combined, the hybrid synergy drive system delivers a total output of 134 horsepower to the front wheels through a continuously variable transmission. The third-generation Prius still gets great fuel-economy and is a good reason to look at the hybrid model. The Prius Five we are testing gets an EPA-rated 51/48 mpg city/highway, and a combined rating of 50 mpg. Prius still takes regular 87 octane fuel at the pump. Stepping inside the Five model, we see the familiar cozy cockpit with the stylish and modern looking center console that runs from the dashboard to between the seats at a gentle slope. The SofTex trimmed front seats are comfortable and there is room in the rear for adults without being cramped. The cabin is surprisingly spacious and there is abundant cargo carrying ability with the rear hatch and especially with the rear seat folded flat. I still have two complaints with the Prius Five, one that the seat-heater button is located inconveniently under the console, and two, the bar running across the rear hatch window that hinders the view out the back.

2015 Toyota Prius Five On The Road

On the road, the 2013 Toyota Prius Five with the 1.8-liter gas engine combined with its electric motors delivers the ideal setup for stop and go city commuting. There are three driving modes: EV, allows for all-electric driving for a very limited distance at 25 mph or less. ECO mode minimizes fuel consumption by reducing the throttle opening and restricting the air conditioning. The Power mode is for maximum acceleration performance. We pushed the hybrid hard up I-70 and we were surprised at how much power the hatchback has. 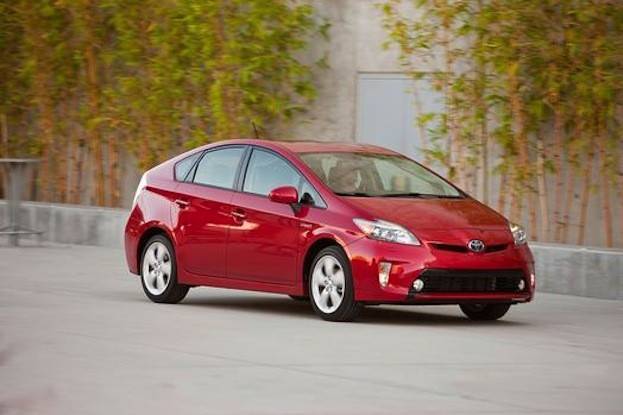 The continuously variable transmission (CVT) is remarkably smooth for this type of transmission. CVT’s are designed for fuel-efficiency and the winding-up sound can be a bit annoying. Toyota has developed the CVT technology that is better than most. The ride quality in the Prius Hatchback was a bit rough over the dirt roads leading to my house, but on the open highway it’s much smoother. This tester came with the larger 17-inch wheels and 215/45R17 tires which may have contributed to the ride quality.

The big difference in the hybrid technology is the use of the regeneration quality of the four-wheel disc brakes. They are much more sensitive and take a bit of getting used to. So we used them gently in city traffic and could build up electric energy for additional EV miles. The more we used the brakes, the more battery juice build up, enabling us to use EV mode more in city driving. Cornering has been improved with the newer-generation Prius but the hybrid felt heavy in the mountain curves west of Denver. 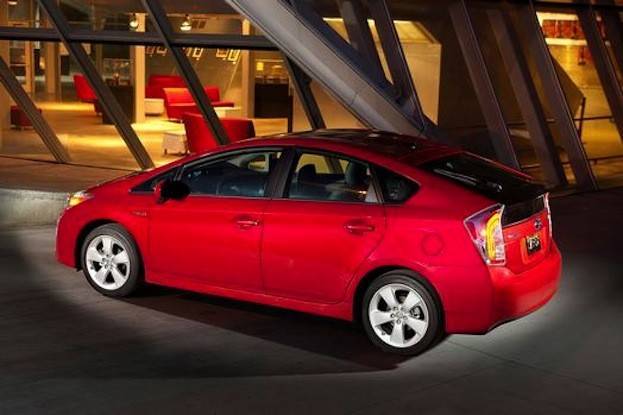 The Prius Five hatchback is a handy hauler and cargo space is generous with nearly 40 cubic feet of cargo capacity when the back seats are dropped flat. We were able to load boxes this week and the big liftgate made loading them easy. Overall, the 2015 Toyota Prius Five is a practical and efficient city commuter with plenty of cargo space. The formula of reliability, maneuverability in the city and utility with its hatchback body style, and 50 mpg, is a good formula and one that is still working for Toyota.

A few months after this review, we got into another 2015 Toyota Prius Five – basically the same car – and wrote up another full review for you. There’s an old saying: “if it’s not broke, don’t fix it.” This would apply to Toyota’s Prius, by far, the best-selling hybrid in America. It’s also one of the most recognizable cars on the road as everyone knows what it is when they see one.

What is the Prius’ unique selling proposition?

With its 50 mpg combined fuel-mileage, Toyota reliability, and hatchback utility, it’s been and will continue to be, the go-to hybrid here in America. We recently test drove the 2015 Prius Five model with the Advanced Technology upgrades.

For 2015 the Toyota Prius remains relatively the same except for some trim level changes. A review camera is now standard across all trim levels.

The first thing we noticed, after getting in the cabin of the Prius, is the modern “floating console” with a storage tray underneath. Unique interior styling sets the Prius apart from the competition. Some may not like the console setup, but it hasn’t hurt sales in the least.

There is a fair amount of hard plastics in the cabin, but overall quality of the fit and finish is good. This can be a great thing for a family that needs to clean up after kids who have put their dirty hands all over the inside.

Where the Prius shines is in the area of utility. Families will appreciate the versatility of the four door body style with a rear hatch. The hatchback is useful for loading cargo and weekend sports equipment, while the backseat offers plenty of room for a growing family. We still have an issue with visibility in the rear, however, with the annoying bar that runs across the rear hatch window.

The 2015 Toyota Prius is powered by a hybrid drive system that uses a 1.8-liter four-cylinder engine, coupled with a pair of electric motor/generators.

Together they send a total output of 134 horsepower to the front wheels through a fuel-saving continuously variable transmission (CVT). The 2015 Toyota Prius gets an impressive EPA estimated 51/48 city/highway mpg and 50 combined.  Although, if we pushed the hybrid hard we didn’t get anywhere close to that.

Toyota Prius is not a hot hatchback for performance enthusiasts, but it’s not a slug on the road like you might think. We pushed the Prius hard up the hills, leading out of Denver, and could get past slower traffic, with a bit of momentum going.

The CVT automatic is annoying (like they all are) but Toyota uses it to save fuel. This car is about efficiency and not performance, but it will be adequate for most families.

Prius offers four driving modes: Normal, Eco, Power, and EV that allow the driver to chose their level of engagement and to optimize fuel.

Eco feels like you have a lead sled behind the car, but gets the best fuel-economy. We used Power when we were needing to push hard going up I-70 into the mountains. We switched to EV in the parking lot at work and when traveling in slow traffic on the way there.

This mode uses electric power only and allows a maximum speed of 25 mph. It requires at least a half-charged battery pack. Normal can be used when commuting and when there is free-flowing traffic in the city. Ride quality is comfortable and will handle average bumps well. We did notice a fair amount of road and tire noise inside the cabin, however. As Toyota does everything possible to keep the hybrid light to save fuel, we believe the road noise issue was overlooked. The Prius is low on the driver engagement scale and even lower on the fun-to-drive meter, but that’s coming from performance car enthusiast and journalist.

Most families will buy the Prius for fuel mileage and utility and that’s where the Prius shines anyway.