Alfa Romeo 4C drops its top with the 4C Spider Highly anticipated since the initial announcement, the Alfa Romeo 4C has proven to be a great return for the brand in the United States. With the latest offering Alfa Romeo is following a recipe that many other manufacturers have done before. Take their sports car and cut the roof off.

The result is the 2015 Alfa Romeo 4C Spider and it recently made its debut at the North American International Auto Show. The fact that a 4C Spider was coming wasn’t exactly a big shock, since  spy photos of the car could be found online since December of last year. Still with all of that said it’s still quite exciting that the 4C Spider has made its debut. What’s great about the 4C Spider is, first of all its a Spider in the truest sense. What does that mean, diving back into automobile history spiders were light-weight roadsters. 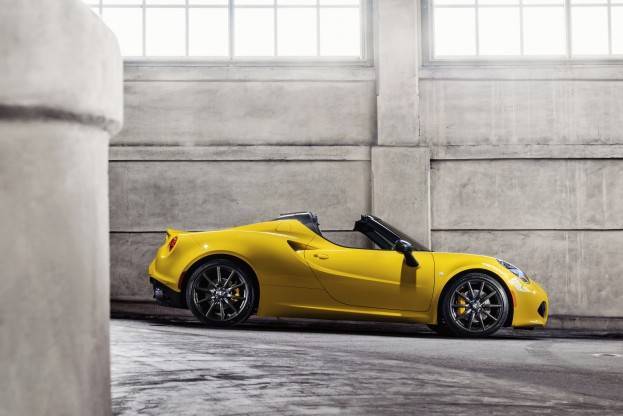 Yes, it has gained some weight by losing it lid, but only 132 pounds, I’ll take that every time. What really sells it for me is the fact that it’s losing it lid. I’m not really a huge fan of convertibles, but what taking the top off of the 4C does, is take an already visceral experience and take it to the next level. The 4C has a no frills approach is taken to another level when you can feel the wind in your hair and are more exposed to the elements. Also the car doesn’t have power steering, why? To save weight and to give a better steering feel. I have to say there is nothing like driving a car without power steering. 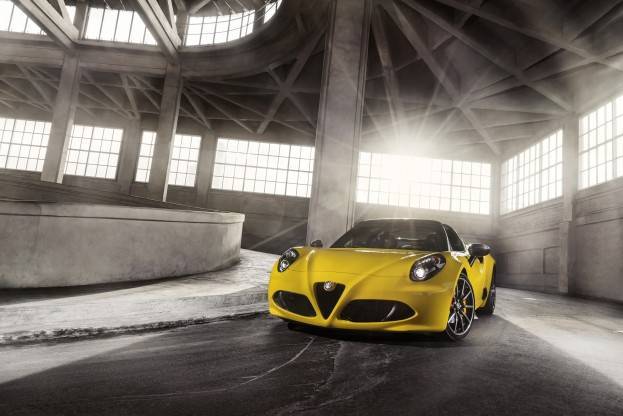 Changes, no top, that’s really the only big change. That’s fine. The Spider will have the same revolutionary carbon fiber monocoque that weighs in at 236 pounds, just like the coupe. It will also employ the same 1750 cc direct-injection turbocharged inline four, producing 240 horsepower. The transmission is a six speed dual clutch, which is the same as the coupe. Yes, I wish we could get a proper manual, but you can’t get everything you want. You can expect to see the 4C Spider in dealerships by summer. I personally can’t wait. When I first heard Alfa Romeo was coming to the states I was worried that it would be watered down. So far, that’s not the case, Alfa Romeo’s return has been nothing short of spectacular.