While the headline to this piece is a bit sensationalist, it is worth pointing out that the way Ford is representing the engine noise of the new 2015 Ford Mustang EcoBoost is disingenuous.

If you have yet to hear about this new Mustang model, it features a 2.3-liter Ecoboost engine, which brings the Mustang back to the world of turbo. But despite that sounding like a downgrade, the Ecoboost boasts an impressive 310 hp and a 0-60 time of 5.6 seconds. It also gets 32 miles to the gallon on the highway, which is the best of any pony car this generation.

So while it’s no slouch in comparison to the entry-level v6 Mustang–in fact it beats it in torque, which will make for a better driving experience–the EcoBoost has a muscle car Achilles heel: sound.

Three weeks ago, Road and Track’s Jason Cammisa pulled a fuse while driving the EcoBoost and discovered that the classic engine noise in the cabin you expect from a muscle car disappeared. Later on, it was confirmed that the EcoBoost Mustang was fitted with “Active Noise Control” and “Active Noise Cancellation” systems.

You’ve probably heard of noise cancellation before, as it’s a feature in many newer cars to reduce interior noise caused by the vehicle’s engine and the road while traveling. But what about noise control? Both sound pretty similar, but “Active Noise Control” is the system that’s giving EcoBoost drivers great noise to listen to on the road.

This has become common practice for many turbocharged vehicles, but not one that’s heavily advertised–for obvious reasons.

It’s not that Ford is technically creating artificial noise with the 2015 Ford Mustang EcoBoost’s turbocharged engine, but it is funneling it from the engine to the cabin via its speakers. So essentially, while you may be thinking you sound like a muscle car on the inside, people on the street may not get the same impression.

What I find most interesting about this development is the different directions that Ford is headed when compared to Dodge. While Ford has unveiled a more efficient Mustang that is a baby step above the V6 model with 310 hp, Dodge unveiled a less efficient Challenger (SRT Hellcat) that is leaps and bounds above the standard V8 model with 707 hp. And there’s just nothing like the sound of the Hellcat.

2015 Ford Mustang EcoBoost Plays Itself Off with Sound Symposer 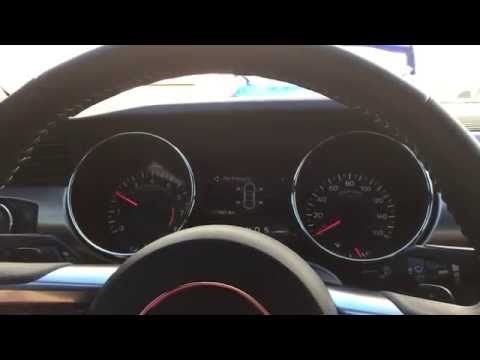