Three New BMWs: The Pig, the Leopard, and the Shark

BMW has started to really shake things up in the last couple of years. Some of their new cars have been expected refreshes of great selling models, and some have been a little more creative. The three that I want to look at today, are the two new electric cars that Bimmer has released and a refresh of an old favorite of mine. This is one of the strangest looking cars to come out of the Bavarian factory in a long, long time. The last weird little BMW that I can recall coming to the US, was the Isetta (See gallery). That wasn’t even a real BMW as it was designed in Italy. Back on topic, the i3 is BMW’s new electric people mover. It starts in the low $40k range and reminds me so much of a little piggy! I think that some of the designers from BMW’s Mini division have crossed over to help make the i3. The i3 has some funky lines (look at that rear door!) and the uprightness of the new cute ute segment. While it may not trip everyone’s trigger for an attractive car, it works for me. The more I look at it the more interesting I find it. It sort of reminds me of a CRV that has been lowered and streamlined.

The tech is where it starts to get really impressive. The body work uses a type of carbon fiber reinforced plastic to reduce weight. This may be the cheapest car ever to use carbon fiber in its manufacturing. It is worth mentioning that this isn’t the same thing that Pagani uses in their cars. The BMW i3 is also the first production car to offer a range extending gas motor that does not directly drive the wheels. The gas motor is only used to run a generator which charges the electric drives batteries. This is what GM lead us to believe the Volt did, but was actually much closer to a Prius in reality. The tech is great but it isn’t without its problems. The all-electric version can only go 81 miles on a charge (I drive 85 a day) and the version with the range extender tacks just under that on to the total. The range extender only has a 1.9 gallon gas tank. Therefore, if you drive nice, you might get a total of around 150 miles before having to charge/fill the gas tank again. Not exactly stellar. However, we have to start somewhere, and this is better than the Nissan Leaf. The BMW at least provides an option to quickly get back on the road with a stop at a gas station.

BMW i8 – The Leopard 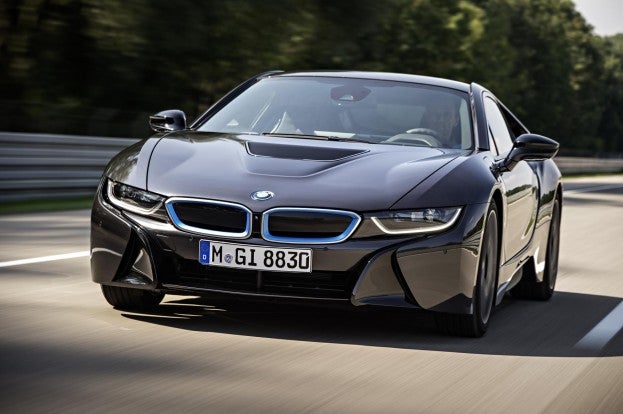 Hot damn, is this thing sexy or what? The design language is obviously similar to the i3, but BMW is designing the future of sports cars with the i8. Unlike the i3 above, the i8 is a plug-in hybrid that doesn’t have to get charged every night to work. The three cylinder, turbo, gas engine, and six speed automatic (R.I.P. my beloved manuals) send 231 hp to the rear wheels. The 131 hp electric motor and two speed automatic send power to the front end. How cool is that! This system seems to work well as BMW claims a 0-60 mph in  4.4 seconds. That’s not bad for a car weighing in at just shy of 3300 lbs and a combined EPA rating of 74 MPGe. Even without the electric motor, the EPA rates the i8 at 29 MPG combined. I really like the i8 but it is one of those unattainable cars for regular people. It has the air of a low production, proof of concept that I can’t see BMW making for more than a hand full of years. I could be wrong, but the vibe of this can makes it somewhat unapproachable for me. Anyway, I think that this could be a turning point in automotive history. I am glad BMW built this, even if it is unlikely that I will ever see one outside of an auto show. Ah the feeling of familiarity. The BMW M6 has been around on- and- off for three decades now. It seems to be one of those cars that I always have a soft spot for in my heart. The long, hunkered shape. The raucous engine. The availability of a real, row it yourself, manual transmission. I even liked the 2006 version with Bangle Butt. The M6 started life in 1983 with a trick inline, six cylinder engine capable of hitting 0-60 mph in 6.8 seconds (in US trim). That sounds slow today, but a period Ferrari ran similar times. The M6 ran through 1989, when it was retired for the time being. The M6 laid dormant until the 6 series returned in the early 2000s. The M6 came back in 2006 with a 500 hp V10 and an interesting set of electronics to allow for different power levels on-demand. That model went out in 2010 and was quickly replaced in 2012.

The newest M6 came with a twin turbo V8, making a staggering 560 hp. For the first time, the M6 was offered as a Gran Coupé (which basically means a “slick four door coupe”). For 2016, these models are getting a face lift and some new tech. The main items that are being updated will be revealed at the Detroit Auto Show in January. I imagine that the core bits will remain, which is okay by me. That nasty V8 and sexy body don’t need much adjustment. The 2012 model already runs to 60 in just over 4 seconds. This makes it healthy competitor to others in the genre. I am just happy to see BMW keeping this model around as they move on to future cars like the two above.