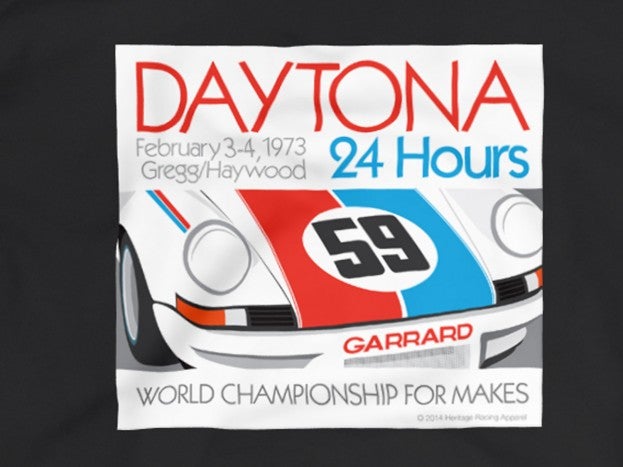 Sometimes a day doesn’t go by that you don’t hear about some guy making car T-shirts and selling them online. Finding cool unique tees that you actually want to wear, however, is a different story.

Jeff and Casey Maciejewski, the father-son team behind Heritage Racing Apparel, are self-professed racing nerds who make what would better be described as wearable posters that pay homage to awesome cars and equally-as-awesome races. Jeff is a journalism professor and Casey is his 16-year-old son and business partner. They say that they sit around and talk about cars and races (doesn’t everyone?) and once they agree on a car and a historic race, they set about creating a unique period-inspired design.

Lots of different cars and races are offered: BMW and Volvo in the German Touring Car Championships; Porsche at Le Mans and the Paris-Dakar Rally; Ferrari at Sebring and Daytona, and the list goes on. They’ve been selling adult shirts on their Etsy store since October, and they’ve just added kids’ shirts to the mix, including onesies for infants and toddler tees.

Check out the gallery of tee designs below and head over to their Etsy shop.