Sponsored: The Citroen C4 Cactus – Another Quirky Euro Hatch the US Won’t See

It’s true – Europe tends to get far more variations of cars than America does. Sometimes it’s a good thing and sometimes I really wish a certain model were available in the US.

Now, we don’t even have Citroen cars available in the States (anymore), but we still talk about them quite a lot. After all, they’re a huge player in the worldwide automotive market, and even though you can’t buy one of their models, you could be driving a car powered by one of their engines. If you own a Ford or one of their child companies’ cars, look under the hood.

But why else is Citroen important? Because they make some of the quirkiest cars on the road. In fact they have a whole sub-brand called DS (or Distinctive Series) that’s dedicated to providing a “unique experience” to its drivers with new features, contrasting body panels, and a look totally different than the parent car the models are based on.

Recently, the French company announced what they call the Citroen C4 Cactus. While it’s not technically a DS model (or a cactus), it’s significantly different than the Citroen C4 Hatchback it’s based on. I mean just look at this head-to-head comparison:

The typical Citroen C4 is something along the likes of the Ford Focus or Volkswagen Golf, whereas the C4 Cactus falls more in line with the quirky Kia Soul or Nissan Cube. That’s why this is interesting – the US is starting to really like quirky and unique cars, which is something that wasn’t true in the past.

So would the C4 Cactus sell well in the States?

The thing about its quirkiness is that it doesn’t actually stray that far from our comfort zone. If you take away that thing on the side (called an “Airbump” designed to prevent door dings and scratches), it’s pretty slick-looking. The headlamps are aggressive and although the front-end brings on a hint of Pontiac Aztek, it’s not too much.

The profile view has a resemblance to the Range Rover Evoque, and I don’t care who you are, that’s a nice side look to have.

Inside, the Citroen C4 Cactus has an interesting design as well, from the glove box (“Top Box”) designed to look and operate like luggage, to the front seats to make you feel like you’re sitting in a sofa, the panoramic sunroof, and the leather door handle straps, all meant to give you a feeling of luxuriousness. All of the car’s controls are manipulated through the standard 7-inch touchscreen display (good to see those starting to come as standard now,) including music and pictures, navigation, climate control, driving aids like the rear-view camera, bluetooth, and Citroen’s 3G Multicity Connect system which can hold apps like Trip Advisor, Fuel finder, and traffic apps.

The C4 Cactus isn’t a hot-rod though, it offers a few different engine options – most notably the BlueHDi 100 diesel engine which manages to get a whopping 91.1 mpg (UK – this translates into 75.9 mpg in the US).

So what do you think, would you buy a Citroen C4 Cactus? 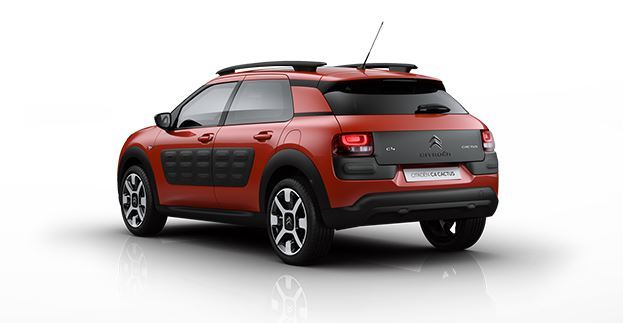 Disclosure: This article is sponsored by Citroen. All views and opinions expressed here are my own. Check out our advertising guidelines to see why we’d never steer you wrong.