VW Shows Off the XL Sport Concept in Paris

When automotive giant Volkswagen Group set out to build a hybrid, they utilized a recipe that would be ideal for a sportscar: light weight, amazing aerodynamics and a low center of gravity.

The result was the Volkswagen XL1.

But what happens when that same automotive giant takes that same recipe and adds a powerful two-cylinder engine from a motorcycle?

Deriving a sportscar from the world’s most fuel-efficient production car, may not the first choice for many, but thankfully Volkswagen used it as a starting point and the result is nothing short of stunning. In order to make its hybrid a sportscar, Volkswagen replaced the 800 cc turbo diesel with the Ducati 1199 Superleggera V-Twin two-cylinder engine. The 1199 cc double-overhead-cam engine makes 197 horsepower and can rev all the way up to 11,000 rpm. Putting this power to the ground is accomplished through a seven-speed DSG dual clutch.

Thanks to this high-revving motorcycle engine, the aforementioned light weight, and co efficient of drag, the XL Sport has a top speed of 168 miles per hour and a zero to 62 time of 5.7 seconds.

Its aerodynamics are one of the most interesting parts of this car. The original XL1 had a coefficient of drag of 0.189, which has increased to 0.258.

This is due to changes made to optimize downforce, special vanes that direct the air, wheelarch vents, a extendable rear spoiler (like the one utilized by the Lamborghini Aventador) and other changes. With all of the changes to the powertrain, radical changes were needed to the chassis, which includes the use of steel subframes, which house upper and lower control arms in the front with a pullrod actuation for the dampers and pushrods in the rear. Additionally stopping will be handled by ceramic brakes.

The two models do share certain design similarities, but there are certain characteristics that set the two apart.

First of all, the XL Sport is longer and wider. This is necessary because of the need for additional downforce and packaging of the chassis and powertrain.

Currently there is no word if the XL Sport will be put into production.

Let’s hope it does, even if it’s a limited production run like the XL1, which is shares so much with. 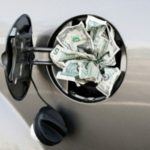