The 2015 Kia Sorento is a rare bread when it comes to the compact crossover class. It comes with a V6 engine that is a rare option in this class. The Mitsubishi Outlander is the only other competitor that even offers a V6 powerplant. That sets this crossover apart from the competition like the Honda CR-V, Ford Escape, Mazda CX-5, and Toyota RAV4. This week we’ll be testing the next to top model 2015 Kia Sorento SX with all-wheel drive and the 3.3-liter V6 engine ($38,300).

Table of Contents show
What’s new for 2015?
Kia upgrades its quality
Sorento on the road
Conclusion:

The 2015 Kia Sorento remains basically unchanged for the 2015 model year and gets new packaging options and enhanced technology. Sorento underwent a major update for the 2014 model year with new or re-engineered content at 80 percent. Like every crossover in this class, the 2015 Sorento comes with a unibody design, which is basically a front-wheel drive vehicle with an all-wheel drive option.

Stepping inside, we could tell the Sorento is bigger than most in this class. This tester comes with the optional third row which allows seating for seven passengers. This also sets Sorento apart from the crowd as Kia and Mitsubishi are the only players in this segment to offer a third-row option. This makes Sorento an ideal family hauler as there is plenty of room to transport kids and cargo. With the third row option, some cargo space is sacrificed behind the rear seat. Kia quality has changed drastically in the last few years and Sorento has a quality feel and appearance inside the cabin. This SX tester came with leather seats on the first and second rows, heated and ventilated front seats, push button start, tilt/telescoping steering wheel, blind spot detection and rear air conditioning. Outside it featured a panoramic roof with power sun shade, heated outside mirrors, and a power liftgate.

The seats are comfortable and widely adjustable with the power-adjustable driver’s seat. With the tilt-telescoping steering wheel, any family member can find the perfect driving position. The center stack is dominated by an eight-inch touch screen that’s home for the navigation system, rear camera and Sorento’s updated infotainment. Kia calls it UVO eServices, and it includes a broad range of connectivity options. Sorento’s cabin is a plus for this class as it’s roomy and has lots of cargo capacity. The second row offers adjustability and respectable leg room.

Sorento on the road 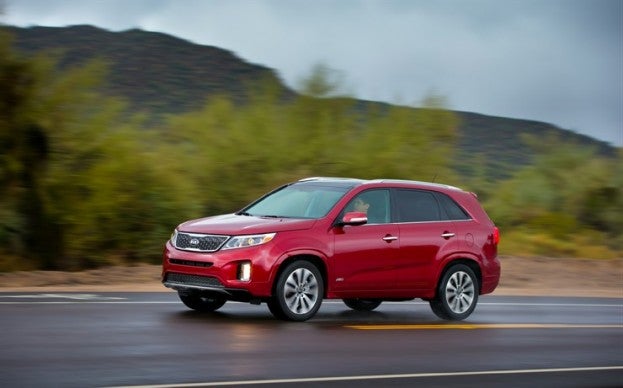 This 2015 Kia Sorento SX AWD is powered by the optional 3.3-liter V6 engine that features direction injection to produce 290 horsepower and 252 lb. ft of torque. Fuel economy for the 3.3-liter V6 is an EPA-estimated 18/24 city/highway mpg with all-wheel drive. It comes mated to a 6-speed automatic transmission with Sportmatic and runs on regular unleaded gasoline.

We found the V6, even when carrying 4 adults, to have enough power to pull the mountain roads west of Denver without a problem. It would have no issue with carrying a full load of kids with cargo to the soccer game. We found the 3.3-liter V6 to be smooth and generally quiet, sounding a little busy only at full throttle when pulling hard up I-70 as we were passing slower traffic.

The six-speed automatic was also smooth and managed downshifts for passing and climbing hills without calling much attention to itself. We would recommend the V6 option over the four cylinder (191 hp) for families who will be using it for other things than just city driving. The 3.3-liter V6 generates respectable power when pulling away from stoplights and enough punch for passing on two-lane highways. The Sorento also was quiet at highway speeds as KIA engineers have done a very good job of noise suppression. The 2015 Kia Sorento is among the largest of the compact crossover utility vehicles and boasts a roomy cabin, with lots of cargo capacity and it feels more upscale than the previous generation. It comes with plenty of high-tech features that keeps it current with the rest of the market. The ride is smooth and the V6 option is a rare thing to find in this class. All-wheel drive is a smart option and offers all-weather capability.

The South Koreans have made huge strides with vehicle quality, and the new Sorento has the feel of solid goods. The 2015 Kia Sorento sets itself apart from the crowd even further as Kia and Mitsubishi are the only players in this segment to offer a V6 engine and third-row seating. For families needing a little more power and seating space, the Sorento SX V6 with three rows is a good choice.