The 2014 Dodge Durango R/T is really a muscle car from Detroit that is masquerading as an SUV. This heavyweight will excite the most passionate performance enthusiasts on the planet. I’ve driven sports cars that aren’t as aggressively performance oriented as this four-door SUV. This week we’ll be testing a 2014 Dodge Durango R/T AWD that comes with a Hemi-powered V8.

Dodge revamped the Durango in 2011 and gave it muscular exterior styling, a quiet, comfortable interior; extra cargo capacity; class-leading power and towing capability; and road-hugging ride and handling. For 2014, Durango gets a new eight-speed automatic transmission, revised front and rear styling, and an updated interior with newly available features like an 8.4-inch touchscreen display and a rear-seat Blu-ray player.

This 2014 Dodge Durango R/T V8 AWD tester ($41,395) came with the optional 5.7-liter HEMI V8 that turns this SUV into a true muscle car. If you want the best of both worlds, SUV and performance, this is the vehicle for you. The new 2014 Durango even has the muscular exterior styling to go with all that power. How much power does it come with?

The optional 5.7-liter HEMI V8 pumps out 360 horsepower and 390 lb.-ft of torque. When you step on the gas pedal, this HEMI-powered SUV sounds like a true performance car. I found myself all week, just getting into the pedal so I could hear the growl and feel that power. I’m sure my fuel-mileage was nowhere near the advertised 14/22 city/highway EPA estimated mileage. 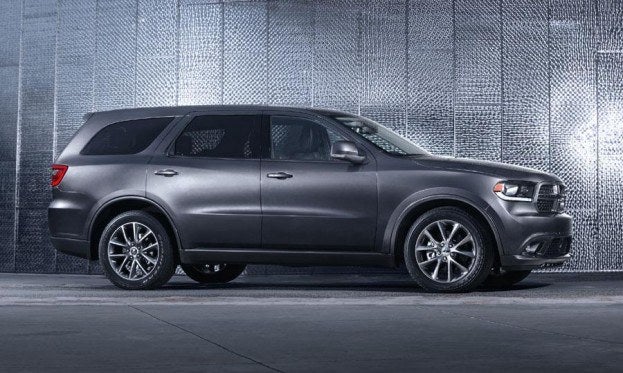 But Durango comes with a fuel-saving feature that helps those of us who can’t drive sensibly. It comes with a cylinder-deactivating Fuel Saver Technology that alternates between V8 and four-cylinder modes depending on demand. The technology is seamless, and we didn’t notice the transition from eight to four and four to eight cylinders. It also has a new Eco Mode that optimizes throttle sensitivity, the transmission’s shift schedule, the cylinder deactivation and interactive deceleration fuel shut-off, which cuts fuel delivery when coasting to reduce consumption.

Driving dynamics of a smaller vehicle

The most notable change for 2014 is the new 8-speed automatic transmission, which improves fuel economy and performance. In the week we had the Durango, it was a pleasure to drive the new eight-speed gearbox. The new automatic serves up impressively smooth shifts while providing a numerically small but still significant improvement in EPA fuel economy ratings.

The new transmission makes great use of all that HEMI power and produces impressive performance for a bigger SUV. The Durango R/T has surprisingly good handling and driving dynamics for its size, due to its unibody structure that uses high-strength and ultra-high strength steels to improve driving dynamics while decreasing weight.

Durango shares its basic structure with the all-new Jeep Grand Cherokee. Its short/long arm front and multi-link independent rear suspensions have aggressive shock and spring rates, large anti-sway bars and isolated cradles front and rear for precise handling with a cushioned ride. It comes with standard electro-hydraulic power steering and electronic stability control that help maintain steering feel and vehicle stability in the corners. If you didn’t know it was such a big vehicle, you would think you were driving a smaller sports crossover.

Inside, the 2014 Dodge Durango has definitely been designed with families in mind. This SUV can seat seven passengers with the standard seating. The standard 60/40 middle-row seats fold and tumble, recline 18 degrees and are available with heat. The third-row seat splits 50/50 and is easily folded from the rear of the vehicle, and a switch in the instrument panel remotely lowers its headrests when it’s not in use. The cabin is roomy and comfortable, and comes with attractive and upscale materials. Up front, the seats are roomy and comfortable. The second row is average for adult legroom, but great for the kids. This tester came with heated front and second row seats. The third row can be easily accessed and offers a surprising amount of leg-and headroom. We put a six-footer back there for a trip to the restaurant for lunch, and he didn’t complain about anything but my aggressive driving. With the second- and third-row seats folded down, the Durango can carry up to 84.5 cubic feet of cargo, which is just average for the class.

This R/T tester came with  the V8 HEMI engine, leather seats, 20-inch alloy wheels, a sport-tuned suspension, xenon headlights, body-color accents, a power liftgate and an upgraded nine-speaker sound system. The AWD option on the Durango is a must for those who live in cold-weather climates. It performed well in a wet snow that fell in the foothills west of Denver. All-wheel drive includes a low-range transfer case for off-road use. It also came with the optional Trailer Tow Group and can tow up to 7400 pounds with the big HEMI.

The 2014 Dodge Durango R/T V8 AWD is a man’s SUV, but at the same time, it will keep mom and the family very happy. Dad will have fun driving this SUV if he can get it away from his wife. It features a roomy, comfortable cabin with three-rows and plenty of cargo-carrying ability. With the optional HEMI V8, it has impressive power and tow ratings that you typically see only on larger, more traditional SUVs. It has muscular styling, a quiet, comfortable interior; extra cargo capacity; class-leading power and the road-hugging ride and handling of a smaller SUV. The biggest problem with the Durango R/T? You won’t be able to keep your foot out of the gas pedal. 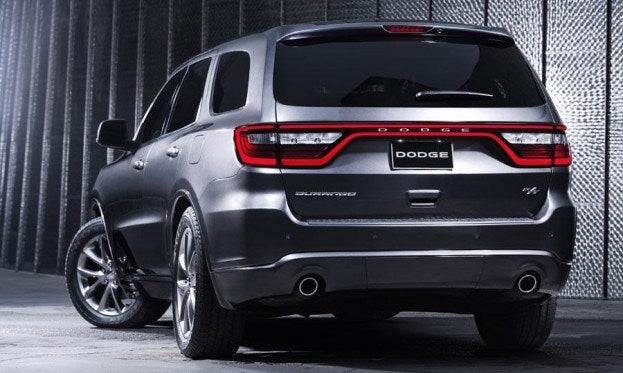 On This Page
What’s new for 2014?
Driving dynamics of a smaller vehicle
What’s inside?
Conclusion