Name two rear-wheel drive sedans you can snag for under $30 thousand new. Not easy, is it?

Consumer preferences have all but relegated RWD sedans to luxury or near-luxury brands – or at least to brands asking near-luxury prices. Fortunately for those not interested in owning a new BMW or someone else’s problems, Dodge has the market covered with the Charger, the last affordable RWD sedan standing.

From the crosshair grille flanked by angled headlamps, the Charger possesses an attitude as only an American car can, even in Jazz Blue. It screams one of two things, “get the hell out of my way” or “pull over now,” and it apologizes for neither. Front door gashes evolve into strong character lines that run the car’s remaining length, uniting at the rear with car-width LED taillights, a throwback to Charger’s ’60s muscle car era. 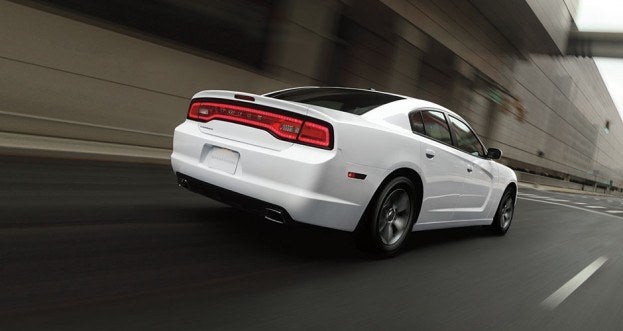 Pushing the Start-Stop button fires up Charger’s standard 3.6-liter Pentastar V6. For those thinking a V6 Charger is all bark and no bite, it’s all in what you want. For most people, 292-horsepower is plenty of power. You probably won’t burn out (I didn’t try), but you also won’t be left in the lurch. Higher trims offer 5.7-liter or 6.4-liter V8 HEMIs and all-wheel drive. The Pentastar was mated with a five-speed automatic transmission. While gear changes with Charger’s five-speed were smooth, it tended to not be as responsive. I’d pay the extra $1,100 for the better eight-speed auto. Charger’s Pentastar/five-speed combo was good enough for a mixed driving fuel mileage of 24.3 miles per gallon. EPA estimates are 18 mpg city/27 mpg highway.

Its spacious five-passenger interior has been largely left alone since Charger’s 2011 update. Luckily for Dodge, it’s aged well. USB and AUX ports are hidden in the center console, connecting to the Charger’s Uconnect system with standard 4.3-inch touchscreen.

My only issue with its layout is the radio controls. This isn’t much a problem with Uconnect’s 8.4-inch screen (shown below) because you can volume on the interface. Rather than being located near the radio faceplate, volume and tuning knobs are set by the dual climate controls. Again, it wasn’t a deal breaker, just took some getting used to. Audio controls are also mounted behind the steering wheel spokes.

Behind the wheel, LED backlit instrument cluster is sporty and easy to read in day or nighttime driving. If you prefer digital feedback, a 4.2-inch, full-color info center nestled between the tachometer and speedometer displays speed, fuel economy, trip, and other vehicle info.

OK, the Dodge Charger SE isn’t the most refined sedan offered, but with its $26,495 starting price, that can be overlooked. Not many options are offered, which could deter some buyers. If you choose an SE with the eight-speed auto, you’re looking at $27,595. At what point do you look at the SXT with an MSRP of $29,295 (RWD)? It’d be a better deal for those who want the standard eight-speed auto and chance to get a sunroof, the Uconnect with the 8.4-inch screen and navigation, or all-wheel drive.

When you compare the Charger with competition like Ford Taurus, Nissan Maxima, Hyundai Genesis, and Chevy Impala, only the Genesis is RWD, and its starting price is thousands more. However, opt for a higher trim level and tack on options, competition gets fierce, and Charger’s advantages can blur.

If you’re a shopper concerned with price, the 2014 Dodge Charger SE is worth a look. If nothing else, it’s styled to kick some ass.