The Volkswagen Beetle’s legacy is one so unique it seems to transcend automotive genres. The original Volkswagen Beetle originated as an economy car designed to mobilize pre-World War Two Germany by Ferdinand Porsche. Its breakthrough style for its time resulted as the inspiration other automobiles.

As the Beetle grew into a worldwide success, the car became the basis for a variety of motorsport vehicles. Altered into off-road buggies and rally cars, the Volkswagen Beetle’s most visible appearance in racing is obviously the adventures of Herbie the Love Bug. For 2014, the current generation Volkswagen Beetle will promote a serious, highly emotional character on the Global RallyCross tour.

Volkswagen of America will make a full commitment to the 2014 Red Bull Global RallyCross series with a joint venture with Andretti Autosport. A venture announced as the Volkswagen Andretti Rallycross team at the 2014 Chicago Auto Show, the partnership is resulting in a high-powered version of the iconic Beetle. The 2014 Beetle Global RallyCross vehicle is by no means Herbie but a 560-horsepower TSI engine connected to an all-wheel drive system certainly makes the race car a lively creation.

The turbocharged and direct injection engine being used in competition is based on the EA888 powerplant recently added to the street version of the Beetle. While a production version all-wheel drive Volkswagen Beetle is not presently available, the Global RallyCross allows cars to adjust on that parameter of a vehicles. The Dodge Darts campaigned by Travis Pastrana in 2012 and 2013 were also fitted with a rallycross-only all-wheel drive system. 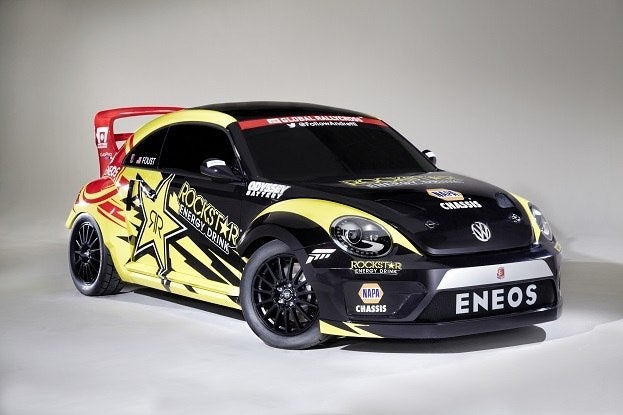 In order to build a strong effort out of the box, Volkswagen and Andretti Autosport recruited a pair of American veteran drivers with X Games gold medals. 2011 and 2012 Global RallyCross champion Tanner Foust as well as former Formula 1 driver Scott Speed will be piloting the Andretti Autosport effort for 2014. Both Speed and Foust ran Ford Fiesta ST vehicles last season. Tanner Foust brings Rockstar Energy Drink sponsorship to the Volkswagen race program for 2014.

Signing up campaign with Volkswagen on the 2014 Red Bull Global RallyCross tour, Andretti Autosport is rapidly diversifying their motorsport program this year. The race team helmed by past IndyCar champion Michael Andretti has recently announced they will field an American effort in the inaugural Formula E series. Both efforts will join Andretti Autosport’s ongoing IndyCar team.

Last year, the organization won five races with drivers Ryan Hunter-Reay and James Hinchcliffe. However, even Andretti Autosport’s IndyCar effort is going to be a new experience as they transitioning from Chevrolet to Honda power for 2014. On the news of being part of the Volkswagen Andretti Rallycross program, Michael Andretti stated, “I’m thrilled to be entering the series, and especially happy about teaming with Volkswagen. We are excited about our driver line-up of Tanner [Foust] and Scott [Speed]; I believe we have the best drivers in the series and will be a top contender.”

Volkswagen Andretti Rallycross has already stated the 560-horsepower Beetle race car will not be ready in time for the season opening Global Rallycross Top Gear Festival in Barbados. Instead, the will start the 2014 season running Polo R vehicles similar to the car Sebastien Ogier used to win the Monte Carlo Rally.