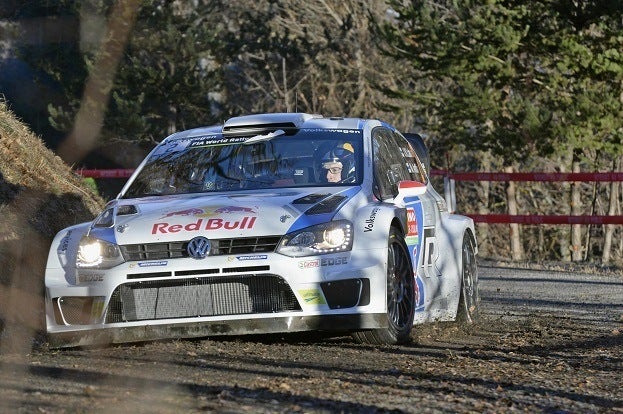 The 2014 Monte Carlo Rally route runs 1,396.76 kilometers in length but consists of 15 special stages representing the 383.88 kilometers. For the 2014 edition of the Monte Carlo Rally, reigning 2013 WRC driver title winner Sebastien Ogier, Mikko Hivonen and a former Formula 1 race winner Robert Kubica were some of the entrants vying for this year’s race across icy, snowy roads.

The 2014 Monte Carlo Rally started with former Formula 1 driver Robert Kubica claiming the opening two special stages. This first rally of the 2014 WRC season is a first outing for Kubica with his new M-Sport Rally Team. Possessing a 36.8 second overall lead over second place Sebastien Ogier, the third stage of the event threw a curveball to Kubica and his Ford Fiesta RS WRC race car. Finishing the 19.34-kilometer stint in 21st place, Robert Kubica fell to fourth overall. Ogier also struggling on the third stage, French driver Bryan Bouffier took the lead of the Monte Carlo Rally. A part-time driver with only six WRC starts, Bouffier’s skill has proved surprising to many as he sought to win the historically glamorous rally event in an M-Sport Ford Fiesta RS WRC. By the eighth special stage of the 2014 Monte Carlo Rally, Bouffier’s Fiesta RS WRC remained on top of the overall racing order. Sebastien Ogier, Robert Kubica and British driver Kris Meeke were in hot pursuit of the Frenchman as the rally entered a climatic stage nine. On the long and challenging 49.03-kilometer special stage, the 2014 Monte Carlo Rally was ultimately by the actions of Robert Kubica, Bryan Bouffier and Sebastien Ogier. After a promising start, Robert Kubica’s rally ended when the Polish driver lost control of his Fiesta RS WRC vehicle resulting in a crash. After leading the Monte Carlo Rally commandingly, Bryan Bouffier lost his advantage due to a spin on the special stage. As Bouffier struggled on the stage, Sebastien Ogier took full advantage sailing his Volkswagen Polo R WRC to a big stage victory. More than 22 seconds faster than his next rival on special stage nine, Ogier and co-driver Julien Ingrassia would build on that momentum.

By the end of the 15th and final stage of the 2014 Monte Carlo Rally, The #1 Volkswagen Polo R WRC would be triumphant with a 1-minute, 18.9-second interval lead. The win is the second time Sebastien Ogier and Julien Ingrassia won the Monte Carlo Rally but their first as members of the FIA World Rally Championship. For the Volkswagen brand, Ogier’s success was the first-ever overall win at the Monte Carlo Rally (Although parent company Volkswagen Group has been to victory lane with the Audi Ur-quattro rally car effort of the 1980s). “What a perfect start to the season! The team did a fantastic job. I am overjoyed. It is an amazing feeling to win the Rally Monte Carlo in these difficult conditions – especially now that the Monte is a round of the World Championship again.”, said Ogier as he delivered a solid salvo to the defence of his title.

Coming across the line with a second-best effort in the 2014 Monte Carlo Rally comes as Frenchman Bryan Bouffier could have tasted victory ahead of the special stage nine falter. Disregarding the momentum lost on that stage and reflecting only on Bouffier’s limited WRC experience, the runner-up spot was an outstanding effort that almost led to a major upset victory. For Bouffier, the second place finish betters his career-best second place recorded at the Monte Carlo Rally. Citroen factory driver Kris Meeke obtained taking the third and final spot on the podium in a drive nearly equally as awesome as Bouffier‘s. Meeke had previously won the Monte Carlo Rally as a Junior WRC class but the 2014 season opening finish is the Brit’s best in overall WRC competition.

With the 2014 Monte Carlo Rally in the books, the impressiveness of the event equals the following infographic prepared by Autoglass: