The world always needs superheroes. A being protecting us from evil, a hero who can exceed expectations to deliver outstanding feats. In the automotive world, supercars are the equivalent to Earth’s and the universe’s greatest heroes. The Audi R8, Lamborghini Aventador and the LaFerrari have personalities like Iron Man, Batman and The Flash in automotive circles.

At the 2014 North American International Auto Show, a modern hero returns with a new identity made possible by the seventh-generation Chevrolet Corvette Stingray. From the land of the Bowtie, the 2015 Corvette Z06 arrival in Detroit reveals a supernatural being more powerful than its predecessor.

Similar to Captain America operating as a human being at the peak of physical ability, the 2015 Chevrolet Corvette Z06 has been carefully conditioned to be at the pinnacle of American supercar performance. With the 2014 Chevrolet Corvette Stingray already a solid performer at heart, the Z06 treatment simply heightens the inner abilities of the recently released sports car. Inside what could be described as the Fortress of Solitude of the 2015 Chevrolet Corvette Z06, the two-seat cabin shares the innovative, performance-oriented look of the Corvette Stingray. The Driver Mode Selector system tailors handling and acceleration to a driver’s taste by adjusting elements such as traction control, Performance Traction Management and the electronic limited slip differential found standard on the 2015 Corvette Z06.

Covered by a hardtop for all-season driving, the 2015 Chevrolet Corvette Z06’s carbon fiber roof section can be taken off for wind-in-your-air exhilaration. 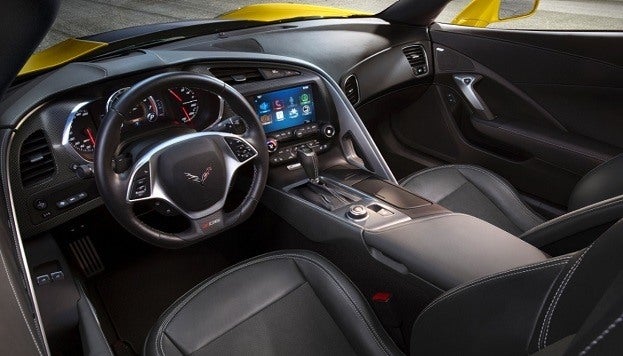 One thought that crossed my mind was General Motors could have used an upgraded LSA engine on the new Corvette Z06. However, I ultimately threw Chevrolet had something more exciting in mind; something more super. Sure enough, the 2015 Chevrolet Corvette Z06 is premiering a brand-new supercharged powerplant exhibiting many of the technological advancements found with the LT1 engine of the Corvette Stingray.

The supercharger and intercooler of the LT4 engine are integrated allowing it to be more compact. Maintaining optimum engine lubrication, the new Z06 once again uses a standard dry-sump oiling system. A seven-speed manual gearbox with Active Rev Match or an eight-speed, paddle-shifted automatic transmission is offered on the 2015 Corvette Z06.

Even as the 2015 Chevrolet Corvette Z06 premieres, a higher-end version of the supercar has been announced. The Z07 performance package model of the 2015 Corvette Z06 is perfected for track use. Larger winglets on the front splitter, Michelin Sport Cup 2 tires and carbon ceramic-matrix Brembo brake rotors are part of the Z07 performance package. According to General Motors, the Z07-equipped 2015 Chevrolet Corvette Z06 has recorded faster lap times than the 2013 Corvette ZR1.

With the attributes of a superhero in automotive culture, the 2015 Chevrolet Corvette Z06 is set to combat its main adversary called “slowness“. Influencing the all-new Chevrolet Corvette C7-R race car, it will only be a short time when we find out the true ability of the supercar.

Two Corvette C7-Rs will be entered in the 2014 Tudor United SportsCar Championship’s opener, the Rolex 24 at Daytona occurring at the end of the month. As for the production version of 2015 Chevrolet Corvette Z06, we will have to wait until the early part of 2015. Pricing will be announced closer to the car’s release date.