Leading into this week’s 2014 North American International Auto Show, one of the most anticipated production vehicles expected to debut was the Ford F-150 pickup truck. Accounting for 763,402 of the Ford brand’s 2.4 million vehicles sold in 2013, the new F-Series introduction is clearly the most important moment in Detroit.

Tasked with preserving the utility and ruggedness established in decades of production pickup trucks, expectations for the new product also sought a relevancy in the modern automobile market. Premiering Monday, the 2015 Ford F-150 seems to be the ideal balance of new and old.

At first glance, the 2015 Ford F-150 appears to be only an incremental change from the current truck; how looks sometimes deceive. Greatly toughened for 2015, the all-new Ford F-150 is constructed on a frame consisting heavily of high-strength steel. Allowing a stronger backbone, the use of high-strength steel for the 2015 F-150’s chassis provides a weight-savings of 60 pounds compared to the frame found on the current truck. Lighter weight construction is a hallmark of the 2015 Ford F-150 with up to 700 pounds shed through the new design. 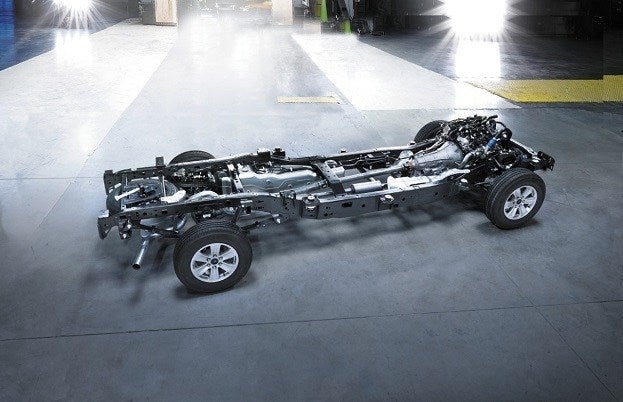 The new headlights and grille design of the F-150 is spawned from the 2013 Atlas concept vehicle. For the first time, LED headlights will be available on the Ford F-150 providing a greater field of night vision for drivers. From the cabin back is where engineers of the new F-150 worked their greatest magic. A new aluminum-alloy cargo bed offers a bundle of innovation traits.

BoxLink provides a series of metal brackets and cleats. Included for easy loading and unloading of large equipment such as ATVs and motorcycles, the 2015 Ford F-150 offers integrated loading ramps. A tailgate step is also built into the design of the 2015 F-150 that remains hidden when not in use. 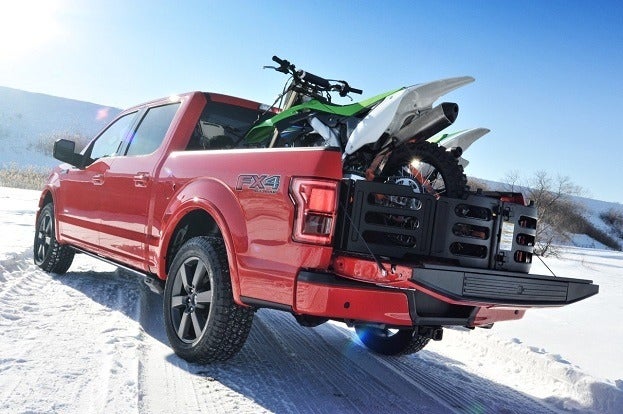 Last time Ford dramatically reengineered the F-150 for the 2009 model year, the auto company believed truck buyers would only understand the exhaust note of V-8 engines. A few years later, Ford realized they missed an opportunity to promote their technologically-savvy EcoBoost V-6 engine in their popular light truck. Putting a twin-turbocharged six-cylinder powerplant into the Ford F-150 for the first time, customers reacted well to the Ecoboost model’s 365 horsepower worth of output combined with impressive pickup truck fuel economy. 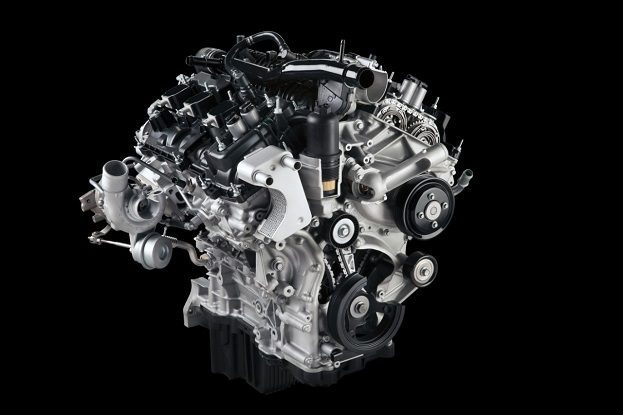 The second EcoBoost powerplant joins a full house of engine options available the 2015 Ford F-150. Also new for the F-150 in 2015 will be a naturally aspirated 3.5-liter V-6 engine featuring twin independent variable camshaft timing. The 3.5 liter EcoBoost V-6 and, of course, the 5.0 liter V-8 powerplant round out the four-engine line-up for the new F-150.

Thanks to the reduced weight, owners of the 2015 Ford F-150 can safely expect a more agile, better performing pickup truck. In addition to improved fuel economy, the 2015 F-150 will present optimized hauling and towing characteristics.

Adaptive cruise control, Blind Spot Information System and Lane-Keeping System are other aids available on the 2015 F-150. In case it is not clear enough the new Ford F-150 is not your grandfather’s pickup truck, an 8-inch touch screen system featuring MyFord Touch and SYNC can be added to the 2015 model year vehicle. 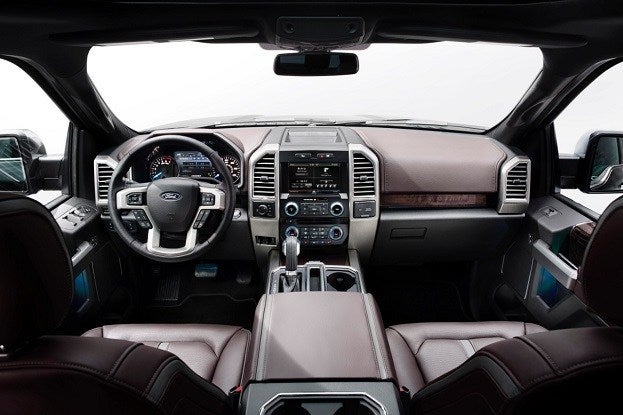 Set for sale later in this year, the 2015 Ford F-150 will be made available in a dizzyingly assorted amount of models. In addition to XL, XLT, Lariat Platinum and King Ranch trim levels, two-wheel and four-wheel drive as well as three cab layouts will give owners a broad amount of choice.

With the introduction of the 2015 Ford F-150, the 2014 edition of the Detroit car show is quickly becoming a truck showcase. On the weekend, covers were removed from the 2015 GMC Canyon exhibiting some standout technology itself.