Kia GT4 Stinger: From Sephia to Lust in 20 Years

When its GT4 Stinger Concept was unveiled in Detroit, Kia created something few – or I’m sure more accurately, no one – would have imagined when the brand’s first Sephia hit U.S. shores 20 years ago. It created lust.

Bolder and more aggressive, this low-slung coupe is an exciting snapshot of where Kia’s styling direction is headed. GT4 Stinger is arguably the hottest car – concept or production – the brand’s ever built.

Kia’s managed to pen the GT4 Stinger to look familiar and unique at once. Its grille is recognizable as a Kia, while vertical LED headlights and front wheel arches are mildly reminiscent of Chevrolet’s 2009 Corvette Stingray Concept. Transparent A-pillars grant better visibly for the driver, while black accents along the rocker panels help cool the rear brakes. The Kia GT4 Stinger’s glass rear hatch conceals a built-in partition and rear strut-tower brace. Rear tail lamps are LED-illuminated, and dual-exhausts ports are integrated into the rear bumper. The GT4 Stinger rests on 20-inch Pirelli P-Zero performance tires.

The Kia GT4 Stinger harkens back to a time when sports cars were more about being connected with the road than with our peers. The radio’s absence contributes to the interior’s simple, if not spartan, appearance. Engineers felt the symphony emitted from the engine and exhaust is enough music for drivers’ ears. Red-stitched pull straps replace conventional door handles, and the racy coupe has no carpet, just a rubber floor mat under the foot pedals.

What’s the likelihood Kia will green-light the concept car? Odds don’t look bad, if for no other reason than this sentence buried in the press release: “Kia has a history of delivering production vehicles that bear a strong resemblance to the concept that preceded them, and the GT4 Stinger provides a possible and highly provocative glimpse into Kia’s future.” Sounds like a good sign to me.

In looking at GT4 Stinger’s specs, it appears to slot between Hyundai’s Veloster and Genesis Coupe. It features 2+2 seating, a 315-hp 2.0-liter turbocharged four-cylinder engine, and six-speed manual transmission, remarkably familiar to Genesis Coupe. Here’s the kicker: the GT4 Stinger weighs 2,874 pounds, much less than a 3,362-pound Genesis Coupe and has a wheelbase that’s seven inches shorter at 103.1 inches. For comparison, Scion’s FR-S tips the scales at 2,758 pounds, Nissan’s 370Z weighs 3,278 pounds, and a Camaro Coupe comes in at 3,719 pounds. So, would it be a high-powered lightweight coupe or a larger pony-car contender?

I can’t be alone in hoping GT4 Singer gets built. Ultimately, however, it’ll be up to Kia to determine whether the market can sustain another rear-wheel drive performance coupe, regardless of the competition. With the Scion/Subaru boxer twins on the market, the new Mustang hitting showrooms this year, and a new Camaro and Nissan Z-car in the pipeline, if this hits showrooms, Kia’s marketing team will have their work cut out for them.

Nothing is impossible, though. This is the company that entered the United States selling the Sephia. 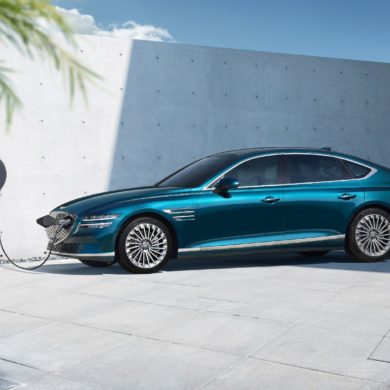