Dark city streets reflecting the bright colors of traffic lights and glowing skyscrapers off of the blacktop, driving through downtown towards some of the urban back roads.  Under the overpasses onto the outskirts of the skyline.  When I think of the modern Nissan Z, this is its territory… a proper backdrop to scare off some midnight 4 banger drivers.

It was, and still is, one of the most popular imports for modifying.  Since 2003 when the 350Z came out, it was a new animal.  Modern, and sleek while still being brooding and most importantly not taking itself too seriously. The car didn’t wear a goofy ridiculous grin, but it didn’t have its angry eyes on either… it had no need to! 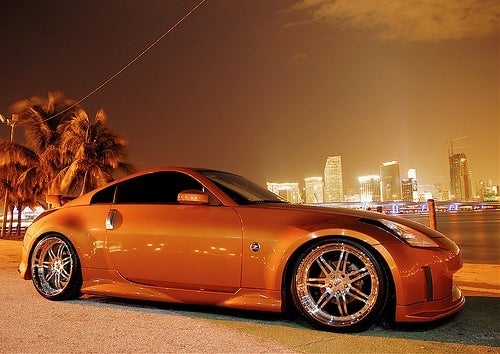 The same can be said for the new 370Z, despite a few more styling lines being drawn in, somehow Nissan captured the perfect working man’s sports car in this era.  They have a personality, that is deeper than the down-to-business blue collar looks, and that makes more of a bond between man and machine than anything else.  The Z knows what it is, and so do you, so it doesn’t need to go shouting about it…until you squeeze the right pedal down to the floor.  The old 3.5L emitted a growl I’ve never heard from a V6 before.  It was like the rumble from a massive thunderstorm echoing across Navy Pier.  However that’s not a very fun comparison.  But not to worry!  Because there is a newly tuned best of the best version of the 370Z, so we can use more similes!

Now when the 370Z came out it was touted for being much more nimble through the corners, unlike some of its German counterparts such as the revamped Z4, just to name one.  In addition to its new found agility, it also packed on some muscle in the form of 26 more powers of a horse from the last 08′ 350Z.  So the base model has 332 hp, but the Nismo edition has been trained well with more track savvy and more power.  Let’s take a look at how they made a great sports car even better. First of all, I apologize for sounding too much like Jeremy Clarkson ahead of time, but I must to describe this car. Now the base model may sound like a younger scalded lion, but the new in-house tuned version emits a sound similar to Arnold Schwarzenegger yelling through a Darth Vader mask.  In addition, the Nismo dual exhaust decreases back pressure by 30%, boosting performance.  I’ll just let you think about what that sounds like for a second.  Okay, so lets go over the specs for the newest edition of the Japanese muscle car.  Now I say new, but when they lifted the cover off it at the Chicago Auto Show, the only changes revealed were a couple red pin stripes, and grey accents.  The new styling accents are supposed to “define” the new Nismo line which also consist of the demographic deprived Nismo Juke.  The performance figures are the same, but I’ll go over them anyway just to help remind you why this car is the best affordable coupe on the market.

The 3.7L V6 is tuned up to 350hp, and although it only has a 7500 rpm redline, they claim to have advanced variable valve timing which improves airflow into the combustion chamber (stay with me) and improves torque. In layman’s terms, it improves the motor’s efficiency.  It produces 276 ft lbs of torque, and Nissan also claim to have an advanced “Viscous” limited slip differential to help put all that power and torque to the road during hard cornering. There are many other clever Nismo parts installed as well; the chassis is stiffened with stability bars and sport tuned suspension.  The aerodynamics have also been improved with a formed front splitter minimizing understeer, as well as a rear spoiler to improve stability and a rear diffuser that suck the car down to the road and increases grip. While having improved downforce, they have spent an abundance of time in the wind tunnel reducing drag as well.  It has a couple of driver aids as well.  The traction control is able to be turned off so fear not you tail-swinging, tire-smoking jackaloons!  It also has Synchrorev, which matches the revs on up shifts and down shifts for a seamless change, which I don’t mind on the Nissan, because it can be turned off and left to the driver. 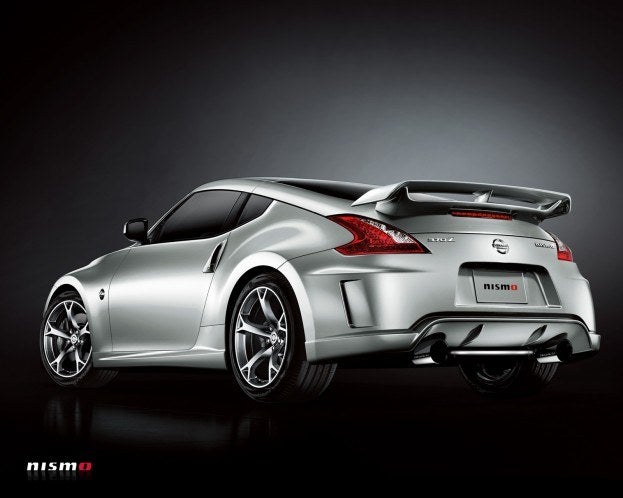 Everything about this new model reminds me of playing Need for Speed Underground 2, and I’ll explain why.  It is just the perfect blend of import tuner and muscle, which makes night cruising the perfect backdrop to this car. Somehow Nissan has given a mid-range sports car a bit of the epic appeal like a supercar has. It’s that car that you know you want someday when you’re younger!  With Japanese Nissan reliability and performance teamed with a bit of American persona, this car just fits cruising along Gulf Blvd… or showing up vtecs on the midland U.S. 31 cruising strip. It’s the Batman of blue collar sports cars – it owns the night.  So if you’re a fan of the previous Z models, a fan of the GT-R but can’t quite swing the price tag, or are just looking to avoid the common Mustang because they are all driven by cougars now, the Nismo 370Z is a perfect place to go.