The Mazda Miata has been around for 25 years and the new 2014 MX-5 Miata stays true to what made the drop top so popular among driving enthusiasts. What’s better than dropping the top and going for a spin on the weekend? For less than $30K, you can have a dynamic sports car that’s fun to drive.

This week we’re test driving the 2014 MX-5 Miata Grand Touring with a Power Retractable Hard Top ($29,450). The Mazda rep gave me a choice of a Black MX-5 with an automatic or a Zeal Red model with a 6-speed manual gearbox. I chose the latter of course! The Miata is a drivers car and I think it needs a manual gearbox to be enjoyed to its fullest.

The MX-5 Miata remains the same for the 2014 model year and only gets a few new color options. The MX-5 received a mild refresh in 2013, including redesigned front and rear ends. The 2014 MX-5 Miata is a carryover model. Not that it needs changing, because this two-seat drop top roadster is a fun car to drive and easy to like.

Inside the MX-5 Miata

The MX-5 cockpit’s fit-and-finish is tight and well designed and gets better materials than earlier generations. The Grand Touring’s leather seats are comfortable and the drivers seat has a height adjuster that makes it perfect for those who want to sit up a bit higher. Overall, interior quality and appearance are far beyond what loyal followers will remember from previous generations. 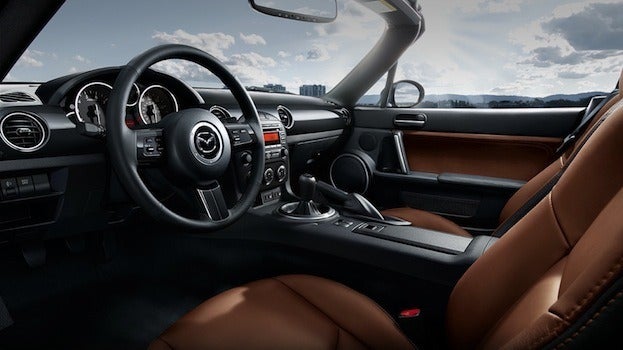 Once inside, the cockpit is roomier than it looks from the outside. The new  generation grew in all dimensions and we could tell there was more rearward seat travel that makes it easier for taller drivers to adjust the seat back far enough. A six-footer still has a notch or two of travel left.

Our 2014 Mazda MX-5 Miata tester came with the Power Retractable Hard Top (PRHT) that features a convenient composite roof that lowers in seconds at the touch of a button. Another big benefit of the hard top is the quieter ride inside as it reduces wind noise considerably over a soft top. Even over the bumpy dirt road leading to my house, the hard top was squeak free and had minimal outside noise. And it only adds about 80 pounds to the very light car. It’s easy to operate: With the car in neutral, you just pop the inside handle at the top of the windshield, touch a button on the dash, and in 12 seconds the top lowers itself into the truck space.

MX-5 Miata is a drivers car

On the road is where you can enjoy the MX-5’s reason for being. It features excellent agility and balanced handling that has made this a favorite among driving enthusiasts for decades. The rear-drive Mazda MX-5 has an ideal weight distribution of 51 percent over the front wheels and 49 percent over the rear in the power hardtop model. With the top down and engine winding on a mountain road, this roadster is hard to beat. The Subaru BRZ or Scion FR-S rear-wheel-drive coupes are the closest to the MX-5 in terms of driving fun, but they don’t offer a convertible.

The rear drive Mazda MX-5 comes with a 167 hp 2.0-liter four-cylinder engine that revs freely and delivers good throttle response when you need it. We chose to test the 6-speed manual gearbox and it’s the right choice if you like to drive. The current generation’s 6-speed gearbox has short throws and its easy to find the right gear. Mazda’s 6-speed is one of the best manuals in the industry and worked flawlessly with the high-revving 2.0-liter powerplant. Fuel economy is about average for this segment, with an EPA-estimated 21/28 mpg city/highway with the 6-speed manual transmission.

The 2014 Mazda MX-5 has a wide track and low center of gravity that enables it to corner flatter than you would think is possible. The Miata has always been a favorite car to take to the track. We took some tight mountain corners at fast speeds and the roadster held the curves without any body roll and stayed flat. Our MX-5 tester came with the optional sport-tuned suspension package ($850) with Bilstein shocks and a bit firmer ride and an increased feel of the road and hugs the lines like it was on rails. 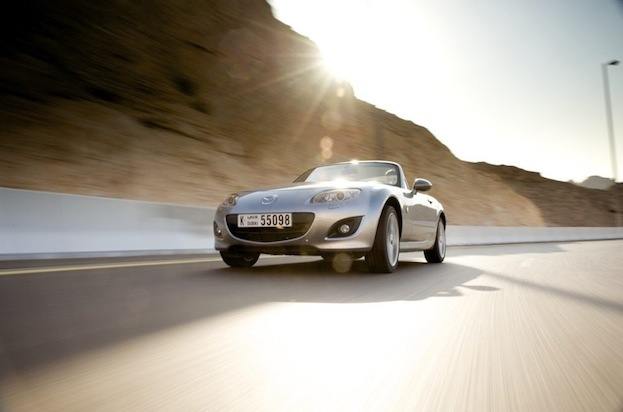 The two-seat 2014 Mazda MX-5 offers top-down driving enjoyment that much more expensive sports cars can’t exceed. Mazda has engineered an exceptional sports car for under $30K that’s hard to beat. It features driving dynamics that puts this drop top roadster high on the fun meter. Get the Power Retractable Hard Top and it offers reduced wind noise and increased security.