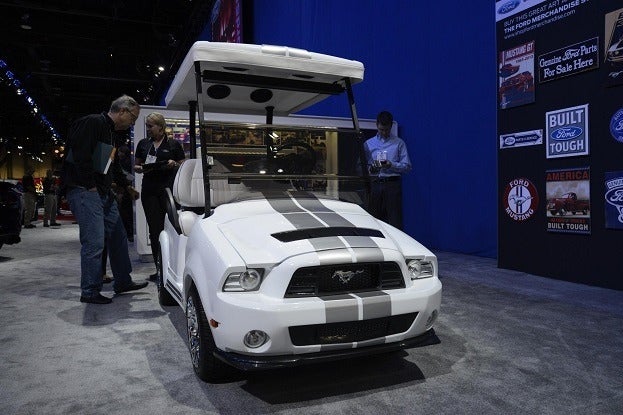 A 2014 model year Ford Shelby GT500 retails at $54,800. A bargain considering the 662-horsepower and 631 pounds feet of torque output from its supercharged V-8 engine, the price will discourage the notion of finding it as any type of holiday gift (unless you are perhaps in the Kardashian family). Is it possible to own some of the driving excitement of piloting a new Shelby Mustang at a fraction of the price? For golfers who have a Shelby Mustang or wish they had a Shelby Mustang, an officially licensed brings the performance persona to the golf green.

Recreating the modern muscle car on a smaller scale, the Ford Shelby GT500 Golf Car could be the particular edge some golfers are seeking on the course. While the front nine holes might not transpire to your wishes, it will be extremely hard to return to the clubhouse feeling like a defeated golfer behind the wheel of this unique Shelby GT500 themed machine. 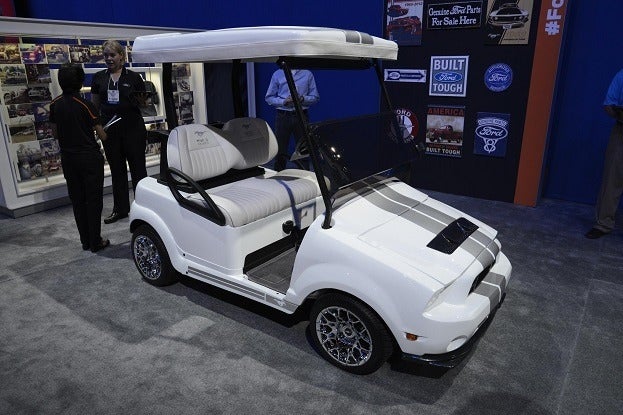 A two-seat non-street legal vehicle built on an aluminum frame, the Ford Shelby GT500 Golf Car features a front end sharing a remarkable resemblance to the real car. Working headlights and turn signals of the real Shelby GT500 is replicated on the golf cart. A body shell created from custom fiberglass, the shape of the Ford Shelby GT500 Golf Car is accompanied by PPG paint coloring as well as authentic Shelby GT500 badging and graphics. A fold-down windshield, golf bag attachment and sweater basket are golf cart touches added to the vehicle. The interior design is kept simple with a pair of ultra-suede/vinyl seats.