After years of stylistic dormancy, Lexus has been actively working to reignite the spark in the Toyota luxury brand. Changing the way we now see the letter ‘L’ in automobiles, Lexus awakened itself with the introduction of the GS model last year. As part of the 2013 Tokyo Motor Show, Lexus has revealed there most adventurous exploration of their new design language on a production car.

A 2015 model year vehicle called the RC, the all-new Lexus coupe signifies another luxury car division intent on separately defining their sedans and coupes. We can recall a similar event occurring at BMW with the prominent 3 Series Coupe called recognized as the 4 Series. The Lexus RC provides the market with the first traditional coupe since the SC 430 was retired in 2010. Taking three years to reassess their image of a luxury coupe, Lexus produced the RC to be an individualized vehicle. To be available as a conventional gasoline as well as a gasoline/electric hybrid coupe, the red-painted 2015 Lexus RC display car shown in Tokyo is worth the wait.

With dimensional differences to the GS and IS sedans, the Lexus RC adheres to a wider, lower stance. This is magnified by the opened, lower grillework stretching far out. The Lexus RC is longer than the IS at 184.8 inches but features a shorter wheelbase. The overall exterior appearance of the 2015 Lexus RC conveys sport and elegance. Shaping of the coupe presents a long hood, a smoothly swept roof flowing towards a small deck lid and some pronounced fender flaring gives the Lexus RC a high-class, premium look. The design of light housings and the rear air outlets are additional sharp touches commonly associated with performance cars.

Boasting the implementation of a high level of advanced manufacturing techniques to make its shape possible, the 2015 Lexus RC is constructed on a purpose-built chassis providing solid rigidity for performance driving. A double wishbone front suspension and multi-link rear suspension will provide the RC coupe with its handling character. The Lexus RC will be available with 18-inch and 19-inch wheels. 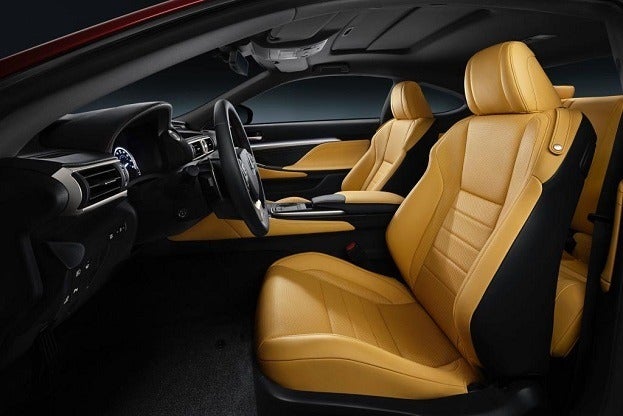 On the 2015 Lexus RC prototype car, a vibrant two-tone interior continues the Japanese automaker’s tradition of high-grade cabin designs. Contrasting colors and the use of materials such as Genuineshimamoku wood is unmistakably luxury grade. Seating of the Lexus RC is composed in a similar fashion as that of racing seats for a supportive and comfortable ride for occupants. An emphasis has been placed on interior lighting inside the RC. Reflecting upwards, the projection emits warmly around the coupe’s cabin beaming off the quality surfaces and materials. A seven-inch navigation screen and Lexus’ new Remote Touch Interface system is integrated into the instrument panel of the 2015 RC. The Remote Touch Interface pad had previously been spotted on the Lexus LF-NX Crossover Concept.

Scheduled to be sold in 2014, the Lexus RC line should compete nicely with the BMW 4 Series as well as a possible Cadillac ATS Coupe in the performance-oriented personal luxury car category.