As 2013 has progressed, the automotive world has embraced it as the year of the Chevrolet Corvette. Kicked with the fanfare of the historical 60th anniversary since the car’s introduction, the first 10 months of this year have been eventful for the Corvette.

As the 2013 model year model bids goodbye to the C6 body style, the Corvette 427 Collector Edition was launched as a high performance standoff. In January, the seventh-generation future of the Chevrolet Corvette was publicly revealed as the 2013 North American International Auto Show. The 2014 Chevrolet Corvette Stingray was an immediate showstopper even before the Detroit show started.

In Geneva, the convertible variant of the Chevrolet Corvette Stingray was introduced as an international message to the sports car world. Serving Indianapolis 500 pace car duties, the Chevrolet Corvette’s motorsport participation involved the securing the drivers and engine championship title in the 2013 Grand Am Daytona Prototype class using a uniquely configured race car.

With the conclusion of the American Le Mans Series at this past weekend’s Petit Le Mans, Corvette Racing captured the GT class team championship. Victory at the Mobil 1 Twelve Hours of Sebring for the Chevrolet Corvette C6R was also a moment in 2013.

In the collector car marketplace, auctions have hosted some big Corvette showings. Less than a week after the introduction of the new Corvette Stingray coupe, the advance purchase of the first 2014 car was secured for 1.1 million dollars at a Barrett-Jackson auction. A few months later, the first convertible model was claimed with a square a full million. At a recent Mecum car auction, a non-recent Corvette grabbed attention as a memorable vintage as well as for its one-of-a-kind history.

The top sale of the Chicago event held by Mecum Auctions, a 1963 blue Chevrolet Corvette Sting Ray styling car sold for 1.5 million US dollars. Selling for three times more than a 1969 Chevrolet Camaro ZL1 at the same auction, the spirited bidding was for a vehicle once belonging to the man many regard as the Chevrolet Corvette’s founding father.

A 1963 Chevrolet Corvette Sting Ray verified to be once owned by General Motor’s design czar in the golden age of the American auto industry, the Harley Earl vehicle was originally gifted to than-retired designer by General Motors. Behind the team that designed the 1953 Corvette, Earl offered little direct impact on the 1963 model that defined Chevrolet’s sports car as a new generation product.

Through this time, Zora Arkus-Duntov’s performance enhancements added the perfect addition to sports car Earl first gave form. Nonetheless, Harley Earl’s impact in creating the origins of the Chevrolet Corvette was something that continues to draw respect. 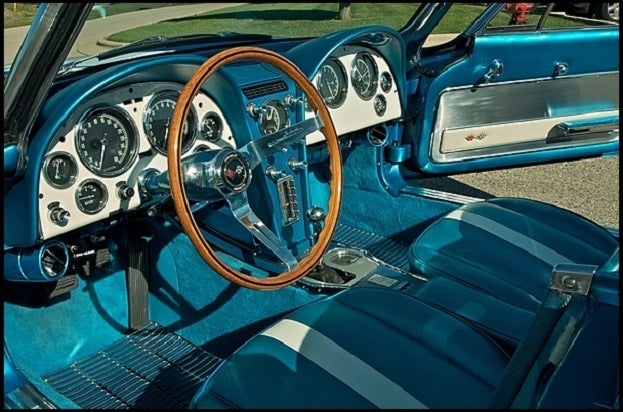 The most notable aspect on this Corvette Sting Ray was side exhaust pipes that are scarcely associated with the 1963 model year sports car. The dash treatment and gauges are also custom equipped on this special order Corvette. Along with having the benefit of factory acknowledged modifications, this 1963 Chevrolet Corvette Sting Ray is more than a mere garage dweller gifted to a popular figure.

Earl drove the sports car regularly and this Corvette was documented as a parade vehicle used in the 1965 Daytona 500 festivities.

The 1.5 million dollar price for Harley Earl’s 1963 Chevrolet Corvette Sting Ray is a marvelous testament to the 50-year-old sports car model. As 2013 nears an end and the 60th year celebration of the Corvette is concluding, this has definitely been some time for the car inspired by a fast naval vessel.