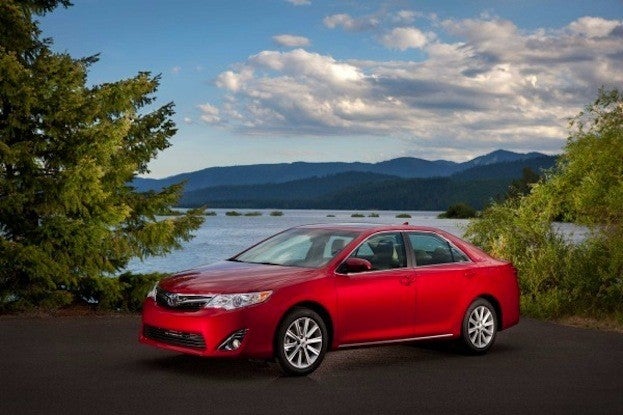 Let’s face it, the only reason to buy a hybrid sedan is because of the fuel mileage. But the new 2013 Camry Hybrid XLE has more going for it than just being a boring fuel-sipping car. But let’s start with what gets the electric motor going. The EPA rates the 2013 Camry Hybrid LE at 43/39 mpg city/highway and Camry Hybrid XLE that we’ll be testing this week, at 40/38 mpg. That’s good fuel mileage no matter how you slice it.

Table of Contents show
What’s new for 2013
Toyota is still the leader in Hybrid tech
Summary:

Toyota redesigned the Camry last model year and it carries over relatively unchanged for 2013 except for the hybrid sedan gets a rear cross traffic alert functionality as part of the optional blind spot monitoring system. Inside, Hybrids receive the six-inch central display screen as standard and soft-touch inner door panels. 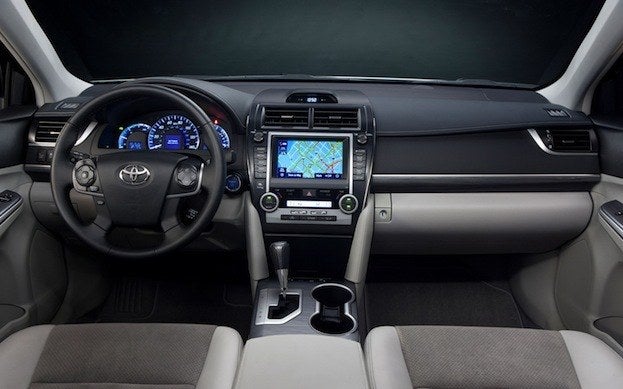 Where the Camry Hybrid was a surprise, came with the unexpected performance. The Hybrid isn’t a sports car, but it’s quicker than any hybrid sedan in the segment. Although there aren’t a lot of choices, it’s peppier than the Hyundai Sonata hybrid and the Ford Fusion. The Camry Hybrid uses a 2.5-liter Atkinson Cycle engine, with more horsepower and electric power than the previous generation. Toyota is still the leader when it comes to hybrid technology.

Toyota is still the leader in Hybrid tech

The 2013 Toyota Camry Hybrid 2.5-liter four-cylinder engine with 156 horsepower and 156 pound-feet of torque comes mated to an electric motor/battery pack. Together they produce a combined output of 200 horsepower.  A more efficient continuously variable transmission (CVT) delivers power to the front wheels. At lower speeds the hybrid powertrain can be propelled only by the electric motor, which increases fuel-efficiency especially in city driving we did around Denver. 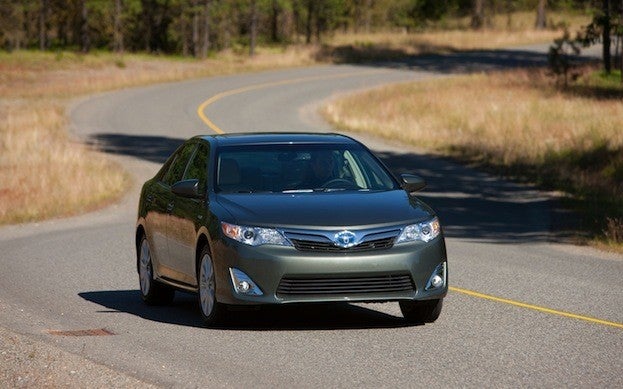 On the highway, the hybrid had enough punch to get up to speed on the onramps and handled going up I-70 west of Denver without losing power at altitude. On the flats, they hybrid will handle most driving situations adequately. The tuned suspension kept the hybrid sedan firmly planted in the corners and the bumps and ruts in the dirt roads leading to my house kept us undisturbed.

The 2013 model uses electric-assist steering that is precise and quick enough, though the lack of feedback can be too light for some drivers. Overall, the Toyota hybrid technology in the Camry is one of the most sophisticated and refined on the planet. The transition from all-electric mode to gasoline engine is less noticeable than in the completion.

If you’ve never driven a hybrid, the regenerative braking can take time to get used to. With not much pressure on the brakes, the nose will dive and you’ll be thrown forward unexpectedly until the driver gets a feel for the hybrid braking system. The hybrid can be driven in EV Mode, but we only experienced it operational in the parking lot and only with a full charge.

Overall, the 2013 Camry Hybrid XLE is a superb midsize family sedan with the latest hybrid fuel-sipping technology which is the reason to take a look at the hybrid. Toyota also offers a good alternative with the four-cylinder Camry engine powetrain that gets good fuel economy. So you should consider your needs and drive them both before you choose.