Almost 60 years since General Motors publicized their vision of self-driving vehicles at the 1956 Motorama, the pipe dream of a world where automobiles can handle the seemingly easy but realistically complicated task of driving. Google, Audi, General Motors and within Tesla Motors have been driving forward with vehicles that can be programmed to drive itself around town.

Though the technology such as the Audi Piloted Driving has been slow to arrive in real-world environments, a number of famous vehicles have given us a fictional account for how an autonomous car will work.

Without further ado, the following is a list of autonomous drive vehicles in fiction that makes the reality seem so much fun. Just as a heads-up, forgive me for not including any mention of the Transformers franchise. Although they would quality as autonomous vehicles, they are actually extraterrestrial robotic characters who assume automotive forms. 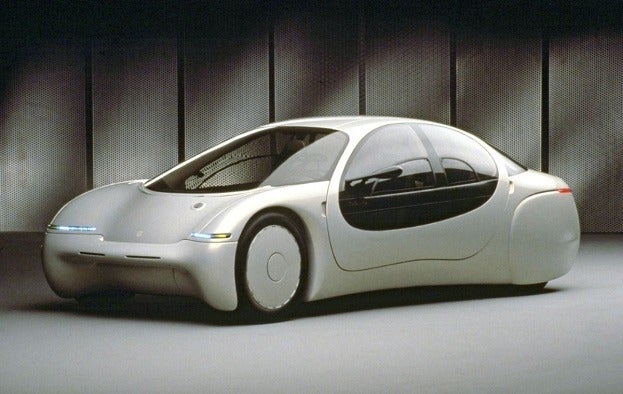 The GM Ultralite was created in 1992 as a four-passenger demonstration vehicle exploring what could be netted to the use of lightweight construction. Powered by a 111-horsepower two-stroke engine, the GM Ultralite projected the delivering of 100 miles per gallon fuel economy while maintaining modern sedan-like performance. More interested in the futuristic design, the moviemakers behind the 1993 sci-fi blockbuster Demolition Man pressed the Ultralite into service as a 2032 police car.

Requiring over 20 GM Ultralites to star alongside Sylvester Stallone and Sandra Bullock, the Ultralites used for Demolition Man further exercised liberties in the General Motors concept car‘s design. Unlike the show car, the GM Ultralite police cars were depicted as electric-powered vehicles with advanced cockpit technologies such as voice responding controls and video communications.

On several occasions, autonomous driving technology was engaged and disengaged using a voice command. A memorable action scene with Stallone and Wesley Snipes playing villain Simon Phoenix consisted of a fight while the vehicle piloted itself. Near the end of the scene, a self-driving element on the Ultralite police car also allowed a driver to command the vehicle’s movements through hands-free control. 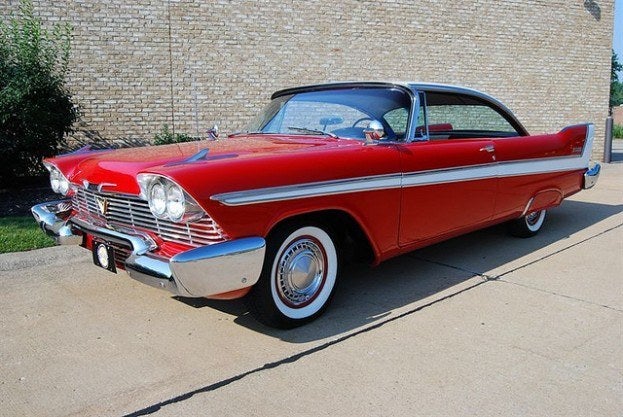 For anyone one has read or watched the 1983 movie adaptation of Steven King’s horror story Christine, the sight of a red and white 1958 Plymouth Fury instantly comes to mind. Christine (the name of the vehicle) would drive itself by means other than advanced electronics and guidance technology.

The 1958 Plymouth Fury was in fact a spiritually possessed vehicle appeared in control of itself throughout the movie. Apparently, it appeared a novelty when Christine allowed itself to be driven by a human. Recovered by Arnie Cunningham and restored to the disapproval of almost everyone, the Plymouth Fury that was Christine revealed protectiveness and an ability to regenerate itself.

Christine was characterized as a murderous vehicle who would not be deterred from maintaining a unique relationship with its owner. On its own, Christine killed numerous people and attempted to slay friends of Arnie.

In the 1983 movie version of Christine, a few of the on-screen deaths actually appeared understandable. I am wondering if I am the only one who felt little sympathy for the deaths of the punk teenagers in this movie who vandalized a classic car?

Unable to fly by himself, super hero Batman has relied on a trusted set of wheels to move around Gotham City. At a Barrett-Jackson Auction earlier this year, the Batmobile featured in the 1960s television sold for over 4.6 million dollars as a testament to the popularity of the star car. The Lincoln Futura based Batmobile is only one of several vehicles serving batman during more than eight decades of crime fighting.

Another popular look for the Batmobile was profiled in the 1989 Tim Burton directed Batman motion picture. An all-black vehicle profiled as a sports car, this Batmobile appeared in the 1989 movie as well as the 1992 follow-up Batman Returns. In addition to machine guns and a protective, retractable shield, this Batmobile utilized the ability to function without a driver.

On two occasions in the 1989 Batman adaptation, the Batmobile operated on a seemingly autonomous manner. During the second occasion where the Batmobile makes a dramatic assault on the Joker‘s hideout, it’s likely Batman programmed the Batmobile to not only travel but strategically fire its weapons.

The autonomous driving ability was used in Batman Returns although Penguin was briefly able to control the Batmobile remotely that would have to demonstrate existence of integrated controls. 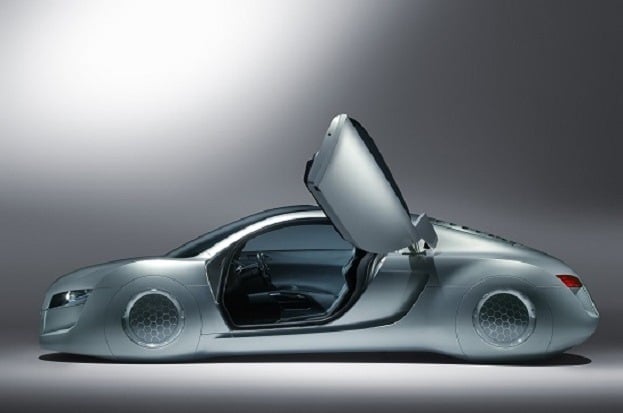 In the world of 2035, the Audi appears to have eclipsed Toyota, Chevrolet and Ford as the as a dominate auto brand. Even the Chicago police force has adopted Audi sedans in this city set in 2035. A rich product placement opportunity Audi did not wish to let spoil, the 2004 sci-fi film I, Robot starring Will Smith also featured a fictional, futuristic sports car.

Styled closely to the contemporary appearance of the Audi TT with some hints to the R8 coupe, the Audi RSQ served as the personal vehicle for police detective Del Spooner. Coordinating with Chicago in the year 2035, the Audi RSQ can operate on a self-driving program on highways.

Resembling the electronic highway concept of General Motors in the 1950s, this system might have worked in conjunction with a central controller. In the film, Det. Spooner deactivated the system while on the highway on two occasions demonstrating the Audi RSQ had a manual override driving ability even at high speeds.

Spooner’s Audi RSQ was largely totaled in an attack coming from a horde of NS-5 robots. While it was evident autonomous drive is used on 2035 roads, it was also clear collision detection technology was lacking. 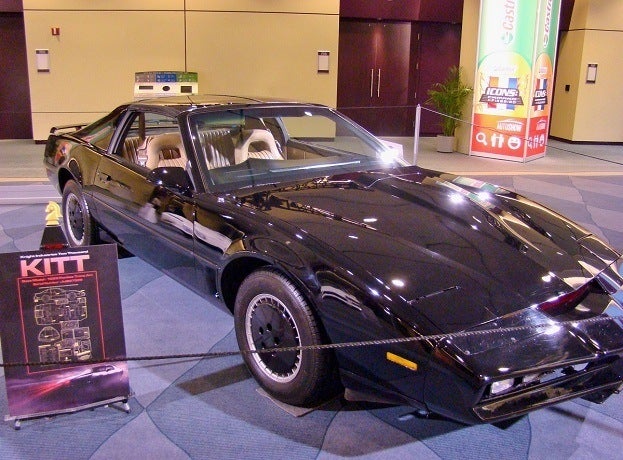 I will personally admit a black Pontiac Firebird Trans-Am was, and remains, one of my favorite television stars. A high-tech crime-fighting vehicle constructed by a wealthy, benevolent idealist Wilton Knight, KITT (an acronym for Knight Industries Two Thousand) was a television creation of the 1980s that still dazzles today.

Partnered with former police officer Michael Long (who adopted the last name Knight as part of his identity), KITT was operated within the Foundation for Law and Government “on a crusade to champion the cause of the innocent, the helpless, the powerless, in a world of criminals who operate above the law.”

KITT featured a continuously growing array of technologies to aid himself and Michael Knight on their journey for providing justice. With Turbo Boost and a red scanner appearing to be the most utilized tools on the vehicle, Auto-Cruise provided KITT total control of his own movement. Sometimes activated by Michael Knight, KITT often demonstrated the ability of triggering the self-driving mode himself.

Throughout Knight Rider’s run, the voice of William Daniels provided series viewers with the understanding that the artificial intelligence powering KITT is not only autonomous but also self-aware.

The original KITT was so human-like that the version used in the 2008 reboot of Knight Rider could not similarly replicate the endearing character. Personality only slowly developed with Knight Industries Three Thousand through the short run of the series.