If you’ve seen the Honda Crosstour on the road, you’ve probably cranked your neck and wondered what it was you just saw. The Crosstour is a bit unorthodox compared to other crossovers, but what does it offer buyers that others don’t?

The 2013 Crosstour received extensive updates to the exterior styling and interior that mimic the popular new Honda Accord sedan. But that’s where the similarities end. On the inside, the Crosstour has a very nice modern cabin with upgraded materials and very comfortable leather seats that come on the EX-L Navigation model. It’s what you would expect from Honda in the way of quality workmanship.

Table of Contents show
But it has some issues…
Benefits of the Crosstour over a sedan
The Crosstour on the road
Conclusion:

But it has some issues…

Because of the “unique” exterior styling of the Crosstour, Honda put a cross-brace for structural integrity in the rear window area, and it affects rear visibility. Honda tweaked the rear seat headrests but it’s still something that’s annoying and blocks the driver’s view of cars in your rearview mirror. The Toyota Prius has the same issue.

While we’re talking negatives, radio tuning is another issue that we didn’t like. Whenever it takes getting the owners manual out to adjust the radio, there’s a problem. Far too many touches and clicks are required to get where you want to go to change stations on satellite radio. Ok, I admit, I’m getting old. If you’re a Millennial, I doubt you’ll have an issue.

Benefits of the Crosstour over a sedan

The Crosstour seats five and has more cargo capacity than a sedan. With the rear seats folded down it offers 59.7 cubic feet of cargo carrying ability. The driver sits up higher than a sedan but not as high as an SUV. The Crosstour also has a big rear hatch that opens wide to the cargo area, while lift-over height at the rear bumper is lower than an SUV for easier loading of cargo. 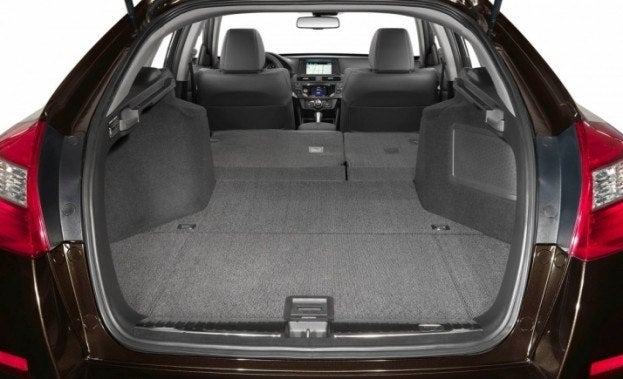 The Crosstour we tested for the week also came with 4WD (another benefit of choosing it over a sedan,) adds $8000 to the cost of the 2WD four-cylinder model. With all-wheel-drive, you get a crossover that’s actually a sedan, but looks more like a sport coupe. The only car like it on the planet is the BMW X6. No other automaker has copied this idea, which makes us wonder why. And the Crosstour isn’t selling all that well for Honda.

The Crosstour on the road

What we liked most about driving the V6-equipped Crosstour was its power and cornering ability. The 3.5-liter V6 produces 278 horsepower with 252 lb.ft of torque and comes mated with a six-speed automatic gearbox. The engine produces seven more horsepower than last years model and gets 19/28 mpg with AWD.

The Crosstour had lots of power for getting up I-70 out of Denver and into the foothills. When the gas pedal is pressed to the metal, it does what you want it to.

In the corners, the Crosstour’s double-wishbone front and independent multi-link rear suspension, along with front and rear stabilizer bars is precise and there isn’t much body lean.

The 3.5-liter, i-VTEC engine uses variable cylinder management to maximize efficiency, allowing the engine to run on three cylinders when that’s all it needs to maintain a speed. We didn’t get the kind of mileage that’s advertised around town, but we didn’t baby the tester either. 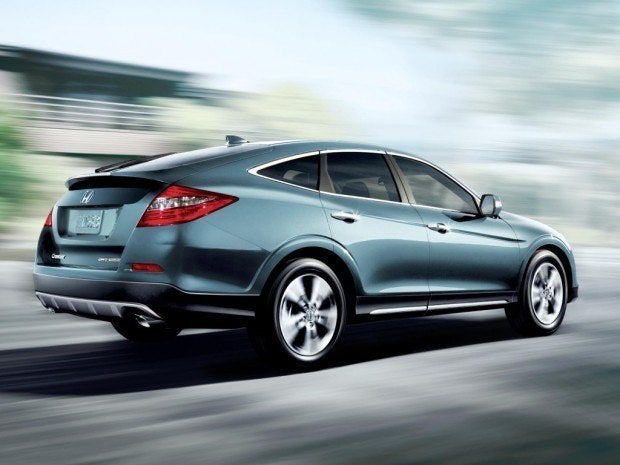 The paddle shifters with the six-speed automatic seemed a bit odd in a crossover, but were fun to engage during spirited driving in the mountains west of Denver.

The 4WD on this tester uses Honda’s fully automatic Real-Time 4WD, which sends power to the rear wheels only when there’s slippage at the front wheels. It’s a must for those who live in Northern climates. We could feel the increase in control on wet, dry and unpaved surfaces.

The 2013 Honda Crosstour 4WD EX-LN V6 is a unique automobile that will appeal to a niche market. It definitely has a place for the right buyer.

For someone who is looking for a coupe-like look, sedan-like ride, but with the utility of a crossover, the Crosstour is your vehicle. It offers more cargo capacity than a sedan yet feels more like a sport coupe. When equipped with the optional V6 with 4WD, it offers good power and control in all conditions. 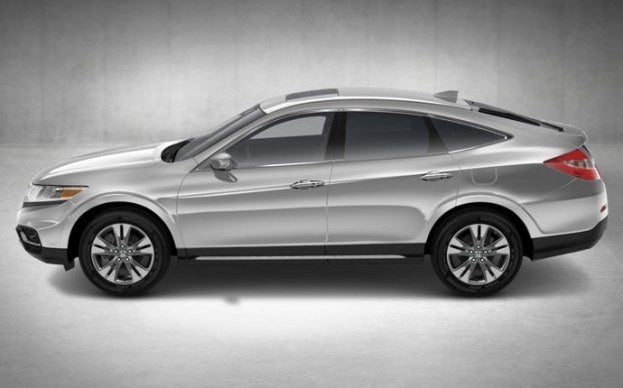